“In The Bleak Midwinter”

The “Pastoral” Demolition Is Already Under Way

In the last weeks the interventions of prelates have multiplied, demanding that the Church be “pastoral” in the sense of bending the rules.

In another post I have asked whether Francis is evil or stupid. It appears to me the same question applies to many other prelates.

Ed Peters has a ruthless examination of the extremely worrying (and provocative, and heretical) words of Archbishop Lorenzo Baldisseri. The latter is the new Secretary General of the Synod of Bishop, and thus one of the key people of Francis in the huge mess that is brewing.

Following the barrage of “pastoral sensitivity” started from “who am I to judge”-Francis – who suggested on the famous aeroplane some kind of “solution” would have to be found for public adulterers; for the record, he did not mean that they stop being public adulterers… – and after the vocal vomiting of German prelates and Maradiaga's ominous slogans about “less Rome”, Archbishop Baldisseri is the latest one to shell Catholicism with arguments of such stupid naïveté that one has no doubt he has the ear of Bishop Francis.

Please visit the link, and realise that what is going on here – not merely being vaguely imagined, but being executed as we speak, by creating a climate of impending, inevitable “change” – is the demolition of sound Catholic doctrine under the pretext of pastoral sensitivity, to be applied in every desired “particular” situation.

“Pastoral sensitivity” can't make what is wrong right, otherwise it's simply heresy. The idea that rules only apply in a theoretical sphere of lofty sermons, whilst the individual circumstances allow to de facto ignore them – very recognisable in ++ Baldisseri's words – is, asEd Peters points out, pure Antinomianism; that is, the belief that in the end God's rules don't count.

Baldisseri is also a typical Modernist in that he confuses the gullible Catholics (an awful lot of those) into believing that as the doctrine of the Church isn't being officially changed everything must be fine, and we are merely being “pastoral” and evaluating the “individual circumstances”. Deception, confusion, and claim of orthodoxy in the thinking whilst aggressively pushing heresy in the concrete action is the very mark of the Modernist. Francis, Marx, Voelki, Maradiaga, Baldisseri, & Co. all bear this mark and make of it ready use.

That in this way the rules become an optional, and the entire edifice of God's Church merely a collection of suggestions to be followed in ideal conditions, the gullible – again: the vast majority of them – will not see. They will sing their stupid sugary songs and thank God he has – as they believe, being rather stupid – given us Francis, the man so humbly massacring 2,000 years of Catholicism.

I fear the worst. Not the worst in the sense that the Pope will (try to) proclaim an heretical dogma, or the like; but rather in the sense that he will give licence to single Bishops' Conferences to do as they please under the guise of being “pastoral”. The constant public messages from people near the Pope (Marx, Maradiaga, now Baldisseri) and the announced extraordinary Synod make it very probable the Synod will allow the local churches to have that kind of autonomy that, even if it is not officially doctrinal, is certainly free to instaurate a praxis going against the doctrine.

“You all know the rules – Francis will say – but please feel free to be pastoral in the ways more fitting to the particular circumstances in which you operate”. No more than this is necessary to devastate the Church not only concerning communion for public adulterers – the first step, that will be immediately taken by the German, Swiss and Austrian bishops to save the proceeds from the Kirchensteuer – but one day in many other matters, following the ruthless logic of heresy. If communion is allowed to adulterers, why should the “blessing” of their “union” denied to perverts? If the blessing, why not the sacrament? Is communion not given, they will say, to the divorced and remarried?

The greatest wave of Modernism since its inception will, if you ask me, assault the church not in the form of doctrinal innovation, but of “pastoral care”. Demolition on the sly, and whilst being very humble.

May God have mercy on this bunch of despicable saboteurs and fifth columns.

Pray for the Pope, that he may come to his senses.

And pray God that He may soon free the Church from him if he doesn't.

The Most Jewish Pope 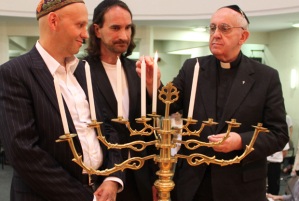 The celebration of Francis as a marketing tool has now found an echo in the Boston Globe. The competition is said to be “envious” of a Pope that is able  – and alas, all too willing – to accommodate everyone.

The most Jewish Pope, says the Rabbi, and who can contradict him. Different from our chap, who has the bad habit of thinking before he opens his mouth in public, says the Mormon. Hey, he even makes “pranks” (he doesn’t; but journalists must write fast and create a story), and is so different from the Presbyterians (who are the Presbyterians again? Ah, now I remember…). What a revolutionary change from the serious men of the past. So cool!

“At times, he seems to yak on about whatever comes to his mind, just as you and I do”, says the journalist. How wonderful! And by the way: no, I don’t do it. I don’t know about you, but when I open my mouth I always know what I am saying and why. A bad habit they taught me as a child. Uncool, I know. But they said only the stupid do otherwise. A promising red nose career, ruined.

The competition will now have to start thinking about countermeasures. A Twitter contest perhaps? Having Welby dance Tango? Should Mrs Schori present the next Academy Award ceremony?

A Pope betrays his role by being the clown of the world.  The world finds him entertaining, and approves of him. Therefore, say the secular media, the chap is really good. Others will have to learn his marketing tricks.

The Most Jewish Pope.

What do you want more?