← The Wrong Example
A Cardinal Has A Great Idea → 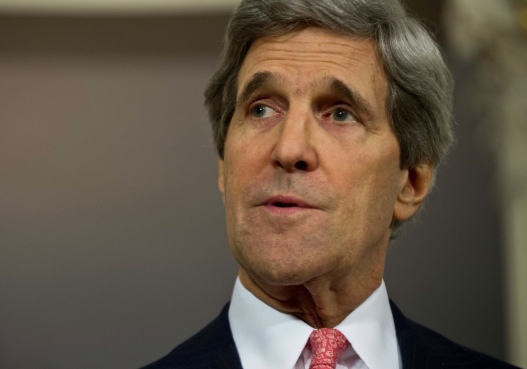 Boss, we have a problem…

If you are a type like John Kerry, you don’t have it very easy nowadays. You are, of course, determined to be the darling of two groups: Muslims and Perverts. But someone also informed you that you are a Catholic, and therefore a Christian; which means you’ll have to act in such a way, at least every now and then, that people continue to think you are.

Therefore, when Muslim terrorists massacre Christians in a big oil-and-Muslims-rich African State, you will have to be very careful how you deal with it, for example generically condemning violence, but without explicitly posing the issue of the persecution of Christians. Because if you do, people will pose rather direct questions about the “religion of peace”, to which even your boss would belong in all but name if he only believed that God isn’t called Barack O.

Not easy, but it can be done. Christians aren’t very noisy anyway. You will find a way.

But then it happens that that very same oil-and-Muslims-rich country adopts rather firm laws against Sodomy, rightly thinking that if you cannot have pedophile clubs and bar you shouldn’t even have “gay” bars, clubs, and the like, either. Inter alia, the law criminalises sodomy (like everywhere in the West before the Great Madness) and makes to a criminal offence public lewdness among perverts, something also considered natural everywhere in the West until very few years ago.

The punishments are severe. As they (erm, cough) bloody well should. Possibly a bit more; but hey, who am I to judge?

Now, as the Secretary of State of a chap thinking if there is a God, then it must be the one of the Koran, you are in a rather though spot. The Boss can’t be angered, and the Muslim populations in Africa and Asia – besides the growing and voting community of Muslim Americans – must be kept happy too. Then there are the more or less trustworthy strategic allies, who really don’t care a straw what you think about perverts. Look at Saudi Arabia, where sodomy can lead to the capital punishment, and you just never say a word! But when Nigeria introduces far softer measures, than something must be said, because the entire community of faggots, dykes and other circus tools will be up in arms asking that Body Odour and you, his faithful servant, to do something…

Ugh. Tricky, this one. Nigeria isn’t Russia. They are 50% Muslim! You can’t just throw the word “homophobia” around like you would with a Christian country! If you start openly condemning them, they will be very angry at you; and you don’t anger Muslims!

What you will have to do, then, is to express “concern” at the new legislation in a way that shows the perverts you are dutifully licking their plates, whilst avoiding the anger of the Muslim world, that could make of you the new Dubya in no times if you don’t pay attention. Causing a rather embarrassing internal problem, too, because if the Western Press starts making serious statistics about the legal treatment of Sodomy & Co. in (former) Christian and in Muslim countries, you truly are in trouble.

This can’t happen, can it now. Therefore, let us limit ourselves to some low-profile barking, that get noticed only among faggot activists; let us carefully avoid any mention of the situation of the Christians in too many African and Asian Countries; let us look like the good-hearted teacher who tells his pupils to be silent and never manages anything, but everyone thinks he is so nice and so full of reforming zeal…

Kerry is skating on thin ice here. He had better pay attention.

Muslims are very easy to displease.