← Reality And Delusion.
Big Brother Is About To Knock At Your Door →

Well, I Had To Smile… 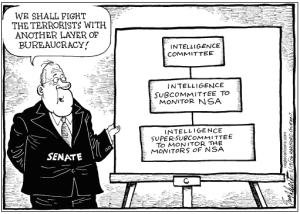 The way the Bishop of Rome starts to tackle administrative simplification in the Vatican is by…  creating another administrative layer and using the usual tricks of the political trade: a new organism with a new name, more red tape, and lots of grandiloquent talk.

Both IOR and APSA remain (obviously; only revolutionary nutcases would have thought the Vatican would close its own bank), but now there is an Ueberministry  meant to do what was supposed to be done before, too. Or do you think before today there were no auditing, no controls, and no accountability rules? Cue subterranean power struggles for who gets the money to spend, and who controls whom. That at the end someone might be held accountable, is not certain. The Commander-in-Chief is one who puts his perverted buddy at the head of the Vatican bank, and leaves it there when the scandal erupts. Oh yeah, this is the one who wants to clean up the Vatican.

This reminds me all too much of the usual politicians’ reaction: let’s change some names, move a couple of offices here and a couple of competences there, and create a new organisation with a new name that we can put on our flag.

The height of the hypocrisy is to say  the wealth of the Vatican must be used to help the needy. Clearly, someone seems to think up to yesterday it was used to buy Mozzettas.

Now don’t get me wrong: it might even be that in future corruption in the Vatican will be reduced, and accountability become more effective. But as always, if this happens it will be because there is a real will to make it happen and men willing to fight for it; not because more red tape has been created, more potential for conflicts of attribution and rivalry between various organs has been generated, and a new name has been fed to the press.

I hope the transparency begins by telling us how much the army of consultants hired by Francis is costing. Hey, “the Church must use its wealth to help the poor”, so one thinks he is entitled to know…

I will wait for the results for a very moderate amount of confidence. For the moment, I notice the methods are the same used everywhere else.

At least we have some good news: at the head of the new Ueberministry was put Cardinal Pell.

It could have been Maradiaga.

← Reality And Delusion.
Big Brother Is About To Knock At Your Door →
Loading Comments...