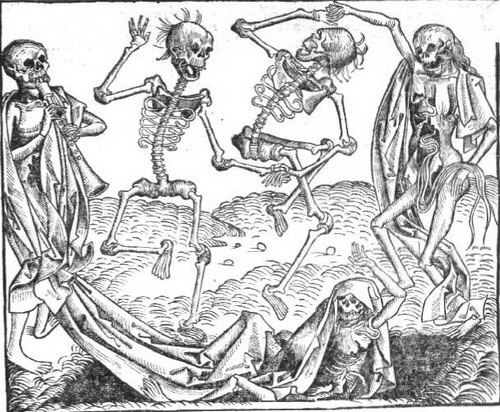 There was great joy in the cemetery.

I am informed via Father Z's blog that in France the President has authorised a woman to marry a man.

Whilst this should be the normality in every country whose people can use their brain – even in France – in this case the matter is made somewhat unusual by the fact that one of the two happy people who are supposed to pronounce the oui ( or “je le veux”, or whatever it is) is without the shadow of a doubt either in a very advanced state of decomposition or – if from an atheist background, say, or works of mercy have been deemed a waste of time and money – reduced to very fine ashes these past two years.

Now, what makes our women-chasing hero, Monsieur Hollande, think that a bunch of bones, or a handful of ashes, may pronounce the words “I do?”. It is, apparently, a rather absurd law of 55 years ago, (ill) conceived to allow the “marriage” of betrothed people on occasion of a big tragedy that cost the life of hundreds.

I am no canonist, but I cannot imagine that the simple intention to marry one day in the future can reasonably translate into a marriage; not one inter vivos, much less one between a living bride and a long deceased corpse. Many are the marriages called off at the last minute, and with acute instinct the popular mind identifies in those very words, “I do”, the confirmation that the will to marry is actually there, thus wonderfully matching the common sense with the legal status; because if the magic words in the proper setting are not there I am sorry, dear lass, but you are as much unmarried as before.

Now, I will spare you the jokes about the great joy in the cemetery, and the Bridegroom inviting its entire population to a danse macabre after the ceremony. What concerns me is that something that 55 years ago was probably seen as a – strange and creepy – way to protect marriage is now probably seen as another way to extend marriage to pretty much everything under the sun.

In the same way as the UK wants the death of the EU as a political organism by allowing Turkey to become part of it, the secular society wants the death of the institution of marriage through “inclusion” of the most outlandish things, from the absurd concept of a dead bridegroom to the far more absurd concept of two wannabe brides or bridegrooms, to the future frontier of geometrically enriched (triangles, or quadrangles; the sky, or the circumference, is the limit) “marriages”.

I want to hope this marriage “par ordre du mufti” does not have any legal consequences of sort; but again this is France, so you never know.

It is also interesting to reflect where this might lead to. For example, there could be some business in matching deceased people. A company called, say, “happy coffin” might talk with the bereaved, who would then – based on the matching profile of the “couple” – decide that Aunt Agatha' and Uncle Freddy would have wanted to marry, if they had met; which, unfortunately, they didn't, but I am sure Monsieur Hollande is no man to be discouraged by this little detail. A letter to him, et voila'. The putative husbands will, rather probably, not be asked.

Therefore this little episode, in itself only the result of a monomaniacal and rather macabre bout of emotionalism of a non-widow, can well be considered another nail in the – erm, well, (cough) – coffin of marriage as God intended.

Which – whatever Monsieur Hollande, mad members of Parliament or a wannabe widow want you to believe – is the only one there will ever be.

I am informed that Mario Palmaro has died.

I have written about his and his colleague Alessandro Gnocchi’s brave stance for Catholicism.

At that point Palmaro, born 1968, was already very ill. You will remember that Francis called him on the phone.

Mario Palmaro wrote a long, stellar article in January for the Nuova Bussola Quotidiana. Those of you who speak Spanish might be able to navigate through the article. [edit: Rorate Caeli had published a translation].  If memory serves, I did not comment on it because, notwithstanding having so many interesting ideas, it was closely linked with the Italian political landscape and made rich use of Italian imagery (football, or soccer, Coverciano and the like).

The entire article is absolutely excellent, but the worry of the father of a child of seven in a country now openly gradually “opening” to sodomy is very moving; particularly so, when coming from a man knowing he will soon not be able to make his best to provide for the necessary guidance. Obviously, Palmaro would not mention his impending death.

Let me mention and translate only one of the many stellar statements of this article: as some of you will know (now, but probably not back in January) Matteo Renzi is the rising Star of the Italian politics, and has just become the Primo Ministro.

“Do you understand, dear Editor? Soon they will take my seven years old child at school and they will make him play with condoms and his own genitals, and what does the Church talk to me about? Of the boats sinking in Lampedusa, of Jesus who was a refugee, of an obscure Jesuit of the XVII Century just beatified. No, my problem is not Matteo Renzi.

I have found the article and now link to it to its entirety as a small tribute to this great Catholic.

He is now at the end of his battle. I am against the canonisation of the dead, so I will not give you any of that sugary stuff. Let me say that from what I have learnt of him, I would sign any time for his same chances of making it to Heaven, and would consider it a great privilege and a great improvement of my own chances to be allowed to do so.

Please pray for him, his family, and his little child.