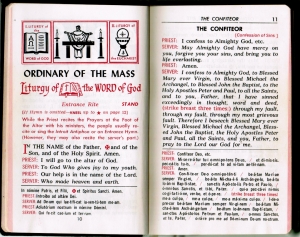 Father Carota reports that two boys of Seven can be excellent altar boys for the Traditional Latin Mass.

So: two smart children can learn how to say and do everything perfectly in a highly structured liturgy like the Traditional Latin Mass; but there are millions of people ready to believe that fifity or sixty years old men and women, many of them with professional qualifications or a degree, and all of them provided with smartphone, are not able to read from a Latin/whatever translation of the mass and get acquainted with the most beautiful thing this side of heaven.

How could we come to the point that every nonsense must be believed merely because it looks “sensitive”? The answer is very simple: because in the effeminate society of today even men want to look like women, and it should not be said of them that they do not “feel” for the poor old things who would have the shock of their lives if they had to do some easy reading work.

This, apart from the fact that it is not really necessary to even know what the priest is saying: countless illiterate peasants have gone to heaven with far less knowledge of Latin than these old Sixty-Eighters can get in thirty minutes if they put in the exercise the same attention that they put in the instructions of their latest smartphone, or X-box, or tivo box, or whatever. But hey, the illiterate peasant never thought the world had to adapt to his whims, either.

Enough with the “sensitivitee”. I long for a time when the OF will mean Only Form, meaning the TLM, and old men and women will be told to move their spoiled ass and read a Latin missal like everyone else.