← Pope Chamberlain The First: A “Judgemental” Blog Post.
The Remnant On The Gathering Storm →

No Sense Of Shame: Brothel Without Boobs 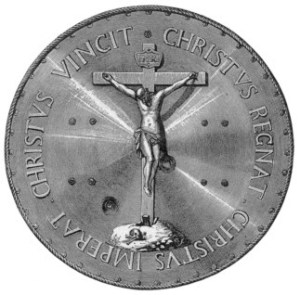 Read on Rorate about the latest antics of Cardinal Dolan (already mentioned on this blog). The key passage is this:

Cardinal Timothy Dolan of New York praised University of Missouri football star Michael Sam for coming out as gay, saying he would not judge the athlete for his sexual orientation. “Good for him,” Dolan said in an interview with NBC's “Meet the Press” airing Sunday.

“I would have no sense of judgment on him,” Dolan continued.

1. Dolan mentions, as Satan himself would do, the Bible. His Christianity is the hearsay version, “do not judge”. Dalai Lama style. Francis-cum-Nelson Mandela. Woodstock galore.

3. He (Dolan) puts on the same plane faithful spouses and clearly sodomite – at least implicitly – athletes. “Bravo”, he says to both.

You see? The ones follow the Bible by being chaste spouses, the others follows the Bible by inserting their accessory into the dirtiest hole (and probably, not the only hole) of another man (and probably, many men). Both of them – the chaste couple and the sodomites – are, says the Cardinal, deserving of praise.

No sense of judgment. Bravo.

Now: if the athlete had said “I am afflicted by a homosexual attraction, but I believe all that the Church believes and will therefore avoid the sin of sodomy and pray the Lord that he may give me the grace to overcome this affliction”, the Cardinal would still have been wrong, because homosexuality is a sexual perversion and something about which one does not go about giving scandal. Would the Cardinal say the following words about a person who had outed himself as a pedophile?

“God bless ya. I don't think, look, the same Bible that tells us, that teaches us well about the virtues of chastity and the virtue of fidelity and marriage also tells us not to judge people. So I would say, 'Bravo.'”

But it is actually far worse than that. Dolan's satanical words are clearly an endorsement for the homosexual lifestyle, proclaimed and lived in scandal. This is a Prince of the Church. What times we live in.

It seems to me here that the Francis effect is making all his devastating effects heard. Cardinal Dolan would very probably never have dared to say anything similar to this, had Benedict been still in power. But now that a new wind is blowing, our over-nourished weathervane promptly changes direction, and plauds sexual perversion in the spirit – not the actual words; but the spirit, yes – of what Francis says.

And so the game goes on. Francis starts the mess and clearly indicates, without going all the way, where he wants to lead the Church. His colonels promptly take the hint, and deliver. Lio ensues.

In the nuChurch of Francis that oh so sharply condemns careerism, they are all aligning to follow the new party line, knowing the man will reward a certain type of prelate. They know the Peron in Rome will appoint others like him to bishops, archbishops and cardinals. Dolan obviously has one aim in mind: to be the new Humble One. I doubt he will encourage the practice of fasting, though.

When I think of the Vatican hierarchy of today, “Brothel without boobs” is what comes more frequently to my mind. No, it's not a strong image. I'd prefer the chances of salvation of any prostitute than those of Cardinals like this one.