How Is This “Charitable”?

Please go on “Protect the Pope” (please, please do!) and read there about the “Tablet” correspondent now suspended for calling the Pontiff Emeritus “The Rat”.

Now, please let us understand ourselves here. I am not prone to any form of Papolatry, or excessive deference to the Pope whenever one thinks that the Pope is seriously damaging the cause of Catholicism. I have written here very often, and will continue to do so, that we must not be blind, and if a Pope behaves like, say, a clown we must call him out as clown even if he happens to be Pope, because the fact that he is the Pope makes it so much graver that he acts like, say, a clown.

I also have no doubt myself that this papacy is an utter disgrace for the Church; that with it God is punishing us; that we are going to go through terrible times. I have also made no mystery of the fact that I wish the end of this Papacy, because I am persuaded that the danger of a new conclave is preferable to the danger of the continuation of this papacy, with the attached appointments of cardinals and bishops. I do not need to remind you that a faithful Catholic has the right to ask the Lord for the painless death of the Pope, if he thinks that this Pope is gravely damaging the Church. It goes without saying that the same faithful is not for this reason exempted from praying for the eternal salvation of the very Pope he thinks it would be better to see six feet under. In my case, I am so astonishingly soft that I limit myself to pray the Lord for the restoration of Tradition, which theoretically includes events like the conversion of the Bishop of Rome to sound Catholicism, or a judicious toccatina (“little touch”; that's how Italians call a small, but worrying heart attack) or other problem leaving him healthy enough to care for his soul, but suggesting to him that he steps aside. Basically, I am being as soft as the final aim I am praying for allows, but I still wish the attainment of the aim in precedence to the Pope's life. Yep. This, just in case you think I am a retiring wallflower thinking we will advance spiritually if we drink the same brand of mineral water as the Pope, or none if he drinks none.

I have, though, three observations to make.

1. The way I see it, every criticism of the Pope must concern something he does or says or thinks. You criticise the Pope for a reason, the reason generally being that he has said or keeps saying or thinks of doing something damaging for the faith and the souls of Catholics. But not even this robustly critical Southerner can condone the comparison of the Pope with one of the most universally despised animals on this earth; a comparison made in a fully gratuitous way, as purest name-calling. This is not the reaction to something outlandish that Benedict said, and that called for such a comparison (for example: if the Pontiff Emeritus had hypothetically extolled the merciful life and familial ties of rats; or their being non-judgmental; or their smelling like the canalisation; or the like). No, this is simply a very gratuitous, uncalled for, insulting way of calling a Pope Emeritus. If he had called him “Pope Holy Water”, or even “Pope Mozzetta”, or “Pope Bespoke”, at least one would see there is a criticism there of a certain way of seeing the Papacy; there would be a message. What, however, Mr Mickens writes says nothing more than his despise for Benedict, full stop.

If the usual Papolater criticises the words Mr Mickens uses, is one thing. If after what I have just written even I am scandalised, it might be quite another.

2. The Mickens' type of people are those always ready to accuse Catholics of being “uncharitable” for not wanting to cope with every kind of abomination or scandal. How this should be “charitable”, is beyond me.

These alleged “tolerant” people generally are the worst. Mr Mickens seems no exception.

3. I truly hope Mr Mickens does not lose his job because of this. Whilst this is bad, and very bad for a journalist, if this is his livelihood – as it generally is – I truly hope it will not come down to that. Let him apologise and pay more attention in future, but it would be bad if Catholics would now call for such a crisis in the life of a man who could have a wife, children and/or a mortgage, because of a very stupid Facebook message. Firing Mr Mickens would not change the Tablet, for sure.

You see, perhaps we “intolerant” people are those who, in the end, have more sense of proportions even towards those who have no sense of decency.

Comments Off on The Wrong Example

Comments Off on Refuting The Absurd

We Cry For You, Argentina!

In the land of boorish populism, Pinocchio masses and Tango masses,  (you will see a familiar face in both I am afraid) it was only a matter of time before this here happened: two lesbians having their own child baptised and being confirmed themselves.

Now, I have already written about the fact that a priest is supposed to baptise if, and only if, he thinks that the child has a reasonable, well-grounded hope to be raised in the Catholic faith. Say, two Jews are thinking of conversion, but they want their offspring to be baptised and raised as Catholics in the meantime. I never got a problem with the fact that Felix Mendelssohn and his siblings were all baptised before their parents converted to Christianity. In that case, it made sense to do so, and there was more than solid ground to believe the children would be raised in the Christian (if, alas, not Catholic) faith. But this here is beyond belief.

Firstly, one must ask how well grounded is the chance that a child will be raised in the Catholic faith if the people he lives with are the very epitome, and very publicly so, of all that the Church opposes. This is as if Stalin would have asked for his son to be baptised; with the difference that in Stalin’s case one might have hoped the mother of a child was a closet Christian; no risk of the sort here.

There isn’t much to say here: this is how the Church of Bergoglio sanctions abominations under the disguise of “mercy” at all costs; only in isolated cases at the beginning, and more and more frequently in future, so that if this disgraceful papacy is allowed to continue it is not at all unthinkable that in five or ten years time such exercises will be the norm, and every fag and dyke in the land will feel authorised to be extremely incensed should a priest deny the baptism to the child, or the confirmation to them.

For the record: I think such a baptism is madness. It would be a madness even if the godfathers were Catholics of unimpeachable credentials; but in this case the godparents seem to be friends of the “family”, so they are perverts by association, full stop. That one of them is supposed to be Ms Kirchner already says it all about what is going on here.

The sacraments only have sense if they are given in conformity to the sense and function they have. If everyone should be baptised just because he is born, then I wonder why Francis does not proceed to a declaration of Automatic Universal Baptism of All The Unbelievers In The World Upon Birth and be done with it. At that point, you can give communion to every public adulterer because of the hope some sacramental grace may flow from the desire of the adulterer to receive communion, and give give the sacrament of confirmation to, say, avowed lesbians (I know, it’s absurd; just making a point here… I hope…AAARRRGGHHH!!!)

You will say: “but Mundabor, this is not how it works. You just can’t give baptism automatically to everyone”.

I know, it’s not how it works.

Exactly this is the point. 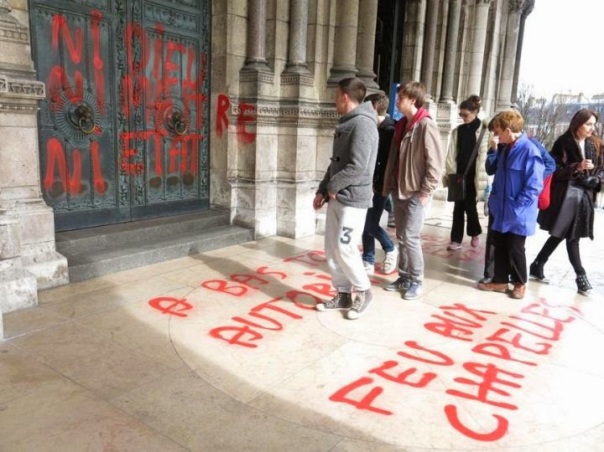 The sensitive natures among you had better not to follow this link, containing Messa in Latino's blogpost – and many shocking images; a number of them containing nudity, and nudity in church – about the desecration and vandalising of one of the most famous churches worldwide, the Basilica of the Sacred Heart in Montmartre, Paris.

In a shocking (absence of) reaction that has been linked to also in the article, the Cardinal of Paris minimises the events, in substance saying that not Catholicism per se is the target, but rather this is generic “anticlericalism” that has, this time, expressed himself in the vandalism and profanation of a Catholic church; but hey, it could have been a Mosque, right?

In doing this, Cardinal Vingt-Trois follows the most basic instinct of the Western clergy: minimise, stick the head in the sand, and hope the problem goes away by itself.

Things are happening in France and all over the West that would have been unthinkable only a decade ago. The shepherds do perfectly nothing. Instead of giving three interviews a day and declare open war to the open anticlerical spirit of the French government (as abundantly documented in the linked article: I spare you the disgusting details) and demanding that the people rise against this desecration and shame, the Cardinal deflects toward a vague, very effeminate whining about some generic people who, in some generic way, seem not to like the generic notion of religion. Pissing on the altar and writing blasphemous and obscene phrases on the very floor and wall of the Cathedral must then be considered a generic expression of generic anticlerical spirit. They haven't anything against us, you know! Phew!

One does not know who are the worst enemies of the Church, the idiots desecrating it or the prelates surrendering to the mob without any reaction worthy of the name.

The persecution is not coming because of the people who would love to burn churches to the ground. Those have always been around. During the decades of Communism there were probably many more of those around.

The persecution is coming because those who have been entrusted with the defense of Catholic values and places of worship have chosen to be silent.