Is The Pope A Jesuit? 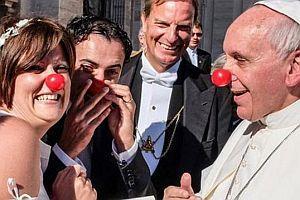 For some reason, not everyone took the Pope’s words at face value…

This is the answer Francis allegedly gave to the request of the parents Manelli, with six among their children members of the order.

“Holy Father, we have nine children, six of whom are consecrated among the Franciscans of the Immaculate. We beg you, take them out of the sepulchre.”

Now, what this means should not be difficult to understand: the persecution of the FFI will “soon, soon” come to an end.

Only, the Bishop of Rome is a Jesuits, and to Jesuits words mean what he want them to mean in the moment.

Therefore, it might well mean that the FFI are about to be – say – merged with old Sixty-Eighters of some other dying but still numerous order, or forced to adopt a lax rule, or forbidden from celebrating the Traditional Mass, or a lot of other evil things.

All of them meaning, for the Jesuit Pope, that the FFI have been taken out of the sepulchre of Neo-Pelagianism, bi-dimensional holy card attitude  and – horror! – rosary-counting that was afflicting them, and preventing the “Spirit” from operating in them.

Obviously, it can also meanFrancis has decided this is a battle he cannot win and it is better to get some neocon to believe in his conservative credentials by putting an end to the Volpi-treatment than to have this thorn in his side for the rest of his pontificate.

Most probably – says yours truly – Francis was simply doing what he does all the time: agree with his interlocutor now and never care tomorrow of the rubbish he has said today. He might stop the persecution of the FFI if he sees the price is too high. But in this, what he has said to the Manelli parents will probably play no role. They wanted to hear something, he was happy to oblige.

Generally, Francis does not know what he says himself. How can we?