The “Gang of Eight” is going to meet again after the disgraceful canonisations of John XXIII and John Paul II.

They want to (trendy word alarm!) “streamline” the Vatican machinery, in order to better manage the continuous decline of Christianity all over the West and to be faster in issuing press releases whenever a Church is desecrated by graffiti, or naked nymphomaniacs.

In order to do so, they want to… create a new layer of administration, in the form of a “coordinator” or “moderator” (no, let's say it in Latin: moderator curiae), whose job will clearly be to add a layer of busybodying into the machinery; thus, ahem, “streamlining” it.

I have already made the comparison between the Vatican machinery and General Motors in the Fifties: a rather monstrous administrative apparatus which felt no desire to “streamline” because it just did not need to. The Vatican is no different. The expenses caused by the couple of thousand priests and prelates there are but a very small exercise compared to the immense apparatus of the Church, an organisation employing around a million only of priests and religious people of both sexes, to which the vast number millions employed by affiliated organisations like Catholic charities worldwide must be added.

If we look at reality in a cynical way, we will see that there is no need for painful cuts, merely a wish that things be cheaper and better organised. Against this, we have the fallen nature of humans, the vanity, at times even the good intentions; creating one day o new office, one day a moderator, one day a new congregation (this might be about to happen, too…).

The necessity to reduce expenses is – rhetoric aside – just not there. The Church is brutally rich and she might not have been so well off – relatively speaking – since the Renaissance. She will not be put out of any “market” if she isn't very lean. To her, efficiency is a thing that looks good in theory, and very difficult in everyday life.

Look at how effortlessly even a circus article like Cardinal Dolan can gather the huge amount necessary to restore St Patrick Cathedral – or an utter disgrace like Mahony could gather more than needed for the edification of the “Taj Mahony” – and realise that the Church has at her disposal virtually unlimited means, that she must only tap when needed in order to satisfy her every material need. By all the rhetoric of poverty, Francis knows it perfectly well.

No, there is no need to streamline anything. The human vanity, though, is still there, and her needs are strong. Francis is, by all his talk, giving the example by promoting people belonging to his circle of friends, thus showing once again that vicinity to the power is better than competence or honesty – or basic decency – every day of the week.

Be one of Francis' buddies and he will put you at the head of a bank even if you are a scandalous sodomite. Be an orthodox religious order and he will crush you no matter how successful you are.

It doesn't look like a recipe for administrative efficiency and honesty to me.

Rather, say hello to the “moderator”.

“The Passion Of The Christ” 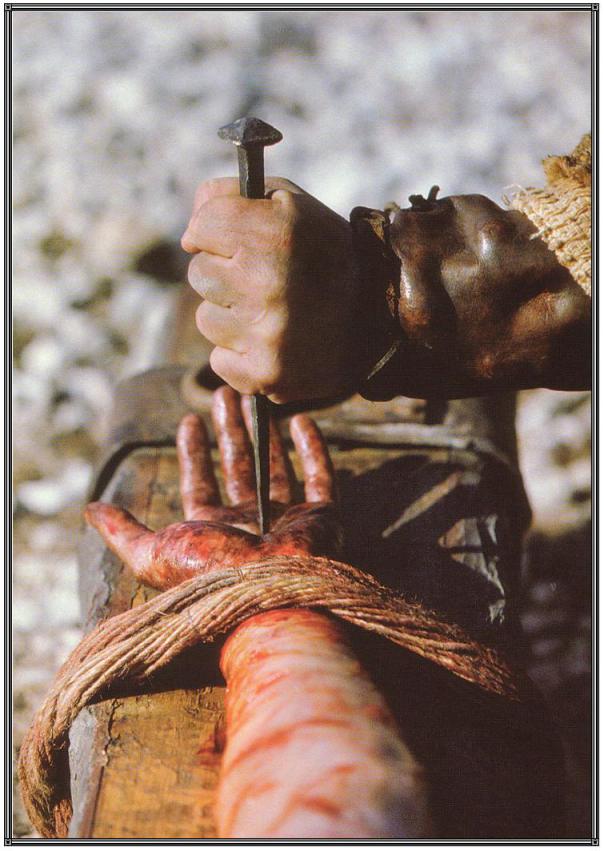 The Passion Of The Christ

The First Fag President of the once glorious United States has invited the first so-called “gay” so-called “bishop” of a so-called “church” to give the final so-called blessing at some speech or other some days ago. With the usual class, the “bishop queen” twitted “OMG!”, thinking he is a screaming, stupid, self-centred adolescent girl. Which he is not. Adolescent, I mean. Anagraphically, at least.

On reading this, I reflected on the perversion of modern times, when Christianity has become such a faint remembrance, and perversion so mainstream, that even a POTUS can get away with what Barry just did without being flayed to death.

Today, on Good Friday, we can reflect on how many, in a position of power, crucify Christvevery day not (only) with their private sins, but by openly attacking Christian morality at every level: social, legal, and religious.

And then I thought: what if Barry would, faithful to his “inclusive” creed, suddenly discover a same-sex attraction for the girlish “OMG” “bishop”? Look, Obama is enough of a spineless wimp, to the point that he has even openly admitted he doesn't smoke out of sheer fear of his wife. And then there's Michelle O.: a woman with jaws good for a Spielberg movie, and whose entire demeanour and attitude to life says she would so much have wanted to be born with a willie, but she had to find an emasculated puppet in order to become the President Of The United States By Proxy. Oh, the injustice of modern times…

What if, then, Barry were to embrace his already rather developed inner faggot, and discover a sudden same-sex attraction for the ageing wannabe bishop “OMG!” Robinson? Let's look at it.

Michelle “Jaws” Obama would have to recognise, at least in public, that even her husband – whom she certainly considers a third-class loser, first-class nuisance and utter idiot – has a “right” to his “happiness”, and it would be too late now to start defending traditional roles. The daughters are also, in fact, old enough to be “punished with a baby”, so they should not be shocked too much at something so “normal” like their father undergoing a “new phase”. That's obstacle two (and, as far as they count anything, mini-obstacles three and four) gone.

And then there is the most important obstacle: the voters. But you see, the beauty of being a POTUS at the second mandate is that you don't have to stand for an election ever again. If your name is Barry O. you can just sit and relax, polishing your image for the well-paid speeches to come. Playing more golf, if possible. Things like that. Voters are not your concern anymore. Your wife is, of course. But only if she is near enough to strike.

The voters would be, obviously, severely tested. One thinks of the Black vote, to a good extent not consisting of atheist trannies. But hey, if they plaud the POTUS when he invites the faggot bishop to bless people, why should they criticise him when the President himself practices what he preaches?

And so we are nearing the happy end: in this XXI century of ours the President of the United States could leave his wife and family and run away with an homosexual so-called cleric and the majority of the Country would have no other choice, if they have a shred of coherence left, than to look and applaud.

Then Michelle would be free to go on and have – if technology allows – her own little operation herself.