← The Rape Of The Church: Pope Francis Celebrates And Encourages Sodomy
Elliot Rodger Is A Son Of Our Times →

Watering Down The Truth 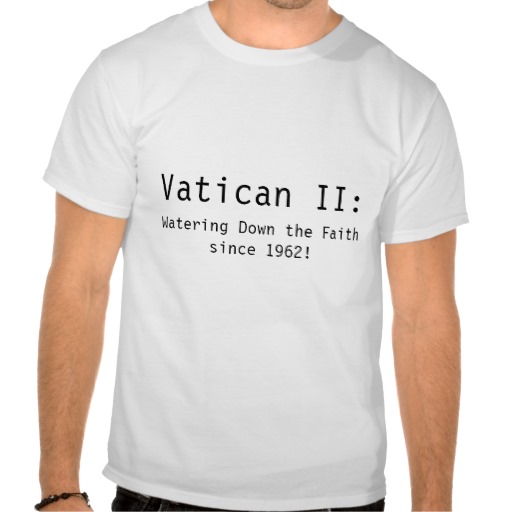 I have posted a short while ago – after my adrenaline level has stabilised, albeit to a very dangerous level – a blog post about Pope Francis’ endorsement of and encouragement to sodomy.

Reading around on the Internet, you find the various comments: with the professional blind, the closet homosexuals talking of “mercy”, and the “I don’t know how, but this must all make sense in some way” types.

Some commenters, though, seem to make a very dangerous mistake: they choose orthodoxy by half, thinking that this is a kind of “golden mean”, or a way to protect orthodoxy whilst remaining “charitable”. It isn’t orthodox, and it isn’t charitable.

A clear example is in the approval of the so-called “third way” concerning homosexuality. From what I could read around, this “third way” would consist in declaring oneself openly and proudly homosexual, whilst choosing chastity because… Christianity says so.

Thinking logically, the entire concept defies its purpose. To make something public already means to imply a search for approval; an approval that is then forcefully imposed on the community by the very assertion that there should be any “pride” in it.

One truly wonders what the purpose of this “third way” is: to lead homosexuals to accepts chastity, or to lead Christians to accepts homosexuality of something to be openly proclaimed, and to be proud of. Tellingly, no one of the promoters of this strange “way” seem to ask himself why there was never any need of it before. Was Christianity unmerciful these last 2000 years?

Beware of this kind of “moderate” positions. They aren’t Christian, at all.

Unfortunately, nowadays the very concept of scandal has disappeared. Accommodating people’s real or perceived need is the real priority, and people therefore start to think, in all seriousness and without seeing any problem, how Christianity can be bent to do it.

The idea that it should be a problem at all that a faggot living with his “partner” would not have his “relationship” with him legally regulated, or would not be able to visit him in the hospital, or would not have any right to his “pension pot” by “divorce” would have caused justified scandal, mixed with amused irony and salacious comments, in every generation before ours. Nowadays, people very seriously think about them, and think them a societal issue. This is how de-Christianised our societies have become.

These are merely two example. There are many others.

Be always vigilant, and reflect whether what you are reading on the internet would have been considered sound by your grand-grandmother.

Truth never changes. It’s as simple as that.

← The Rape Of The Church: Pope Francis Celebrates And Encourages Sodomy
Elliot Rodger Is A Son Of Our Times →