← Enjoy It While It Lasts? The Future Of Orthodox Blogging Priests
Hatchet Job On The Sly → 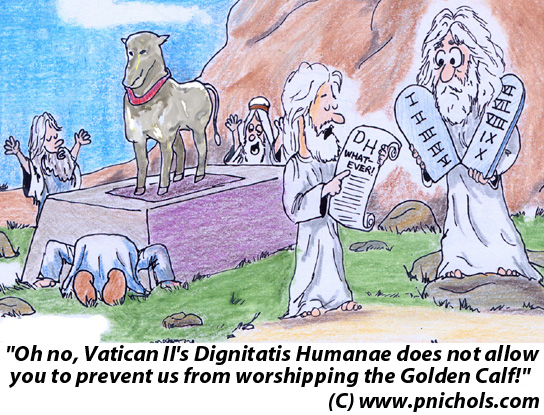 Stellar blog post from Father Ray Blake concerning the way our very image of God – with the obvious consequences in practically every aspect of life – was subtly but substantially subverted by Bugnini and his band of liturgical terrorists.

The blog post appears to have been removed, or I cannot find it anymore. Perhaps it will reappear. The main message of the post was that the careful selection of the readings in the New Missal gave a different image of Christ: not King anymore, but Buddy Boy. The blog post was truly good.

We see once again Satan’s gradual approach to war at work. Bugnini expunges the Rex Tremendae Majestatis from the experience of the common pewsitter, and substitutes it with a harmless kindergarten Christ who likes everyone and whom no one needs to fear. Given time, a Pope will invite sects from all over the world to Assisi, to take part to an orgy of blasphemous “feel good-ism” inconceivable in the past, but made possible exactly by the harmless kindergarten Jesus with which one generation has now been raised. Given more time, a much more shameless Pope will publicly – if not solemnly and officially – renounce to any requirement of Christian faith, or even to any faith at all, thus spreading a message of universal salvation that represents a new high in blasphemy.

The devil works in grades, advances in small steps. He knows there will be no lack of stupid people accepting the first step and calling “uncharitable” those who refuse to do it; after a while, exactly the same will happen with the second steps; then with the third, and the fourth. At this point, so-called same-sex marriage can’t be far away; after that, it will be outright persecution of Christians. All the while, there will be plenty of stupid people thinking they are Christians, and those who are persecuted are simply backwards homophobic reactionaries.

It must become clear to us that this corruption filters through every aspect of our life. Lex Orandi, Lex Credendi, Lex Vivendi. The kindergarten Jesus begets a kindergarten theology, which begets a truly stupid kindergarten mentality. Suddenly, the accent is not on the tabooisation of homosexuality, but on making the homosexual feel comfortable with himself. When people write comment in your box stating that people should go around saying to everyone that they are catholic homosexual like others go around saying that they are recovering alcoholics, you understand the perversion of our times has come so far, has polluted the mind of the people so brutally, that to them the concept of taboo and of sexual perversion is not different from excessive drinking. The new lex orandi has perverted the lex credendi to such an extent, that sexual perversion is now accepted part of the lex vivendi.

The same happens in many other aspects of life, but most clearly nowadays in the matter of adultery. We see here the same kind of mainstream madness that has worked so well for the pervs. If Jesus not only loves, but saves everyone unconditionally, this “greatest buddy evah” created in the mind of the people will be incompatible with any kind of sanctions, and the concept of sin – even of very grave and public scandal – will be washed away to the point that a “cruel” Church is now seen as the Oppressor and the public sinner, poor lamb, as the oppressed victim.

What is happening today – from the outright revolt of homosexualism to the more subtle madness of imagined “third ways”, and from the outright dissent concerning communion for adulterers to the satanical deception of “pastoral approach” that perverts Christ’s very message – is the logical continuation of the subversion of sound Catholicism started with V II.

This is why every attempt to justify V II blaming exclusively its after effects is completely wrong. It is like justifying the first line of cocaine, stating that the real trouble was caused only by the addiction that followed.

V II must not be reformed or revisited, or brought back to a supposed original purity.

It must be simply exterminated.

← Enjoy It While It Lasts? The Future Of Orthodox Blogging Priests
Hatchet Job On The Sly →