← Fading Away
Salvation, Not The Poor, Is At The Heart Of The Gospel’s Message. →

I have read around, inter alia from that nasty Italian blogger, Dealbabor, or something like that, about Pope Francis hiding Christ from the sight of the Jews, lest they be offended; and, thus, denying him in front of the Jews like once Peter. 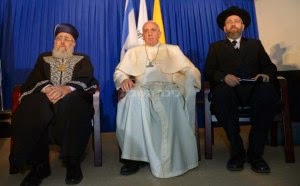 Here, the Pope tries to extract the pectoral with a supreme effort, unusual for a man of his age.

I am flabbergasted. Totally flummoxed. Still, particularly that Italian guy really lets me go into conniptions. In virtue of my role, I feel obliged to write a public answer to this nasty little Italian chap, Dealbabor, or whatever his name is.

Who is he to judge?

We all know how easy it is for a big, heavy pontifical pectoral to go and jump behind a Pope’s fascia!

We have seen it all the time. The net is, in fact, full of pictures of BXVI’s and JPII’s (let alone Pius XI’s and Pius XII’s) pectorals happily bouncing around, and hiding themselves behind some papal accoutrement with great energy and presence of spirit. Google it for yourselves. I am really full of it. I mean, the Internet is really full of it! 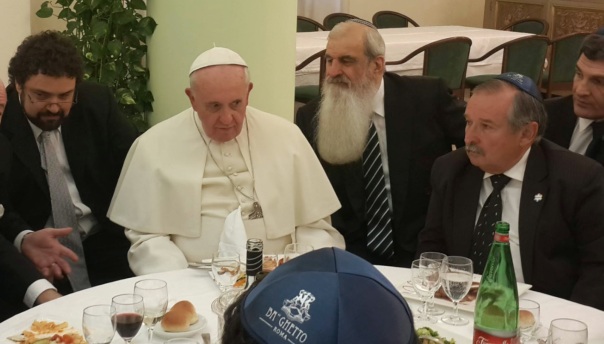 Here, the Pope tries to starve the rebel pectoral; without success.The Rabbis follow the struggle with great interest. On a patriotic note, the mineral water is Ferrarelle. Excellent Italian choice, dear Rabbis!

You see: pontifical pectorals are not like any other pectoral. They have a life of their own. They just bounce around! Like kitten playing with the knitting wool ball. Like crickets after a double espresso. Like fleas at the sight of the taxman!

And they are very shy, the pontifical pectorals are. As shy as little children. When they see these severe Rabbis, with their ugly big beards on their ugly big faces, all dressed in black, obviously they will want to hide behind papa like a little child! Wouldn’t we all? Is it so difficult to understand?

Don’t we all know, all of us, that when a pontifical pectoral cross has become unruly it is notoriously difficult to take it out of wherever it has put itself? This, of course, at times forces the poor Bishop of Rome to meet his interlocutors with his crucifix well stuck, or even completely hidden, in the recesses of his habit! It forces him, d’you understand?  It stands to reason! Sheesh!

Granted: what a pity, that this should happen just as the Pope wanted – as is, I do not need to tell you, his first duty – bring Christ to those “with the wrong faith” (“wrong”: per; “faith”: fides; “with the wrong faith”: perfidus; successively, and by extension: “treacherous”, “betraying people’s faith in him or her”).

And in fact, this Pope is well-known and universally praised for his strenuous defence of extra ecclesiam nulla salus, and for his relentless fight against the moral relativism of our times. But you know that already, so I don’t even know why I am wasting time telling you that…

Oh, how Francis always thunders against those who believe that God’s Covenant with the Jews is still valid for them, and they therefore do not need Christ being brought to them! With what energy does this enlightened Pontiff quashes the blasphemous assertions of those who believe that atheists can be saved if they die in their atheism, provided they are in good faith! Have you not noticed, pray, his zeal of conversion of his best friend, the Rabbi, to Catholicism? How could anyone – like that nasty little Italian blogger, Dealbabor, or something like that – think that Francis’ sudden de-Christified appearance in front of all the Rabbis might have been anything else than… the product of a stubborn pectoral cross, jumping up and down and understandably afraid of very ugly beards on the face of very ugly men? 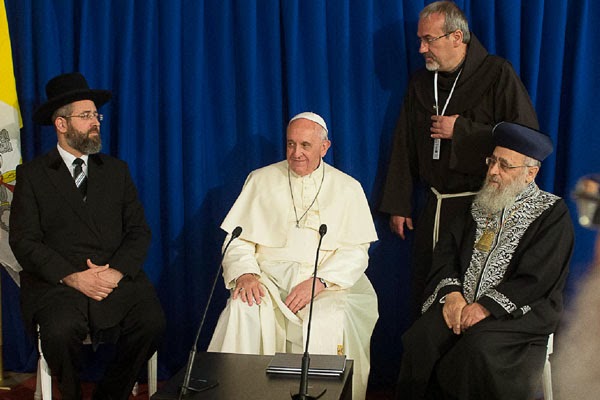 The Rabbi on our left looks with suspicion at the friar: “hhmm, Francis is always very kosher, but what is he covering with the hand? A pass? Or a… cross?”

Look: I have once seen a dissenting nun myself: I was also afraid at the sight of her beard! It happens to the best of us!

Seriously. This is so… so… so… uncharitable!

That Christ should be offended, who said so very clearly Jews do not need to be converted?! Only the others! I mean, it would be better if they did, wouldn’t it? Do you remember?

Oh! Sorry everyone!  Must dash now.

There are pontifical pectoral crosses jumping around everywhere here.

Keeping them in their place is such a stressful job.

Was nice to write to you anyway, Mr Editor.

← Fading Away
Salvation, Not The Poor, Is At The Heart Of The Gospel’s Message. →