← When Sally Killed Sally
The Baptist In The Time Of Mercy →

With Stalin, In Favour Of The End Of Stalinism. 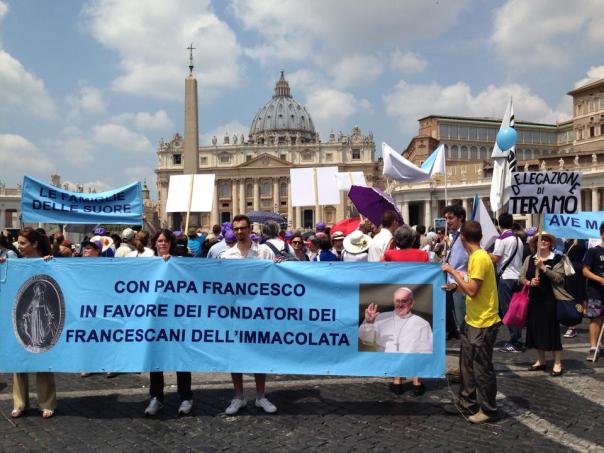 Read here the link to a manifestation organised by the laity that was gravitating around the FFI in favour of the latter, asking for the end of the persecution.

The banner reads: “With Pope Francis in favour of the Founders of the Franciscan Friars of the Immaculate”

I might not be the only one who sees a problem here.

The initiative is good, mind. But unless things are called with their own name I very much doubt anything will ever change.

To pretend that Pope Francis is extraneous to the persecution – rather than the one who ordered it  – is a way to keep him out of the line of fire.

As long as Francis is out of the line of fire, he will continue to do what he is doing, happy with all the blame being apportioned to Father Volpi.

I personally think the situation should be expressed with a lot more energy. You would not expect the banner to read “Against Francis, in favour of sanity”, but it could certainly have been “We implore Pope Francis to put an end to the persecution of the Franciscan Friars of the Immaculate”, or the like. Banners, I mean, which make clear in a polite way that he is the one behind the persecution, and refuse to keep him out of the responsibility for what is happening.

I understand the objection: if they criticise the Unholy Father, the Volpis of the world will say: “see? we told you so!” But as I have written already in the past, when the time of confrontation comes it makes no sense to shun it in order to avoid the accusation of being confrontational. Let the confrontation come, say I, and let the Unholy Father pay the price of his insolence at least in terms of popularity and approval, which he seems to love above all else.

Francis is not the solution. He is the problem.

← When Sally Killed Sally
The Baptist In The Time Of Mercy →
Loading Comments...