Masaniello, The Pope, And The Devil 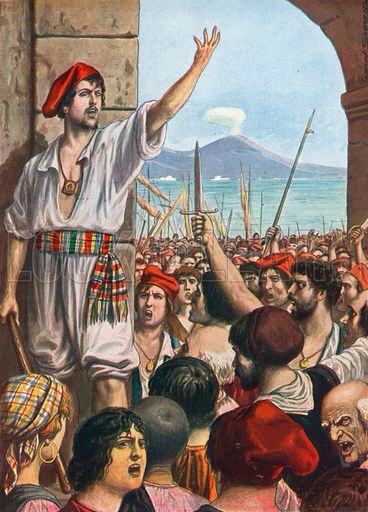 Today he would have good chances as a priest: Masaniello.

I would like to write two lines about the ways I see this man, Jorge Bergoglio, disgracefully elected to guide the Bride of Christ.

The amount of heretical statements, the arrogance, the persecution of a good Catholic order, the enmity with all kind of devout Catholicism, the continuous propaganda against Catholicism, the commingling with perverts and the assorted scandals persuade any sensible thinking Catholic that this is not a decent person, and not worthy of the habit. A good man, he ain't.

There remain, then, only three possibilities:

2. An evil man, willingly siding with the devil.

Hypothesis 1 seems untenable to me. Whilst it can happen that a perfect idiot makes a brilliant career (former Italian President Pertini comes to mind; a man who in his shameless and senseless populism had many traits in common with Francis, and a whining socialist with an extremely comfortable life like him), I would say that this generally happens when a useful idiot is required. Pertini fulfilled his role beautifully, being a former partisan without the embarrassment of a functioning brain, and being thus apt to be used as “symbolic” but harmless figure. But I doubt this was the case for Bergoglio, because barring extreme luck you don't get at the head of a seminary, and then bishop and archbishop and Cardinal, without being an expert in moving along the corridors of Church powers; not unless you are, perhaps, a very saintly man, which in this case does clearly not apply.

Hypothesis 2 also seems, to me, not very realistic. The way I see things, a truly evil man would go at his work in a smarter way. He would, in other words, be very attentive to present a credible facade, and to make it difficult to see the self-serving and the deception. He would do so, because he knew he has a mission, to which he must sacrifice short-term advantage. I cannot imagine any evil, but thinking man behaving in any other way.

I tend strongly for hypothesis 3, because I see the very careless way with which Bergoglio proceeds in his work of destruction; the perfect lack of interest today for what he has said yesterday; the senseless way in which he embarrasses the Vatican PR machine, forced to expose his own childishness and mediocrity for all who have eyes to see; his ability to say everything and its contrary according to whom he has in front of him; his utter defiance of everything that stays in the way of his own self-aggrandisement, from liturgical rules to sexual moral.

Francis is like a child never able to resist the cake offered to him, even if he knows there will be stomach ache to pay for that. As long as he gets a constant supply of cake and the stomach ache is manageable, he will be fine.

But again, in doing so he reveals his game, and alienates a number of people big enough to, so much is clear, utterly stain his own pontificate after him. The number of people who do not swallow the lie of the humble pope is already far too big to call the policy authentically successful. An evil Pope would be desperate at the ridicule, and would do his outmost to win or confuse the prize souls, the true believers. This one is content with the mediocre: the homosexuals, the adulterers, the infidels, the conformists, and the outright stupid.

For a willingly evil Pope, this one is an outright disaster. But for one who has lost the faith and only thinks in terms of masses applauding him, the strategy is the right one.

Someone might, at this point, make an exercise in reverse thinking: “But you see, Mundabor: Bergoglio's evil genius is proved by his cunning plan to appear a self-absorbed simpleton!”

Hhhmmm. I don't think it works. No evil genius ever consistently behaved like an idiot, though an evil genius may have an interest in looking weak or inoffensive as long as he is not in power. But this one can do pretty much as he pleases, and he can't manage to fool anyone with an alert brain.

Also please think of this: an evil man would go at his work of destruction slowly, carefully, methodically; avoiding the obvious conflict with Catholicism as he slowly gnaws at it; confusing the most alert minds with a very careful steering of the Barque towards rocks very far in the distance whilst he gives numerous and solid examples of true orthodoxy. He would not, methink, behave like a drunken sailor all the time, and happily relying on the mediocrity or stupidity of his own sailors.

This Pope is too bad, too obvious, too self-absorbed, too vulgar, even too stupid to be given the rank of evil genius faking mediocrity. What you see is what you have: a man who sought in the habit a life of economic security in a respected profession, deprived of any class or manners or intellectual refinement; whose theological education can only be described as a joke; and who cannot express a deep thought to save his life, heck, cannot even say three phrases in a row that truly make sense. A deeply boorish, arrogant man, who has discovered that a show of “humility” dupes enough idiots to serve him well in life, and has followed this line of conduct for many decades now. A man whose only love and interest in life is himself, and therefore finds it entirely natural to, say, board a bus or be driven in a Ford Focus, if this promises the much greater personal satisfaction of self-aggrandisement.

Think of him in this way, and you have a photograph of his man that is, in my view, very accurate. This is consistent with the off-the-cuff rubbish he finds so difficult to avoid, the continuous contradictions, the constant desire to please, the utter lack of care for what even his press secretary thinks of him, the utter disinterest for Truth, the defiance of scandal, the doubling of the scandal whenever this promises a clapping audience, the apparent sacrifices – one entire summer in Rome occupying an entire floor of a hotel! The humbleness of that! -, the anti-Catholic rubbish like the offence to the Blessed Virgin, told to the masses just because it sounded good on the day, and all the rest.

The brutal truth is, if you ask me, that a kind of less gifted Cola Di Rienzo, or – far better said – a kind of better educated and better situated Masaniello was made Pope; but a Pope can't be disposed of as easily as the other two. A Pope will stay there and afflict us for as long as the Lord, in His wisdom, decides that we should be punished. Pray God that no further Masaniellos follow this one.

We are talking of evil geniuses here. At times, someone from the mob, with some cunning ability to sniff the wind and to move among deciders, and with a good nose for what people want to hear, can reach positions of preeminence.

Bergoglio is, clearly, ecclesiastical mob. Pope Masaniello, if you like. A boor in white.

But authentically, willfully, evil? A man planning the destruction of the Church, and seeing in it the aim of his Papacy? I don't think so. 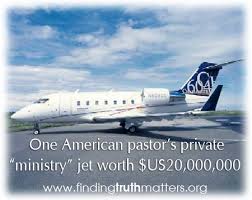 Flying out to the outskirts: Copeland’s jet.

Eugenio Scalfari asks Francis if he wants to convert him. Francis answers “Proselytism is solemn nonsense”. The Pollyannas run to explain to us that Proselytism doesn’t mean Proselytism, it means being a nasty guy.

Wannabe Anglican Bishop asks Francis, probably after one grappa too much, to make a video for his Proddie confreres at the great Proddie convention. Francis readily complies. Not one word seeking conversion to the Only Church ( = Proselytism). A lot of fluffy “I am OK, you are OK” instead. The Pollyannas run to explain to us this is all part of a cunning plan, by which you are nice to people, and the Holy Ghost converts them: no unpleasant words necessary.

Francis then proceeds to receive a couple of extremely un-Franciscan Proddie grandees: among them, the ever-smiling Joel Osteen, privately called “this is my Bible”, and…

Comments Off on Pope Solemn Nonsense