Heresy In The Cemetery 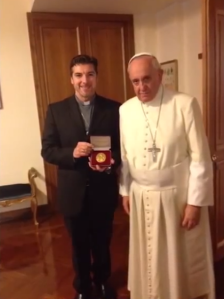 Everything for the buddies…

Stellar article from John Vennari, that I got from Angelqueen. It is long, but well worth your time.

The alleged fact is described in this way:

“Father David told us that because Tony [Palmer] was not a Roman Catholic he had to ask his bishop’s permission to celebrate the requiem and though Tony’s wife and children are Roman Catholics, permission still had to be given for the requiem. The bishop agreed but said that Tony could not be buried as a bishop as he was not a Roman Catholic bishop. However, Pope Francis said he should and could be buried as a bishop, and so that put an end to that little bit of ecclesiastical nonsense

I do not know whether this is true, and I think the Vatican should make a statement on this. I suspect there is more to it, because I cannot believe Francis is as stupid as the man reports. Albeit… one wonders. If Francis has made himself culpable of such a heretical behaviour for the sake of his buddy, this truly tells you everything you need to know about his worth as a Pope. It would also mean that when he said “brother bishop” he really meant it. Heresy pure and simple.

The article goes on to discuss the particular view of the likes of Francis and the late non-bishop Palmer concerning “unity”. The operative word here is “convergence”. Convergence is, mind, not conversion. Every talk of “convergence” implies that there’s something wrong in the Church qua Church, and a new “something” will one day be created that is a fusion of Catholicism and Protestantism. To talk, or even think, in this way is to deny Christ’s Church, full stop.

No one has, in this perspective, to “convert” to anything, but rather they march in joyous heretical concord toward the creation of some vague and undetermined new entity; which, whatever it is, cannot be the Church of which Francis has said that he believes everything she believes and professes everything she professes.  Quoting Vennari again: “Or as Francis says, “no one is coming home,” but we “meet in the middle” “.

The new ecumenism that emanated from Vatican II, and that is fostered by Pope Francis, is a head-on-collision with the Catholic doctrine and practice of the past. [7] The Catholic Faith is not the personal plaything of the Pope that he can remold at will to accommodate the ecumenical spirit born of Protestantism. He is bound to teach the consistent doctrine of the centuries without change. To do otherwise is to be unfaithful, irresponsible and unpastoral.

I would add: heretical. I have written often on this blog that Francis works against Catholicism. He works against Catholicism because his mindframe is hostile to Catholicism. I am actually persuaded that he hates it, which is why he spends as much time as he can among Proddies and Heathens, disparages the Vatican as a place rich in leprosy, and freely insults all those who, with their pious behaviour and solid Catholic faith, remind him of Her Truth and Her beauty.

Please follow the link and enjoy the rest of this excellent article. It is consoling to know that the current madness meets such well-argued and articulated resistance.

I am asked (not directly; but together with the other readers) the following questions:

1. If I have a basic trust in the Holy Spirit working through the Body of Christ, the Church.

2. If I have a rock-solid belief that that the Pope is working for the best of the church and the promulgation of the Catholic faith, and

3. if I can listen to him and obey as my shepherd and the Vicar of Christ.

As such questions are another symptom of the diabolical confusion nowadays being pushed  everywhere, I thought I’d give my answers:

Yes. I have a basic trust. In the end, the Holy Ghost will not allow the Church to be destroyed, and He will drive Her back to sanity. But seriously, that’s it, and the assurance is no more than that.

I do, obviously, not believe that the Holy Ghost endorses every madness happening within the Church. If I had thought that way, I would have supported the Arians when Pope Liberius of Pope Honorius supported them, and I would have believed that there is no Particular Judgment before the Universal Judgment because Pope John XXII (evidently, in this logic, hand-picked by the Holy Ghost and therefore wanting the heresy) was fully persuaded of it until, apparently, the day before he died.

You got to be joking. I have a rock-solid belief that this Pope is working for the best of himself, and the promulgation of the faith in Francis The Black-Shoed Bus-Travelling Social Justice Hero. Again, the Holy Ghost never promised us we would not have a nincompoop. Actually, there is much reason to believe He would punish us with one. As long as we refuse to understand this simple fact, we will deserve further punishment.

I listen to him, and I am mostly horrified. As to the obedience, it will not stretch to the point where the Pope conflicts with Truth. Actually, with the actual red-nosed clown the confusion is such that I cannot obey to both, him and Christ. Therefore, I choose Christ.

As Francis’ disgraceful pontificate goes on, my admiration for St. Paul grows by leaps and bounds. He had the guts to publicly rebuke Peter when he was straying, and he did so with the man whom Jesus Himself had appointed, and he himself (Paul) not even one of the original Twelve. One notices a certain difference with today’s Cardinals and Bishops.

No Paul in sight, then. But this does not mean that a Pope is due obedience simply qua Pope.  He is not an oriental Satrap, and Papolatry has no place among us.

Some Words About Blog Moderation

Go away. You are not welcome.

As the disgraceful Francis throws away the mask and shows the true Jesuit behind it, it is perhaps fitting to say a couple of words about the way the highly emotional, rather short-tempered author of this blog will cope with the challenges of our time.

1. This is no place for Sedevacantists. Whilst we criticise the advanced state of decay in which the Church finds Herself, we are fully loyal to the Church.

One does not apply for a new passport – or, more fittingly put, denies the legitimacy of those issuing the passport – because one despises the bunch currently in charge. Particularly if it is Christ’s passport, and the passport to Purgatory. Every comment even vaguely reeking of Sedevacantism will be culled, because I do not want my blog to be occasion of scandal to the many good Catholics reading this effort…

Comments Off on Some Words About Blog Moderation