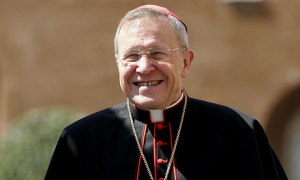 ZENIT: But are African participants listened to in this regard?

Cardinal Kasper: No, the majority of them [who hold these views won’t speak about them].

ZENIT: They’re not listened to?

Cardinal Kasper: In Africa of course [their views are listened to], where it’s a taboo.

ZENIT: What has changed for you, regarding the methodology of this synod?

Cardinal Kasper: I think in the end there must be a general line in the Church, general criteria, but then the questions of Africa we cannot solve. There must be space also for the local bishops’ conferences to solve their problems but I’d say with Africa it’s impossible [for us to solve]. But they should not tell us too much what we have to do.

1. We do not listen to those people.

2. They are so uncivilised, that among them homosexuality is taboo.

3. They have their own problems defending marriage, but why should we care: we don’t give a fag for marriage anyway.

4. Who are these people, thinking they can tell us what Christianity is. We do our thing ourselves here.

5. (It’s easy for them. They do not have to be afraid for the Kirchensteuer revenues).

The richest Catholic country in revenue (per nose) criticises the Continent in which Christianity is, with all the problems that never fail to appear, most vibrant, growing, orthodox. A fact even more notable if we note the deficiencies in term of liturgy.

By the by, Africa is a Continent in which Christianity was already well-spread, giving us great saints and many Popes, when the Germans had not even heard of Christianity. People like St Augustine and St Athanasius would be unable to recognise Kasper as a Christian, let alone Bishop.

Apparently, many Germans, and Kasper with them, have reverted now to the point their ancestors were then.

Africa needs to give a good example to Christianise Germany.

Comments Off on Vintage Mundabor: Keep The Customer Satisfied

Comments Off on Reblog: Vincent “Quisling” Nichols At Work

God Bless Rorate Caeli, and their indefatigable work for the Faith. One of the contributors whose work is so important, if perhaps undervalued, is Francesca Romana, who has given us countless excellent translations of Italian texts. Translations, in fact, so good, that they are then repeated and quoted in blogs and newspaper articles all over the Catholic world. Yours truly can, of course, understand Italian, but the task of translating all those big texts is a very daunting, time-consuming one (how do you translate “taroccato?” Ah, the beauty of the language, and the airiness of Italian irony… ).

Therefore, whenever an interesting articles comes up in the Italian Press, yours truly hopes that Francesca Romana will come to the rescue of the English-writing blogger. Which, very often, happens faster than you can say ” If laws do not lead people to Christ then they are obsolete”.

Today, Francesca Romana delivered another pearl: the translation of a stunning article from Professor Roberto de Mattei. The article is, basically, the carpet bombing of the Relatio. Nothing is left untouched. At the end of the treatment, what remains are smoking ruins, a testament to the shameless arrogance of the heresy spread by this Pope.

Pope who is, by the by, called into question openly, with the invitation to the Bishop and Cardinal to deny obedience to him.

I invite you to visit the site and read the entire article for yourself. A breath of fresh air after the stench of these days. Published, like other similar intervention, on a mainstream newspaper.

Francis launched two boomerangs on Monday: the Relatio and the “I am better than God”-homily, clearly an open endorsement of the revolutionary paper vomited by Archbishop “Faggot” Forte and Cardinal “Coward” Erdo.

The boomerangs came both back, hitting him very hard on the nose.

Let’s hope the bleeding will be copious.