To Hell With Halloween

One of the most disquieting demonstrations of the stupidity of our times is the explosion of “Halloween” as a party occasion in Europe.

It is obvious to every thinking mind that this development was fuelled by the party industry – pubs, restaurants, everyone who sells alcohol – in order to increase sales. This is how what used to be a rather American, rather limited to children and young people, and rather stupid phenomenon has become, in a decade or two, a big drinking feast for people of all ages, and no brains. Children saying “treat or tricks” are, evidently, not profitable enough, but the big booze is. And if you live in the United Kingdom, you will immediately realise that an awful lot of people are desperately looking for an occasion, or a social excuse, to get drunk once more. The pub owners know it very well.

It is perfectly useless, as things stand, to try to rivendicate an Irish origin for Halloween; or, even worse, to try to claim a Catholic origin for it (“All Hallows' Eve”).

The reality on the ground is that the Halloween you get now in Europe is an American import, the true US version full of stupidity, alcohol, and paganism; basically, an excuse to end up vomiting on the sidewalk at 1am, and a factory of lewdness, fornication, and unwanted pregnancies. Halloween is another glaring example of the stupidity of our times, in which people “believe” in a lot of stupid, childish dreams (“the end of poverty”, “world peace”, and the like), but do not believe in a very real problem that regards everyone of us: the existence of hell.

I therefore hope, as I write this (publication scheduled for late evening) that I will not have to read any sissified Catholic blogger in Patheos style, “embracing” Halloween as he explains to us how Catholic it actually is. It may well be true that the remote origin of Halloween is, if you dig deep enough, Catholic. But this does not mean that we can, therefore, “welcome” and “include” Halloween as it is! This would be nothing more than another instance of Catholic pussycat attitude, siding with the world whilst telling all of us that everything is, once again, fine for us to approve, and be a part of.

When sanity has come back to these drunken islands, and proper Catholic festivities are properly observed by properly instructed Catholics, then we will be able to be more relaxed about it.

As it is now, it is just Halloween: a pagan exercise full of superstition and drunkenness, and therefore embraced by the world. An exercise which lets an army of people enter the great Feat of All Saints as they vomit on the pavement, in what is – do I need to say it? – undoubtedly grave matter.

Screw Halloween. Boycott it and have other people boycott it. Tell your colleagues and friends you don't do Paganism, much less drunken Paganism.

Celebrate (in the proper way) All Saints instead.

Some Thoughts On Evolution

The recent words of the Unholy Father concerning Evolution would, perhaps, justify some words. The problem with that is that the topic is absolutely vast, and not apt for a blog post. I will, therefore, limit myself to expressing some of my thoughts on the matter.

“Evolution” is used in many and confusing ways. I mention today three which, in my experience, are the most commonly found:

1. The idea that species evolve.

Today’s cat is different from the cat of many years ago. Japanese are, on average, 20 cm or more taller now than they were before WW II. The smartphone evolves into, say, the Sony Z3. The Porsche 911 evolves in the “991” iteration currently on sale. An awful lot “evolves” in life, and it is clear that this is in God’s plan. The human body himself evolves from a tiny and defenceless being into a strong being able to give and protect life, etc. This isn’t rocket science, and is nothing unorthodox.  In my experience, most people who say they “believe in evolution” think of this. Asked whether they really believe that a dog evolved from a monocellular organism, they would stop and pause.

2. The theory of evolution.

This is the idea that, for some reason unknown to me, from something that is not there something should suddenly be there. Out of the simple genetical structure of the amoeba, a more complicated structure would, one day, have been born. Just so. How from nothing something can be born was never clear to me. It defies a rational, scientifical explanation. It is, in fact, unproven (which is why, 150 years after Darwin, we are still talking of  “theory”). It is the idea that from nothing something is born. If cars were able to reproduce, it would be like saying that a Toyota Prius, one day, begets a Ferrari, the Ferrari a jet fighter, and the jet fighter an aircraft carrier. How can it be that out of a Prius comes a Ferrari? “Evolution”.

The logical absurdities of this are, in my book, many. Why are dogs still unable to drive a motorbike? Why have mice not evolved microweapons against cats? Why are some insect-like animals able to evolve into dogs, or apes, but the world is still full of insects that keep going into the spider’s net? Where are all the intermediate species between the dog and the very simple animal that would be his pro-pro-pro-progenitor? How could this simple progenitor create something from nothing, which is: a more complex genetic code out of thin air?

I don’t buy the theory of evolution. I am just not sold. But I would not accuse of heresy someone who would defend this strange theory, if he manages – as it is certainly possible – to make it someway compatible with Scripture.

Here I must open an aside: don’t be a Protestant (those who scream loudest about the Scripture generally come from there) and read attentively Humani Generis and Providentissimus Deus. You will find here the proper hermeneutic expressed out of many examples, and with brilliant quotations from St. Augustine.

Say, for example, that a Catholic would see in God’s Divine Intervention the progressive enrichment of the genetic code from that of the very simple animal to the dog; that would, certainly, be worthy of consideration as an exercise meant to make the theory compatible with Catholicism, as only Protestants tend to fall in the error and heresy of Literalism. Only, at that point it would not be a theory of evolution anymore; merely an explanation of the Genesis in light of the fact that God spoke, in those times, to less enlightened people in a language they could understand. Which is, before you scream, what the Church has always believed, and if you disagree the priest who cared for your conversion could have done a better job.

God’s scripture has only Truth in it. It has, because Scripture is Divinely inspired, which means that in the Scriptures that and only that went in, which God wanted to get in. Which does not mean that God would – much less: should, in order to please the Literalists – explain to simple people the immense complication of His cosmos in the Book of Genesis. The Divine Revelation is presented in the way God wanted it to be presented, and God wanted it so presented so that the Truth may be understood. Scripture is, though, still Divine, and True in its entirely. It merely is not a scientific treatise.

How can you know, then, what is what? How can you know what of the words of the Bible is divinely revealed Truth, and what is a way used by God to let your average, not-so-terribly-smart Jew get it? The Church tells you.

The Church, as the custodian of the Truth in the Scripture, will tell you in which way this or that passage must be read; and when in the exegesis a “progress” should be made, it would never be in contradiction of what was said before. It would be, rather… an evolution. Again, refer especially to Providentissimus Deus for the methods used, and learn that apparent conflicts between science and faith are not new to our age, but were very well known to the theologians of old and to the Church Fathers.

Darwinism is not a scientific theory, but a philosophic position. It has been, since the XIX Century, the atheists’ Creed. It maintains that everything evolved from (ever) lower species, with no exceptions, and no God involved. Men are glorified apes, and all species are evolved from extremely primitive organisms. It is in the atheist’s view a great pity, and a merely provisional stand of things, that in 150 years and an immense amount of excavations no freaking shred of evidence has been found to prove this very extraordinary claim, and I often suspect the only ape-likes humans are the ones who believe in this outlandish idea. Similarly,the atheist believes there was never a point where God created man by giving it an immortal soul (which is what distinguishes a human from every other animal; for a Christian an hypothetically “evolved” ape, similar in all to a man but without a soul, would still be an ape), and obviously there was, for the atheist, no common descending from Adam and Eve.

This is utter blasphemy, because all these credences go against Divine Revelation. Darwinism cannot be accepted without refusing Truths of Catholicism. If you’re Catholic you reject Darwinism.

This is a panorama to the best of my knowledge. I will stand corrected and gladly modify it or rephrase it more accurately as the argument against it is taken from Church tradition and past encyclical. But do not come to me bashing a Bible, because you are not a Protestant anymore. You are a Catholic now. You must see Scripture in light of what the Church tells you, not of what you learned years ago at Sunday School.

Elton John, the pathetic freak show, has just stated that Francis is “his hero”; seasoning his stupid utterances with the usual bollocks about his own perverted concept of “love”. It is clear here that the pathetic freak show is referring to Francis' failed attempt to pervert Catholicism toward sexual perversion.

This will make headlines worldwide.

I wonder how many Pollyannas will start to open their big blue eyes after this. A man who is everything the Church considers scandalous and abominable praises a Pope for trying to bring the Church on his side. If this does not open Pollyanna's big eyes, what ever will?

Open your big blue eyes, Pollyanna. This is a papacy fit for atheists and perverts. By continuing in your increasingly more stubborn blindness, you are endangering your soul.

When Popes Taught To Pray 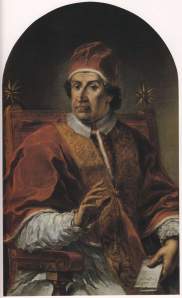 Find below the “Prayer for all things necessary to salvation”, a prayer attributed to Pope Clement XI and released in the Year 1721.

There is longer version, with the part starting with “All that I have asked for myself”. I have not posted it here, because I do not think the added part is original. Please show me the right link if I am wrong.

Note how Pope Clemens takes care to guide the faithful, through a long-winded prayer, along a rather complete path to salvation. All with set words, to be recited without variation time after time.

“Spontaneous” prayer was, evidently, not a favourite of this Pope, as he would otherwise not have bothered with such a long exercise. On the contrary, it is clear the late Pontiff wanted to give a prayerful “path” to the faithful on which they could meditate regularly, and that they…

The NSA And The Pope

Comments Off on The NSA And The Pope