Cardinal Dolan Eats His Own Churches 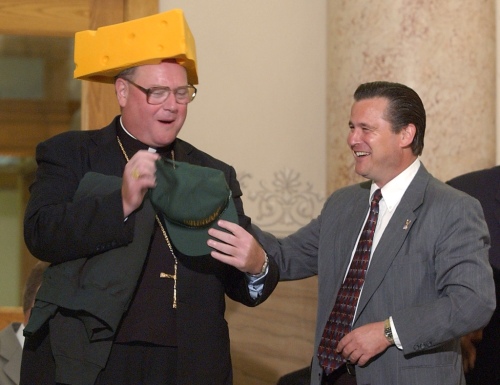 Experts were trying to understand why mass attendance was down...

The failing Archdiocese of New York has announced a slimming down plan. Do not believe the pathetic excuses filtered to the friendly press, hungry for the Cardinal's approval, and trying to let you believe demographic changes – people moving upstate; offices replacing residential buildings – are to blame.

The brutal reality is that Mass attendance is at 12%.

Now let us see, what does the Cardinal to encourage Mass attendance and a healthy Catholic life in his diocese? He makes an ass of himself whenever he can, has “no sense of judgment” for openly homosexual athletes (“good for him!”, says the popularity-hungry Cardinal) and in general undermines Catholicism at every step. As is the case for Francis and countless others, he pays his superficial popularity with the slow self-destruction of his Archdiocese. He wants to have his cake and eat it, but it does not work that way. Still, the decline of his diocese does not have to damage him personally. I know one who oversaw a decade-long decline in his Archdiocese, and became Pope.

The Cardinal's appetite for popularity and easy slogans is so big, that it is no surprise his Archdiocese is slowly aiming at self-destruction. What used to be a region full of Catholics of Italian and Irish descent adequately formed in the faith is now an agglomeration of dwindling communities, slowly and gradually eaten up by the Archbishop as he continues to enjoy the limelight.

In all this, there is one good news: the ventilated closure of the Holy Innocent church, home to the only TLM in Mahattan, will not happen. Evidently, the Cardinal wasn't hungry for further controversies with a small, but very vocal Traditionalist community. They proved not easy to swallow. Then, there would have been the little matter to digest the closure of a thriving church. For once, it appears the Cardinal has bitten more than he could chew.

It is very easy to predict that as long as Circus Welcome is in town, Mass attendance will continue to decline and churches will continue to be eaten up by “no sense of judgment” Cardinal Kong. One only has to hope that the axe will fall predominantly of those “welcoming” communities of the “welcoming” type; communities now reaping what they sow, and who will abundantly deserve the longer way to a new and hopefully more Catholic church.

Bon appetit, Your Grace. I hope you feel sated for the time being. 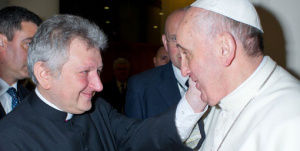 Believe me, none of these two has forgotten what sodomy is.

So, has the Pope not, perhaps, a couple of screws loose? Thus asks the one or other blog, obviously confronted with the barely believable amount of excrements the above mentioned, humble bishop keeps regaling us with.

My answer is: no. Not a chance.

For a long time I have wondered myself whether a great thickness of papal skull would not, perchance, help to understand what is happening. But more and more months of coherent, obviously planned subversive action made clear to me that TMAHICH is following a plan; a plan that in common day parlance we may call “mad”, certainly; but not in the proper, literal, medical sense of the word.

You can trace pretty much every senseless act of the Pope back to the Archbishop of Buenos Aires; the liturgical destruction (Pinocchio Mass; Tango Mass); the ecu-maniacal madness (the Hanukkah ceremonies; this book co-authored by the Buddy Infidel); the contempt for the Sacraments (sending his priests to give communion to concubines); the socialist and populist stance; the ostentation of poverty and humility; the very strong hate for orthodox and pious Catholics, even the habit of off-the-cuff homilies! Everything the Pope does is the continuation of what the Archbishop did.

We do not have, here, a good man who is “losing it”. Good men do not become so systematically evil when they start losing a couple of cylinders. What wechave here is an evil Archbishop who is made Pope. Twenty months of Pontificate shout it from the roofs. Let’s stop being willingly deaf.

Even the ferocious persecution of the FFI, coupled with a strange meakness concerning the SSPX, can be easily explained with his time in Buenos Aires. There, Francis rapidly understood that the SSPX is more than he can chew – Pope, or no Pope – but apparently the FFI started celebrating the Traditional Latin Mass only metres outside of the boundaries of his archdiocese. If you do not think Francis is petty and vindictive enough to put an entire order under his damn heel just because of that – which obviously adds to the hate he has for good Catholics anyway – then I suggest you start looking at this man’s character with some more attention.

No, Bergoglio’s brains are in order.

His will and soul side with the enemy, is all.

The Church seen from Francis’ Point of View.

Please tell me, anyone, whether any of our past Christian generations would have considered a Pope like this one anything else than pure evil.

Please tell me, anyone, whether any one of you, of this generation, would have considered a Pope like this anything else than pure evil up to, and including, the evening of the 13 March 2013.

Please tell me, anyone, whether any person put in front of the, say, thirty most scandalous statements of our Pope without knowing the author would recognise him as a Christian, much less a Catholic, much less the Pope.

It is time to make some Lio. This individual must be buried in ridicule from every blog run by decent lay Catholics.

The scandal is unprecedented. Satan’s provocation open, and daily.

Ridicule, not polite disagreement, will destroy Francis. He does not care a fig for your polite disagreement; but he does care for popularity and an untouched public image; and he knows that ridicule will doom his reputation, and make his pontificate the butt of jokes.

Don’t be coy. Don’t pussyfoot around.

We never had a Pope like this. We must react in a way commensurate to the menace.