Fun To The Death

I have read a couple of times lately of people who, upon being informed that they have an incurable illness, decide that the thing to do is to “have fun whilst they can”. Some days ago I happened to read, on one of those horrible trashy newspapers they give away for free, of a young woman who mobilised an army of girlfriend to go and “have fun” just after being diagnose with an incurable, deadly disease. Some of her girlfriends risked losing their job for that. But hey, we must all have fun together now: how can we say “no”?

I wonder at what level of stupidity and superficiality we have come to.

No amount of “fun” can take away the knowledge that one is rapidly dying. Not even in the most drunken state will such an information be forgotten; and if it would, then the remembering would be another shock. The shallowness and self-centredness of using one’s last months to drink oneself to stupidity, or to do whatever one thinks may help him not to think, is staggering. Whatever one’s idea of the afterlife, to measure one’s life by the amount of “fun” one had is the true mark of the stupid. This, and knowing that friends of yours have lost their jobs in order to go to party with you.

One may be atheist, of course. But then even an atheist with some brain, when introduced to his exit door, will certainly realise it is now or never, and will likely start having more mature reflections than “I have to have as much fun as I can now, because there’s not much time left”.

One might have problems in finding, and at times intelligent people – though, no doubt, with a great dose of culpability themselves – have; but that there should be no serious searching, and an obsessing with stupid behaviour to the end, this is truly a sign of the times.

One may, also, have the desire to do this or that before he dies; but even this seems much different to me than the deification of “fun” we see around us.

What will those girlfriends do, then? Crack jokes all the way to the hospital? Call the entertainer in the clinic room? Sing to her “for she is a jolly good fellow” as she is dying? Organise a party to “celebrate the life” of such a wonderfully profound being over her fresh grave? If one – and his friends – refuses to open his eyes and see reality from a proper perspective even in front of death, what will make him do so?

Whenever one takes such a decision, many others – I have read this elsewhere, concerning another episode – congratulate her on Facebook for her bravery. Everyone is so supportive. If anyone were to say, “I’d rather say this is the time for prayer, for meaningful reading, and to prepare oneself for a good death”, how would he or she be treated? How does he or she dare to be so insensitive? And what about denying the poor gal that little bit of fun?

A man without God, but with brains, would use the devastating news of his rapidly approaching demise to make use of his brain. But this is not the case for the lobotomised generation of our time, with more and more people determined to go into their graves without ever using that very precious gift of thinking. They will drink themselves stupid instead, or do all sorts of silly, or worse, things to remove as long as they can, at least at a superficial level, the newly acquired notion that death, which they have always ignored, will now not be ignored anymore, and has a way to let one know very well.

I have written many times, and repeat today, that to be informed beforehead of one’s death is a great blessing. A blessing even for the most hardened of atheists. A last shot at redemption, but a huge one, and one that truly cannot be effectively ignored. It will be with us every minute of every day, calling us to repentance. Let the saintly people, who can do so with reasonable safety, wish for an instantaneous death. I for myself wish salvation first, and if a deadly disease is the way how I can avoid a hell that I would otherwise have merited then please, Lord: not one, but one thousand times.

Death announced is, no doubt, the biggest wake-up call. But all this is useless, if the only thought upon being informed of one’s death is: I must have as much fun as I can, now. It truly is wasting the very last occasion, a godless death after a godless life. It is refusing to think until one’s very last breath. It is a “culture” in which edonism has become a new religion, a cruel goddess to whom countless serfs sacrifice to their last day.

I do not doubt these types – and their friends, relatives, all those who “support” them into an unrepentant death, with the great dangers for the ones and the others – all find Pope Francis quite cool. It goes with the godless mentality.

Francis would, methinks, find them cool, too.

Say Thanks To Cardinal Burke! 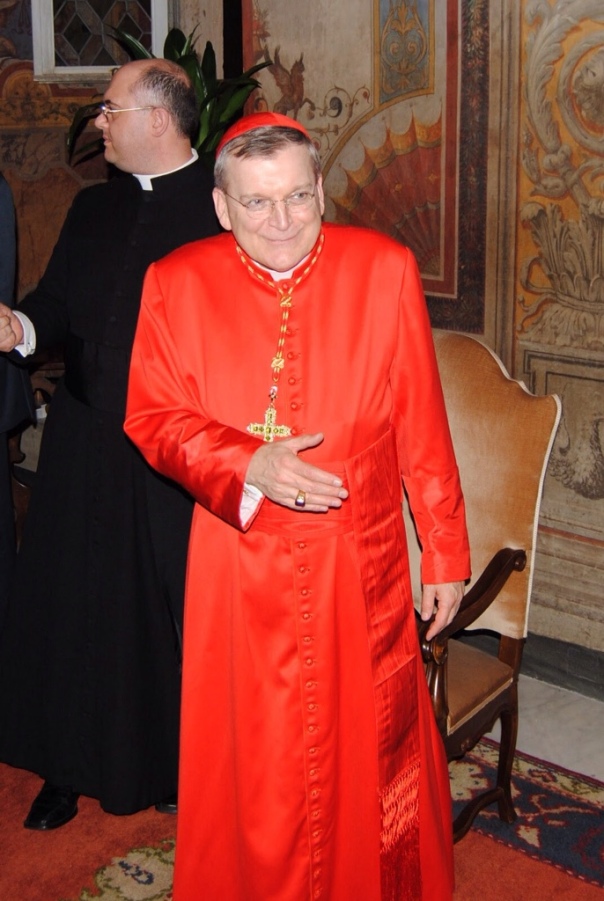 This petition is not a petition, because it does not ask anything.

It is, simply, a way of saying “Thanks, Your Grace!” to this excellent man.

The signatures will be given to him personally.

It is good to have, once in a while, the opportunity to say “thanks” in this direct way to those who care for our salvation, rather than for their own popularity and quiet living.

Comments Off on The Great Neo-Modernism Overkill