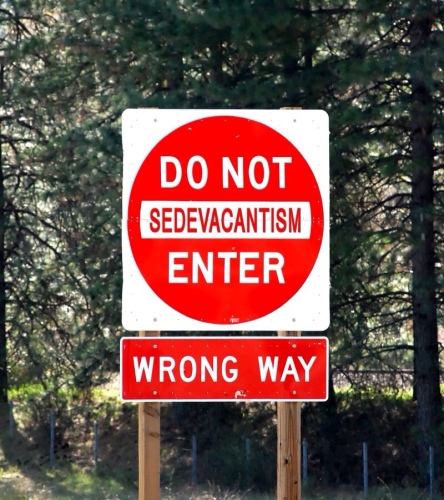 Sedevacantism can, and in many cases certainly is, the product of an arrogant mentality; the behaviour, so to speak, of the one who goes away with the ball because he doesn't like how the match is going. In other cases, though, Sedevacantism is – unfortunately – espoused by sincere Catholic souls; that is, by people who, because of a warped conception of what the Earthly Jerusalem is, find no other way to keep believing in the Church than by, in short, deciding that this Church has become a huge, worldwide deception, and opening an emergency exit door for themselves in this rather childish belief that the true church be the pure and incorrupted one to which they, and very few others the world over, belong. As if Christ had allowed almost all, bar the very few smarties, to be deceived as to what the Church is.

Still, the fact remains: some of these Sedes are faithful Catholics who, whatever their errors, I believe far more pleasing to God than, say, 97% of Western Bishops. Some of them are, also, very good at explaining Catholic doctrine, and defending the Tridentine Mass. This is no surprise, as in many cases we are talking, whatever Voris & Co. May think, of very orthodox, high quality Catholics.

Should we, therefore, link to their material, may the one or other Catholic blogger have asked ask?

I use a case-by-case approach. I have linked to Sedevacantist sites when I thought it ethically correct to link to the source of the material of the day – a blog article, say – but I have never felt it necessary to go as far as to link to their books, or videos, or any other extensive, systematic exposure to them, even in arguments not pertaining to Sedevacantism. Say: a Sedevacantist can have the best videos about the Tridentine Mass around, but I would still not link to them.

I would, though, do it in the one case, that I thought this material the only reasonably good material available; not, of course, without a warning about the other convictions of the author.

I must say that, up to now, this has never happened, and I very much doubt that it will ever happen. It's not that we have ever needed Sedevacantists to explain to us things we did not know. The world of Traditionalism – including all Catholicism before the Council – is simply immense, and the Internet sources are becoming vaster every day, with more and more old books and other sources being made available. It's not that your reader has to watch a certain video, or read a certain article. Alternative sources are most certainly available.

Others will, of course, have different opinions. I only tell you which approach I personally consider best. In our disgraceful times, Sedevacantism can easily become a temptation for imperfectly formed Catholics, who in their desperation think they have finally found the answer to the events unfolding under their own eyes. I do not think they should be exposed to this temptation, unless there are very valid reasons for that.

Which is why on this blog you don't find link to videos of Sedevacantists – however good this videos might be – but only the occasional link concerning the issue of the day, and Even that only with a word or three of warning.

The Wrath Of Christ

The joy troops are those at the bottom...

I have heard many Catholics – priest and laity – speak about spreading the “joy of Christ”, or launching easy slogans like “Jesus is Joy”. Not one of them – priest or lay – ever made to me the impression that he could ever convert anyone truly interested in his own salvation, rather than mere fun. If anyone were to embrace Catholicism based on that, let me tell you he will be bitterly disappointed.

I can't hear anymore how, in a society focused of fun and self-satisfaction, Catholicism is presented as a dispenser of the same stupid surrogates of happiness most people are already actively looking for outside of it. In this “joy” thing there is – there must be, in these stupid times of ours – an implicit promise of something for nothing. This becomes very evident in the words of The Most Astonishing Hypocrite In Church History (TMAHICH, if you are new to this blog), who always talks of Christ as if He were simply giving to us, and never asking of us; but it is also rather transparent in your typical Novus-Ordo “homily for all the family”, in which sin or punishment are never mentioned lest it should cloud the sunny Sunday morning of the pewsitters, in which everyone drives home to his Sunday lunch feeling so astonishingly good.

Well, I beg to disagree.

I think that in this day and age, every unqualified talk of “joy” smacks so much of Disneyland, that it should be carefully avoided unless it is put in the proper context. A world that does not fear hell will never put joy in the context of Salvation. Rather, it will put it in the context of quality of life. A big, big mistake, because a properly formed Catholic conscience will give one fears, and pangs of remorse, utterly unknown to, say, the rosewater mainstream, “I think I believe in God”-Anglican. This ex-Anglican convert will also discover that many things he thoughts harmless aren't harmless at all, and he is not allowed to skip Mass. Not even then, when he goes around “spreading the joy of Christ” instead.

This “joy” thing is, in the present world, nothing more than deception. It is marketing under false pretences. It encourages a wrong thinking that infects even those who should know better, and who profit from it to willfully ignore their own grave sinfulness because hey, they “spread the joy”.

If you ask me, every discussion about Catholicism, and every attempt at conversion, must begin with hell. Hell, and nothing else, is the reason why we are Catholics, then if there were no hell I would enthusiastically chase skirt for all I'm worth, and every consideration about what Catholicism says of it would be a gentle suggestion – but hey, God is luv, right? – at best.

My reason for being Catholic is hell, not joy. My fear of hell, not this promised Disneyland of the nuCatholics, is why I remain Catholic. The harshest truths on the planet are the very foundation of the only true religion of the planet. Christ died for me on the Cross, so I can go on doing what I please, because Cool Bearded Guy takes care of me anyway. You can't even begin to talk about Catholicism without mentioning those harsh truths; because if the world is the merry-go-round with guaranteed happy ending peddled by Francis and by all those modern apostles of joy, there is no reason whatever to go through life full of “Catholic guilt” (also called sanity, and fear of the Lord) and encumbered with all those prohibitions to do, and obligations to do, that are everywhere in the life of a Catholic.

Forget the talk of the “Joy of Christ”, at least until the planet has forgotten what it really means.

Focus on the Wrath of Christ instead.

It may be less pleasant, but it is far more salutary.

I read on the blog of His Hermeneuticalness the very apposite suggestion to pray the rosary without being discouraged by the fact that one is easily distracted. Not only do I commend the attitude, but will also bore you with a couple of added personal reflections.

1. I have been praying the Rosary (five decades) every day for many years now. I will not tell you that I do not get distracted. But this I will tell you: that my desire to pray has greatly increased. It did not happen in one day. It's not that one starts praying the daily rosary and magically he feels different. It grows on one, little by little, imperceptibly but, with the years, evidently. Repetita iuvant.

2. My motivation in praying the Rosary are the well-known promises of the Blessed Virgin to those who pray the Rosary every day. In these years, they have been a great consolidation to me. I would consider them a perfectly valid reason to soldier on even if I were not to notice any spiritual advancement in the next – if God gives them to me – forty years.

3. The Church knows that we get distracted. If you think all those people praying the Rosary in Church before Mass never get distracted, think again. They cannot ask the group to please start the decade again, because they got distracted when they remembered they forgot to pay the gas bill. They soldier on, and try to do their best. This is how it has always worked.

4. Even the Liturgy takes account of distractions. The “The Lord be with you” parts at Mass are designed to gently regroup distracted minds on the Mass before crucial moments. Again, this is not a post-V II invention. It's a smart adaptation to the shortcomings of human nature.

5. In our very precise, technological age, we seem to think everything must be perfect. When we pray a Rosary, we may therefore think this rosary must be perfect, because every one of the countless machines around us do exactly the same. I doubt our ancestors thought in the same way. I rather think they accepted human imperfection in everything they did, and prayed the Rosary as humans always did and always will do: humanly.

The wise Italian knows that il meglio e' nemico del bene, “better is the enemy of good”. Do not allow your quest for a better Rosary to deter you from praying it.

Pray the Rosary. Pray it as devoutly as you can.

But pray it anyway.

The article linked here is a rebuttal of a Sedevacantist criticism of John Salza, already mentioned on this blog and a proposer of classical Traditionalism in SSPX style, which they call “recognise and resist”.

I have read the article in its entirety, and it seems to me both the original article and the rebuttal are worth reading; and whilst I do not doubt that the Novus Ordo Watch troops are composed of good and sincere Catholics, I find the one or other criticism levelled at them to be rather well-chosen.

The article deals mainly with the matter of Papal infallibility and the correct reading of the Conciliar documents; apart from the little and understandable blunder of calling Francis’ torrential apostolic exhortation “encyclical letter”, I find the author’s every sentence worthy of careful reading and agreement.

The article does not deal with the other, so to speak, missing leg of modern…

Comments Off on Sedevacantism Debunked