How To Get Rid Of A Heretical Pope 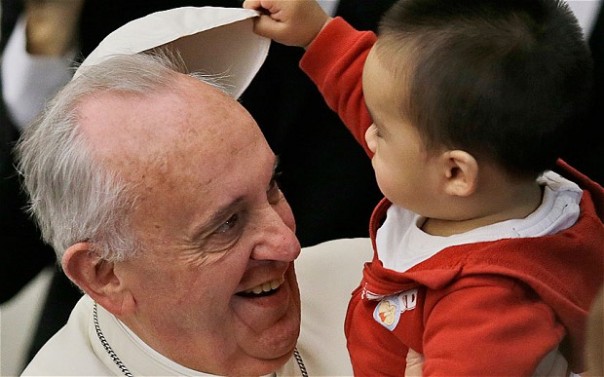 “You aren’t the Pope! You are Stan Laurel! Away with this zucchetto!”

And here is the second part of our “Remnant” voyage into the realm of papal heresies: can the church depose a heretical Pope?

“Yes, she can”, is the answer. Follow the link to learn the why and how. An entire section is dedicated to the obvious mistake of the Sedevacantist perception.

Unfortunately, the absence of a true practical application of the principle (the interesting case of Marcellinius (or Marcellinus) would probably not apply to Francis, and perhaps some will doubt it happened in the first place) makes it very difficult to discern a clear path if Francis were to “go nuclear”.

Say: who would take the initiative of starting the convocation of an ecumenical council? How many bishops would take place? With what money would the entire exercise be financed? How would one know the council is legitimate?

In practice, I think if Francis were to proclaim even formal heresy he would have perhaps one third of the bishop on his side, and probably much more than that in the West. The initiative would probably start from a dozen or two Cardinals, but then there is the problem of what would happen if Francis were to, say, depose every bishops going to a certain ecumenical or even regional council, or all the Cardinals denouncing his heresies. The bishop’s conferences faithful to him (the usual ones, which are the richest ones) would prevent every money from being used and everyone of their bishops from taking part. We would have a situation of chaos out of which only the determination of the right side would, one day, allow to get out. We would, again, have a situation in which we would have to turn to authentic beacons of Catholicism to tell us that the ecumenical council is in fact suitable for its purpose or not, the Pope validly  declared heretic or not, and so on.

If push comes to shove, I think what will happen is that a number of Cardinals (a minority, for sure) would (God willing) take the initiative, with a handful of champions like Burke or Pell asking for an abiura from the Pope, and threatening with an ecumenical council to have him deposed if he does not comply. This would carry with him a number (how big?) of bishops, and would then allow to put in motion a mechanism as the one described in the article, though with how many bishops and what kind of controversy (again, if Francis says they are relieved of their office; though obviously he could not relieve them of their sacrament of holy orders) would remain to be seen.

A scenario like the one leading to the abdication of Marcellinius (with an obvious wall of bishops on the right side) is, I think, not realistic. A situation of chaos and prolonged conflict is far more likely. This scenario would, if it were to pass, certainly destroy the reputation of Francis as Pope, and burn to the ground his standing for the following generations; but it does not mean that the Pope would end up being deposed.

Nor can we say that the Holy Ghost would not fail to allow the Church to reach a speedy solution of the controversy, as the example of the Western Schism has already showed to us that the promise of protection does not extend to the absence of a very long uncertainty – at least in the mind of many, even honest Catholics – as to who is the Pope (or whether there is a Pope) in the first place.

I think, though, that the method used against John XXII (an impressive, if local, body of bishops, religious and theologians poses him in front of the choice between backpedaling and open calls of heresy) would already have a great probability of success, because a vain man like Francis would immediately know that his papacy would go down in flames for the only fact of a doctrinal rebellion against him; even if this rebellion were, for whatever reason, not to translate into his deposition.

It is, in any way, consoling to know that whatever we will face has been the subject of very long and serious debate in the past. This allows us to put the dramatic age we are living (and deserving to live) in the proper context, without panic or flights into the unreal, only apparent refuge of “siding with the Pope”.

If we come to a nuclear scenario, think twice before you side with him.

Posted on November 20, 2014, in Catholicism, Conservative Catholicism, Traditional Catholicism and tagged Heresy within the Church. Bookmark the permalink. 5 Comments.

← Let Us Not Be Afraid Of The “H” Word!
Now It’s official: Francis Hates You. →
Loading Comments...