Not for the first time, one is overwhelmed from the sheer amount of populism, stupidity, and utter heresy coming out of the mouth of this amateur Pope.

Some days ago he threw around generic statements about everyone belonging to the Church being saved (isn’t he awfully nice, this Pope? So generous!). I wanted to write about it, but then the other bomb in Turkey exploded. Actually a very big one, accompanied by minor explosions concerning the usual stupid things Francis always does and says.

I wonder whether I should rename this blog “TMAHICH: Chronicles Of A Horrible Papacy”; but then I reflect a Catholic blog should always be about more than the latest utterances of a subversive Pontiff, and even in matters of Franciscan insanity should pay attention to the broader view, rather than to the single fact.

Therefore, I will now have to choose whether the Black Friday Salvation Sale or the “Bless us, Schismatics, because we are the True Church” gets my attention. This, of course, unless in the meantime Pope Dope comes along with some other statement about, I don’t know, prostitutes being the salt of the earth, thieves being a wonderful example of Catholicism, and people who don’t prostitute themselves and don’t steal being dead inside, or something like that…

I will, therefore, not give up. Just bear with me if I can’t report about everything. It is safer for you to assume that for every major piece of nonsense I write about, TMAHICH has uttered somewhere between two and four if you put everything together (from the outright blasphemy to the shameless populism, and from his excursions in the realms of economics to his immigration policies, and scientific beliefs).

In all this mess, though, there seems to be a sort of silver lining: it cannot be doubted that the secular world out there pays less and less attention to the man, now more and more broadly regarded as an old nincompoop with no clue by the atheist mass media and the binge drinking masses.

This Pope has always been an attention whore, but his whoring seems to become bigger as the degree of attention he gets decreases. One and a half year ago, washing the feet of infidels and women caused a huge uproar. Nowadays, accusing the US of “State Terrorism” (which he did; though obviously the Jesuit way, as “who am I to judge” and everything else) barely registers on the boredom scale.

It will, I am afraid, get worse before it gets better, because whoring even more is what the attention whore does when she does not get the desired attention. But at some point, even this bonehead might understand that the public isn’t applauding, and might be persuaded to avoid making as ass of himself as much as he can.

Boy, I am ashamed. 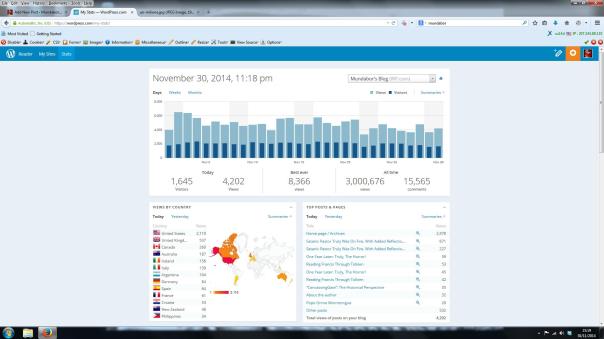 On the First Sunday of Advent 2014, this little effort has reached the milestone of 3 million pageviews.

I have already posted some reflections for the 1 million and 2 million pageviews. There isn’t much to add to that, and I invite the reader to reread what I wrote then (column on the right hand sight).

This time, there were two or three factors that influenced the otherwise fairly predictable life of this blog: Google restructed their algorithms, thus almost de-googling me out of the picture and causing my page views statistics to get a not-so-mild heart attack. It is not that I care so much about how many pageviews I have, but it is sad that so many people have been deprived of the possibility of casually discovering my blog… 😉

As Google has a very dominating position, if Google “downgrades” you (and many others, of course), you are going to feel the pinch. These events also let one understand how far too powerful Google is in directing what information reaches its readers, that is: the planet. Use alternative services whenever you can.

The second factor was the necessity to reduce my little effort during Summer, basically reducing it to the status of “very little effort”. A reader rather ironically wrote on another site that I was on a “semi-hiatus”, which wasn’t so far away from reality if, I think, perhaps a tad overstated. But yes, I had to reduce the effort. Thankfully, this was when Francis was having, at least according to his standards, an extended after-grappa summer nap.

I was pretty much up and running again starting from September, and had the privilege of being able to follow with great attention the mess of the Synod; days of intense praying and writing (and more than some “angering”), that I will not forget so easily. The Synod brought an increase in pageviews, as an astonished planet started to go on the Internet to see whether Catholicism was still alive. Google was, in the meantime, gradually seeing the error of its ways (as they always do: their algorithms “self-heal” themselves, until the next shuffling of cards happens and the error-and-remedy circus starts once again…) and I noticed a slow normalisation in page view in September, and actually – and for obvious reasons – a sharp increase in October. But with the years I have come to understand in a very direct, day-to-day way that Google truly are the masters of the information on the planet, and will become more so in the future unless we react accordingly. Please take the habit of using other search engines, of which there are many. everything is better than a Big Brother deciding what information the planet gets.

As to the future, I can predict a continuation of what has happened up to now: fairly boring one-to-two messages a day routine, reblogs whenever I think them interesting, or apposite, or I remember to do it, or I have the time to do it; and occasional periods of lessened work of, hopefully, short duration.

I hesitate in calling my blog “successful” because of the pageviews, even if I know that my blog is very successful as metrics go. I think success in a blog should be measured by other criteria, with fidelity to the Magisterium and the ability to be incisive and vocal, avoiding the omnipresent PC rubbish of our times, being the main ones. Therefore, I considered my blog “successful”, and was proud of my little effort, even when 200 pageviews in one day was a great achievement.  Similarly, I consider “successful” all the blog which have the above mentioned qualities.

I hope that this further milestone will serve as an encouragement to the one or other of my reader to either start a blog (I am honoured with more than one blogger telling me I was the main inspiration behind his decision; I hope the Blessed Virgin was listening…) or to continue with what they are doing if they feel discouraged.

Do not blog for the pageviews. Blog for the Blessed Virgin. But then use the pageviews as an incentive to do more or to keep doing what you’re doing, knowing that there are people, out there, who will absorb what you write and will perhaps, in time, not only take advantage of it themselves but also influencing other people with the knowledge or simply the passion (no one, I hope, will deny me at least that) they find on this site.

A special thank goes to all those readers who, with their comment or faithful “blog attendance”, make this little effort a not-so-little one.

A last prayer, as always, concerns the unworthy wretch now typing these words. A sinful being, unable to live the life he repeats to himself every day he wants to live. A man who must lower his head in shame at the thought of those in his circle, both living and dead (and mainly women, it must be said) who do not write any blog, but give or gave an example of heroic Catholicism with their daily life, quiet and unassuming heroes whose greatness is discerned, on this earth at least, by far less people than this should, or should have been, the case. I am far, far below their standard. I doubt I will ever get even near to it, though I will, with God’s grace, never stop trying. But I can think and, by God’s grace, I can write. At least that, and the prayers, the time, the anger, and the insults, will hopefully be counted for me one day.

Please consider remembering me in your prayers as regularly as you can, if you use this blog regularly. I spend on this blog one to two hours a day most days, gratis et amore Dei, and actually incurring costs. Three Hail Marys will take you less than two minutes. In your charity, please try to find them. 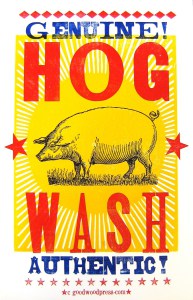 “At the evening of life, we shall be judged on our love.”

This phrase of St. John of the Cross is, at times, misused by the usual cafeteria Catholics.

By mentioning it, they state or imply that love saves. I am sorry to burst anyone’s bubble, but love doesn’t save.

Every monster is capable of love. Every serial rapist and killer can have people whom he loves. Most of them certainly have. Therefore, love is not the key opening the gates of Heaven.

Nor is that kind of love that translates into “doing good”, but with no faith in God behind it. It has always been Catholic teaching that salvation is the fruit of the works that come from the faith. Faith with no work will yield no salvation; but so will the works without the faith.

If you reject Christ until the end, Christ will reject you in…