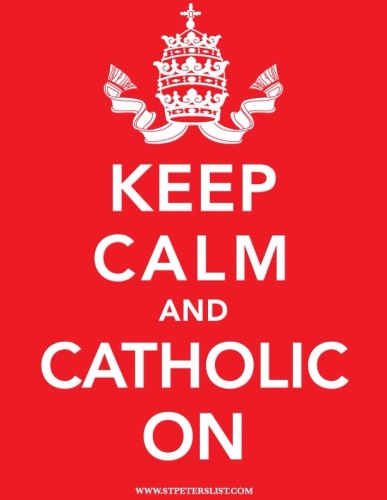 It is with a heavy heart that I must inform you that the work of demolition continues. At the new Consistory in February 2015 further 10-11 places will be occupied. One can only fear what kind of people will get the red hat. Last times it was Baldisseri, this time it might even be Cupich, as Cardinal George has the well-known health problem (a prayer is OK).

Please, Lord, free us from this scourge.

It may have been, on occasion, that the one or other Saint or Prophet compared God to a mother. But those who read or listened to him knew, and know to this day, that God is Father, not Mother.

This is not a questio de lana caprina. The implications are huge. Mothers forgive, fathers punish. Though both love their children, a father is needed to provide the necessary, so to speak, enforcement of love. The mother can, in fact, give unconditionally and forgive everything exactly because she has, at her side, a husband who does not give unconditionally, and does not forgive everything. The complementarity, but at the same time the very marked difference, of father and mother is as clear as the sun. Still, Jesus calls God the … Father always “Father”, not “Mother”.

The description of God as Father is more than a neat traditional use in Christianity: it is a dogma (“I believe in God, the Father Almighty…). This goes through the very marrow of Christianity: Rex Tremendae Majestatis is not a definition very fitting to a mother. Christ is King, not Queen (no doubt Francis would prefer the Queen) and (in the same dogmatic statement) “our Lord”. “Lord”, or “Lord of Hosts” you hear at Mass both do not really conjure a very motherly image. Confutatis maledictis, flammis acribus addictis, (voca me cum benedictis): where, pray, is the baby talk? Or shall I quote from the Gospel, where Jesus open talk, often brutally frank, is all the contrary of “baby talk”?

The God of the Christians is, so to speak, as “Father” as they come. Not so, though, in other religions, in which the local god is seen also as mother; if not in actual, “official” words at least in the rich imagery of, say, Hinduism and Yoga. The Pagan Greeks and Romans had goddesses. Christianity explains and promoted a different reality: one God, and He a very strong one. It’s not that for Christians God is Father just because it sounded better at the time…

Pope Francis, the disgrace that he is, has long fought his own personal war against the God of the Christians. He cannot imagine God doing more than “slapping us on the wrist”; he sees mercy as the defining content of God’s action; he implies – as he did again only weeks ago – that everyone, or at least every Christian, is saved.

Clearly, Francis has no symphaty at all for God the Father. His concept of God is not to be reconciled with Christianity. His is the god of Sixty-Eighters, unrepentant rebels, and nancy boys.

Today, things have reached an extreme, as Francis has come so far as to compare God to a mother talking baby talk to her child, uncaring of ridicule. Now, the baby talk might be sweet in a young mother, but anyone who tries to sell you this as the hinge of the relationship between God and you is, in short, selling you a fraud.

Francis’ aim is clear: if God is a mother, every “harsh” rule is not fitting to Him, and its “harsh” enforcement is extremely, well,ungodly. If God is a mother blabbering sweet nonsense to the babies in her lap, the babies can piss and poop over marriage and communion, over the liturgy and the commandments, and over sexual rules as much as they please, and she will never, ever punish them with separation from herself. On the contrary: unconditional love and boundless acceptance of everyone and everything will be the new Golden Rule.

If Francis is right, Christianity is a fraud, and it has been all this time.

I for myself will continue to believe in God, the Father Almighty.

Francis will, one day, discover who of us two is right.

Comments Off on Nativity Carol

One of the most influential French journalists, and a man of cultural Jewish origins, has launched a well-deserved attack to the mixture of populism, socialism, atheism, pauperism and outright stupidity currently emanating from the Vatican.

I invite you to follow the link to Rorate to enjoy it in full. It truly is a barrage, a whiff of fresh air in the midst of Francis' stench, a cannonade of common sense against the papier-mâché bastions of modern mainstream stupidity.

The tones the good man uses are astonishingly frank for a radio interview. More to the point, they criticise Francis in the name of the same Christianity Francis is betraying. This is, so to speak, Mundabor for families.

It took a nationally known non-Christian to tell the French elementary truths about the not-so-humble walking disgrace that is TMAHICH. It took a non-Christian, because most Catholics stop at vague utterances of mild disagreement, saying that they are “confused” by Francis, or find Him “difficult to understand”. Sheesh.

In essentials, there's nothing “confusing” in Francis: his opposition to Christianity is very clear! Only those in the dark about the fundamentals – very many of those, alas… – can still be “confused”, but certainly every properly instructed Catholic has nowhere to hide by now. It has now come to the point that (more or less) Jews must tell them out loud what they keep ignoring, pretending to believe that the mass media could manage to create a virtual Pope in complete opposition to the real one.

This one is certainly the first Pope whom even cultural Jews not only despise, but despise as… unChristian! What else does one need to open his big, blue Pollyanna eyes?!

Yours truly has been saying it for a while. From blogs and brave journalists, the criticism would spread to higher ranks within the Church and more influential public figures. This would make the conflict far more public, and impossible to ignore forever for the mass media. Slowly but surely, Francis' exposure as a six pound note would become mainstream. This would utterly destroy not only his credibility as Pope, but his efficacy as a tool for the secular world and the devil. I dare to say that this is exactly what is happening; helped, no doubt, by TMAHICH's astonishing behaviour during the Synod.

No Pope is more useless to the devil than a Pope ignored or despised by his very own. As Francis loses ground among serious Catholics, his traction as “innovator” loses all energy, because he is exposed as traitor. The enemy may well like the traitor, but he knows that once the traitor has been discovered he is of no use.

Granted, the vast mass of the ignorant and the superficial still thinks Francis is a “cool guy” of sort. But as it becomes more and more known that real Catholics do not follow him, his influence will vanish. It's like discovering that John Elton has become Pope, and the Church has noticed it. Of what use will he be?

This Pope is an enemy of Christianity. Only few of us were saying this in the past months. Now it is mainstream radio fare.

Rejoice. Oportet Ut scandala eveniant. Once the excessive drinking has taken place, the pain of the hangover is necessary in order for the Church to vomit Francis, those like him, and all the toxins of the “church of mercy” out of her own body.

And vomit them she will, in God's good time. But you, my dear reader, you continue to fight your battle no matter what absurd novelties Francis will try to introduce, and no matter what apparent successes he may appear to achieve. God also works through miserable sinners like us, and gives us the means to work towards our salvation by throwing our hearts, our mouths, and our keyboards in this religious and cultural battle between light and darkness, reason and madness, Catholicism and Francis.

Read Francis through Castro. You will see that all he says has its own coherence. Even Jews notice it.

Pollyannas prefer to be deaf, blind and stupid instead.

A prayer for the conversion of Monsieur Zemmour is certainly in order.