Mirror, Mirror On The Wall: Who Is The Gayest Of Them All?

I have not written anything about the new Cardinals, because little has come to my screen, up to now, concerning them.

But if this chap is indicative of the general quality, we are in for a very rough ride.

The new Cardinal-designate Dew is such a Kasperite he should get the t-shirt. Nothing in what he says would let you think he is a Catholic. He sounds like a Presbyterian wannabe-bishop, bitching and whining around as he reflects on what shade of pink would make him look better.

We do not know about the sexual orientation of this walking disgrace. But the emotional “argument” of the man is so effeminate that one truly wonders.Are there no men left among the leftists?

Firstly, note the expression, apparently used already as early as 2005:

“the scandal of hunger for eucharistic food”.

This is a purely emotional appeal letting the Church appear an oppressive institution unjustly starving the faithful. “Scandal”, “Hunger” and “food”, three words with undisputed high emotional content, are here abused in the most stupid of ways in order to promote a sacrilegious agenda.

If this is the right logic, Catholicism is no more. Better said: if this is the right logic, Catholicism has been a fraud for 2,000 years: an oppressive religion bent on starving the faithful rather than encouraging them on the path to virtue. I am sure the Presbyterian Mr Dew is fully aware of this; he just doesn’t care, or perhaps he even believes it.

The purely marketing-based, emotionally charged, whining and bitchy approach of this man to the job he is supposed to do is just as infuriating. The non-existent logic of the chap is explained as follows:

When the bishops were preparing for the synod, they had a “huge” response, he said: “25 percent of the people responding were nonpracticing Catholics and the message was that ‘It’s impossible when we’re told that because we’re using contraceptives we’re intrinsically evil or that we’re living in an irregular situation — the language is so negative that it doesn’t help us.’

“So, my intervention was: Let’s not be concentrating on rules, but looking for language that helps people and encourages people in their journey toward God.”

This is so gay it runs already for the Elton Prize 2015.

‘course, says the man. It is so obvious to him that the biggest problem is that… there are rules! Let’s not be concentrating on rules, then!

How someone who cannot even hear that his behaviour is “intrinsically disordered” and get all in a tizzy even at being told that his situation is “irregular” (“irregular”? “Irregular”, my foot! Concubinage! Grave scandal! Mortal sin! Satan at the door!) would, then, be encouraged to abandon it once he is told that he will not be told anything unpleasant to him and no one will concentrate on rules is beyond me. Only an idiot with no experience at all of life, or an effeminate priest, could ever come to this kind of conclusion.

It’s not only that this is a complete capitulation and renunciation to basic Christianity. It is that the entire thing is made in such an emotionally effeminate way that even the reading of it induces vomit.

I cannot avoid imagining that Francis went to his luxuriously appointed but oh so humble entire hotel floor and asked: “Mirror, mirror on the wall: who is the gayest of them all?”

“I am surprised you even asked”, I think it added.

If this chap is in any way representative of the average quality of the Cardinals appointed by Francis, I can only conclude that TMAHICH’s dagger is now aimed at the very heart of the Church.

St Michael the Archangel, defend us in battle.

2014 was a record year for Pope Francis, which ended with more than 6 million people attending Vatican events, as recorded by the Prefecture of the Papal Household, between general and special audiences, liturgical celebrations and addresses before the midday Angelus.

This is the incipit of a Zenit article  concerning the activity of Francis during 2014, his first – and hopefully last – full year as Pope. If you want to know, Zenit are those fearless warriors who pulled the interview to Cardinal Kasper after the latter was caught lying like a South-American dictator on a good day, keeping the truth away from their readers and potentially damaging the reputation of the journalist who had obtained the interview.

In this case, the involuntarily hilarious contribution (we are informed that 2014 was “also a year of spiritual gems distributed daily from the altar of Saint Martha’s Chapel”, besides being informed about “the pastoral visits in Italy, each one marked by a strong word of the Pontiff”) does put an aspect of this pontificate in the foreground: the obsession with numbers as a way of measuring success.

The childish satisfaction with which we are informed of how many twitter “followers” the Pope has, or the counting exercise of how many wanted to hear his heresies live during last year are absolutely nothing to do with the job and the duty of a Pope; but they have all to do with a pontificate that measures his “success” with the worldly  metrics of followers, listeners, “person of the year” awards, and the like.

From a Pope like this you would expect the most absurd things. We may wake up one day and read that he has posed a football ball on the altar of a big church, just because the heathens out there might like it. Absurd, you say? I know. I am merely making an outlandish example of what a Pope drunk with, and addicted to, popularity might be able to do…

Which is, if you really want to know, another record. 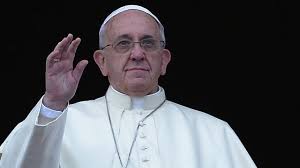 Let us imagine, just for the sake of it, that Satan were to manage to take human form, enter the Church, climb the career ladder and, one day, be elected Pope by very naive Cardinals fully in the dark as to what they are doing. What do you think he would do?  Would he boldly declare: “I am, actually, Satan, so please start dismounting everything here, and let’s move over to Satan worship?”. Of course not.

What he would do is, no doubt, something along these lines:

1. Downplay the role of the Church in the economy of Salvation.

2. Downplay the importance of Doctrine;

3. Scream “luv” as loud as he can, and slowly implant a new religion of fluffy feelings instead of his real enemy, Christianity; saying, for example, that what the herd thinks or wishes is what the Holy Ghost wants them to think and wish.

4. Subtly downplay or implicitly insult everything Catholics hold as sacred: telling them that Jesus willfully deceived His Apostles, or that the Blessed Virgin may have thought she had been deceived.

5. Introduce a new god, a god of “surprises”; that the real surprise is, in fact, Satan he would, of course, not say. What the “surprises” are he would make, though, abundantly clear: desecration of communion, and acceptance of sexual perversion as the two mainstays.

6. Deflect the attention from spiritual issues, and direct it on purely social themes, say: poverty, social justice, the environment.

7. Continuously insult those good Catholics whom he knows would be fierce critics of his agenda. They are bad, he would say. Hypocrites. Dead inside. Holy card faces. Old maids with flight attendance smiles. Ugh!

8. Fake humility, modesty, and nearness to the poor; whilst living in luxury anyway, and behaving like the Prince of Bullies. Promote a personality cult as a gateway to a cult of man, in which the (un)faithful are encouraged to worship themselves and their own errors.

9. Downplay the very role and public image, and with that the authority, of the Papacy; unless such authority comes handy to repress sound Catholic orders, or react to one’s own bishops demanding orthodoxy.

Please read this little list again, and tell me whether any one of these points would not be in the interest of Satan, and would not push forward his own position, if he (absurdly, and for the sake of the discussion) became Pope.

Now: for the sake of the occasional readers of this blog, among which must be some leftists of – as all leftists – not very bright intellect, I must make clear that I am not stating that Francis is Satan. I know there would be no need to write this, but it is fitting to do it just to make this blog post, ahem, dumbo-proof…

What I am getting to is that this clown of ours is doing everything that Satan himself would do, if he were to (absurdly, and for the sake of the discussion) be elected Pope.

This is the main problem with The Most Astonishing Hypocrite In Church History (TMAHICH ™): whether he is willingly bent (yes: bent) on damaging the Church or “merely” caring about his own popularity among the unbelieving herd without any thought for the consequences, the result is the same: he does everything that a hypothetical Pope Satan would do do inflict to the Church as much damage as he can.

Read the list again. Compare its points with the reality on the ground.

And be ready for confrontation in the family, at work, with friends, in church, everywhere.

TMAHICH has given another example of boundless hypocrisy and utter carelessness today for what he has said yesterday.

The family is being “bastardised”, he decries. Nowadays, so much is called “family”.

The family would be less bastardised if there were no Archbishops sending their priests in the slums, allowing mass sacrilege as they permit everyone to receive communion in a context in which 80% or more of couples are not married and, therefore, presumably 80% of children are bastards.

There is, in fact, no way to bastardise the family more effectively than what Francis has done as Archbishop and is doing as Pope: allowing mass sacrilege in his own diocese, devaluing marriage as he allows concubines to receive, marrying in his capacity as Pope public concubines, allowing the Archdiocese of Buenos Aires to baptise poor children “adopted” by goddamn dykes, and in general sabotaging…