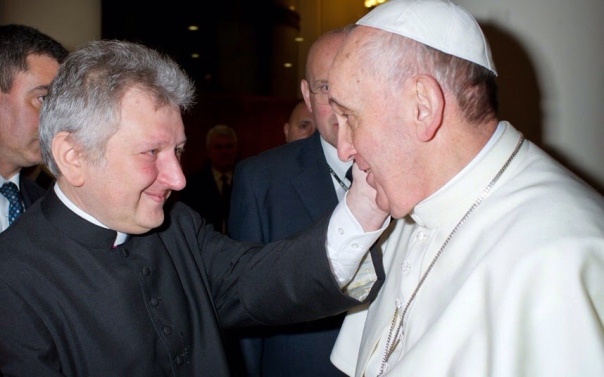 “We should do more for the LGBTPTSRTGS people, Frankie dear…”

There is a reason why I keep calling the Bishop of Rome TMAHICH, The Most Astonishing Hypocrite In Church History. The reason is that the double-tongued falseness of this man simply defies imagination. We see evidence of this all the time.

“Rabbitgate” is just a few days old, and it now turns out Francis has reached a new depth in his constant encouragement and promotion of sexual perversion. The events unfolded as follows:

1) A Trannie writes to the Pope and complains about his “discrimination” because hey, his fellow Catholics and (the horror!) his own priest just do not want to “accept” he is a shameless perverts publicly espousing his abomination to the point of surgical and/ or hormonal manipulation. You would think the entire planet is on drugs, but hey…

2) Pope Francis, of whom the kindest thing that can be said is that he might, actually, be on drugs, calls the man on the phone and expresses him his sympathy, or solidarity, or support, however you want to call being accomplice in another man’s sin. He does so twice. The second time he does it on Christmas Eve, and it is OK to cross yourself at this point.

Disturbing. If this is not the mark of a man deep in the lies of Satan, I do not know what is.

3) The two phone calls are not enough. Francis feels he has truly not done all he could to encourage every sort of sexual perversion. Whilst most of us, endowed with basic decency and a normal degree of innocence, would be horrified at sitting in the same room with a Frankenstein-like joke of Satan, Francis has such a need for them that he needs to have both the trannie and his “partner” flown from Spain (at whose cost, I’d love to know) in order to get an official peep into Tranniedom; something for which, evidently, his own house bitch Ricca is not enough. This happened in the last few days, after TMAHICH’s return from Manila, the sacrilegious mega-mass, and The Rabbit Show. The Trannie is about to “marry” (of sort) his own “lover”, but do not think this further encouragement of scandal deters Francis is any way. Whatever goes against Catholicism and basic decency is clearly good for him.

Satan, my dear readers, is looking at you, and laughing out loud.

At this point the news was clearly leaked, and the Vatican does not comment up to now. I take it this means at least that someone within the Vatican cares for his own soul and wants to expose Francis for the satanical tool he is. But considering the antics, the hypothesis that Francis might be on cocaine should be taken seriously and investigated accordingly, because this kind of loss of the sense of reality is a typical, well-known manifestation of cocaine addiction.

At this point, words fail. New ones at least. So it is fitting to repeat the old ones:

This Pope is an old, lewd man either attracted to every form of sexual lewdness, or a pervert himself. He is set to sabotage Catholicism, a religion he obviously loathes. If he believes in any god (which I doubt), it is some home-made Peronist deity obsessed with the “environment” and with a penchant for sexual perversion (basically: himself). He will do whatever he can to insult Catholics as he drives them away from Catholicism and into his own religion of social envy, environ-mentalist terror, economic chaos and sexual depravity. He is not recognisable as Catholic in any way, shape or form, as it becomes absolutely evident every time he does not read from a script but says what he really thinks and does what he likes. His lack of elementary prudence and decency justifies the suspicion of drug use. He makes the work of Satan day in and day out. He might be, let us say it again, a sexual pervert himself.

This is the current Bishop of Rome: a shame too big, too brash, too blatant, too much in-your-face to even claim any title to subtlety. A poor intelligence with a low degree of education, he isn’t even able to put some nuance in his subversive work so that more people than the plain dumb may be deceived. But he is testing the dumb too, or at least the less stupid among them.

Possibly a pervert. Possibly on cocaine. Evidently slow-witted. Most certainly not Catholic. Full of himself. Full of shit. A first-class hypocrite. A tool of Satan.

There. The Bishop of Rome described in just a few short sentences.

Still: pray for the poor sod, that he may see the light one day before he goes to hell.

He is a tool of Satan, a heathen, a saboteur, a danger for souls, the scourge of the Church.

But you, you be a Christian.

As an encore, enjoy “Loretta” again.

A Shame To His Own Priests

The papal doctor was somewhat alarmed…

It seems that “Rabbitgate” has caused the eruption of pent-up clerical frustration concerning this Pontificate. You see it not only in the blogs run by Catholic priests, but also in the homilies one hears (and I hear) around. In short, the healthy clergy are busy warning their sheep about the Pope.

A rather striking example of this is in the blog “Triregnum”, which has the translation of an open letter sent to the Pope. The author, a Parisian priest whom I suppose anonymous (but not so much, from the details he gives) expresses in a pithy way not only the confusion among his sheep but, more relevantly, the fact that even for a priest it is becoming more and more difficult to believe in the good faith of the man. A man believed by more and more of his colleagues more than just an embarrassment, rather an agent of evil.

This is how far we have gone. It is important that we do not run to the help of the Pope Peron by asking that he be left alone once he has backpedaled on his statements. In this case, the statements reveal the man, and the backpedaling reveals his hypocrisy.

Many a priest, bishop, and Cardinal will go all the way in their desire to help Francis to destroy a church in which they do not believe. They might well become the majority one day. But it is consoling to know that there are still good priests – and be they polluted by V II ideology to some extent – who can still recognise what they have to deal with during this Pontificate.

May Francis’ reign be of short duration, and covered in shame afterwards. It seems to me there are many priests sharing this wish.

Sad, but truthful article about the pitfalls of political correctness.

A Trannie (that is: a faggot who wants you to believe he is a dyke; or such like; I always get so confused…) is now suing CrossFit, a fitness organisation which organises its own CrossFit Games. In her modesty, she would be happy with $2.5m.

The reason for Mr (note) Jonsson to become rich is that he had a “gender reassignment” some years ago, but the organisation does not want to allow him to compete among the women.

In case you are thinking this is an April joke, no. It’s simply California.

My spontaneous thoughts on the matter:

1. If CrossFit is the “gender equality” organisation, as they might well be, I sincerely hope that they lose the suit, or have to pay the Trannie a lot of money. It is only fitting that the owners pay the price of…

Comments Off on Justice For Loretta!