← Saying It As We See It
Mirror, Mirror On The Wall: Who Is The Gayest Of Them All? → 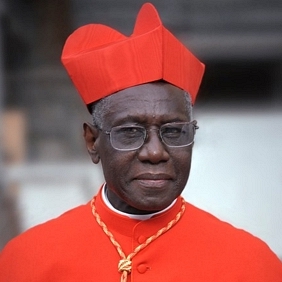 Read on Rorate Caeli the news of Cardinal Sarah openly warning Francis & Co. about the heresy of detaching the Magisterium from pastoral practice.

His words are brutally clear, and I quote them here again. The emphasis is, I think, Rorate’s.

“The idea that would consist in placing the Magisterium in a nice box by detaching it from pastoral practice — which could evolve according to the circumstances, fads, and passions — is a form of heresy, a dangerous schizophrenic pathology. I affirm solemnly that the Church of Africa will firmly oppose every rebellion against the teaching of Christ and the Magisterium.”

To call the “theology on his knees” “heresy” and “dangerous, schizophrenic pathology” is, I think, as clear as any word ever pronounced by Cardinal Burke himself. The clear mention that the Church in Africa will “firmly oppose every rebellion” drives another concept home: we will…

Posted on April 25, 2015, in Traditional Catholicism. Bookmark the permalink. Comments Off on Cardinal Sarah Gives A Stern Warning To Francis.

← Saying It As We See It
Mirror, Mirror On The Wall: Who Is The Gayest Of Them All? →