Pity St John The Baptist. The poor man did not have the fine insights of prime Judas like Baldisseri, Kasper, or Francis.

If he had had, he would have understood that the situation was simply “irreversible”. Look, They say, it would have been ideal if Herodias had remained with her husband. But clearly, there was now a new situation of which St John had to take account; a new reality to which he should have reacted with compassion and sensitivity. Then there was a child, in her teens; a very delicate age, in which separation from the father can lead to lifelong scars.

Where was St John’s compassion? Did he know anything about inclusiveness? Had he ever heard of mercy? Why did not prepare a path for Heros and Herodias? Why this cruel exclusion?

I cannot imagine what would happen to St John today. He would probably be beheaded by Michelle Obama (she needs only one hand for the sword) after Barack Hussein Obama has played for her the dance of the seven faggots (a gender-neutral celebration of diversity), in front of an audience of screaming feminists, lesbians, and assorted man-pussies.

Now as then, the motivation behind the justification of sin is the desire to sin, to cover sin, or to profit from it.

God will not be fooled.

I cannot avoid imagining that Herod, Herodiades and Salome, upon knowing of Francis’ and his minions’ last push, commented “this is a bunch of people we will get to meet rather soon”.

Comments Off on St John The Baptist And “Irreversible Situations”

Comments Off on Repetita Iuvant

I’ll have the first go:

Francis: “what is for dinner?” 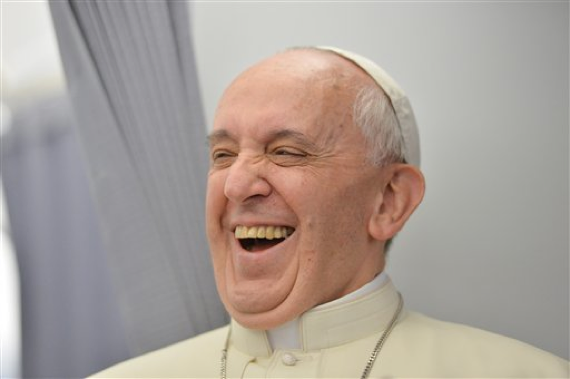 We are, probably because of too many movies and novels, accustomed to think of the evil man as a man of uncommon intelligence. Whether it is The Joker, or Doctor Moriarty, we quite naturally link a great evil attitude with great gifts turned bad.

It does not have to be so. History shows us that a lot of people are evil without being smart, actually often being the contrary of smart. In Italy everyone knows the history of Masaniello, but you do not need to search so far. The newspapers are full of idiots who want to do evil and show how stupid they are in the process, from the one massacring people in church to stoke racial hatred to the one robbing cigars and threatening the shop owner in front of a camera and then proceeding to walk in the middle of the street with the cigar box well in sight, and then again attacking an armed policeman and thinking…. no one knows what. Many other examples could be made.

No. Very often, evil is stupid. This is actually much more common than the other case, then there aren’t many Goebbels or Stalins around.

Francis is a great example of this. He never run a country, or a party. His ascent to the Papacy came without having absolutely anything to show for himself besides running down, as much he could, a Seminary and a couple of dioceses. Incompetence and stupidity are – together with his great hypocrisy – the one true mark of his career.

This man simply isn’t smart. Actually, this man simply is a nincompoop. He is very uneducated, but too stupid to even try to hide this from the masses. No, he must tell you how much “power” air conditioning has instead, and that our extremely clean Western Countries are a “pile of filth”. He just reveals himself like the uneducated cretin he is; but, being an uneducated cretin, he does not notice it.

Francis is your typical pub rant champion who thinks how to redo the world, and has barely an idea of how to use knife and fork. He is one of those resentful old men people sincerely pity, or heartily despise, or both. Alas, some reckless Cardinals made him Pope, because he came from such a forgotten corner of the planet that his misdeeds weren’t noticed.

But his being uneducated and stupid does not mean he is not evil. He is not retarded, so he still knows what he is doing. His motivations are clear enough. The ideology driving him has been made manifest many times.

That pretty much covers it.

Every one of my readers certainly remembers Pope John Paul The Not-So-Great kissing that blasted Koran, instead of burning it.

That disgraceful episode had, at least, two extenuating circumstances: the Pope was clearly not compos mentis, and the Vatican officials tried to hide the act of a man now clearly gaga from the world. Alas, the Muslim side couldn't believe their luck, and ran to leak the photo. V II happens.

I see no extenuating circumstances in the Evil Clown kissing a Valdensian bible. Whilst a Valdensian Bible is not a Koran, it is a heretical book, and there can be no doubt that the kissing of heretical work is offensive to God.

In addition, even a Patheos blogger and my cat understand that this kissing was not the act of a man who is “not there with his head”, but the deliberate act of celebration of a Protestant attitude as expressed by their heretical texts. Francis is, as always, promoting heresy and trying to put into your head that it's perfectly fine to have a preference for vanilla, strawberry, or stracciatella if you don't like the Catholic Chocolate. Hey, we are all united by our love for ice cream! Ah! Uh? No?

John Paul II was clearly gaga when he kissed the Koran. But Francis is the very epitome of a Papacy gone gaga. A Pope not missing one occasion to sabotage Catholicism, and reproaching Catholics for believing in Catholicism at the same time.

They say one should not grossly insult the Pope.

Comments Off on Reblog: The Parental Encouraging Of Sexual Perversion

How To Pervert Your Child

I read around that 2015 could be the name of the “gender neutral” name. This are names that do not say whether the poor baby is a boy or a girl. This will give a substantial contribution to the confusion of the poor boy, or girl, and make him an easier pray to sexual perverts, particularly because a boy, or girl, raised in such an environment is not very likely to grow in the midst of sane people: manly men and feminine women.

The parents rejoice. “My son is questioning at the moment. We are very excited to see what comes out”.

A way even more promising to pervert one’s child is, though, the direct embracing of sexual perversion.

A boy called “Loretta” will have a direct attempt to make of him a pervert made on him from his youngest age. He will not remember being called anything other than what he is not, from his youngest age. When asked a school, he will be trained not to say what he is. His little friend will be considered no more than an option, basically an embarrassment.

Apparently,the actor Ryan Reynolds is attempting that on his own child. The man and his wife/companion/whatever have not been directed to any doctor. It is not known to me there are any initiative to take the child away from them and give him in adoption to normal people.

Perversion of one’s own child promoted and celebrated. This is the world we live in.