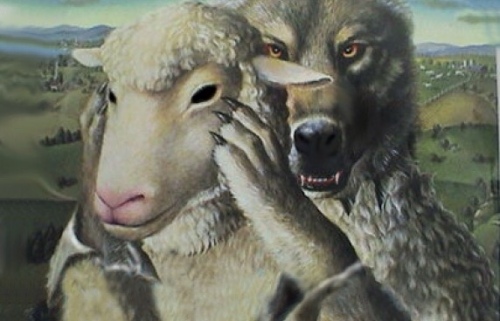 The enemy’s priest (the one who has lost his faith, or gives his allegiance to Satan) is unavoidably led to pervert the sensus catholicus of the sheep. He will try to set the sheep on the wrong path under the disguise of piousness. He will manipulate them into thinking that if they want to be good Christians they must, in fact, do the exact contrary of what they were always told before. He will do all he can to lead the faithful as far as he can from his lack of faith, his mistress, or his sodomy. He will get away with an awful lot, because his sheep are mostly naive or stupid, and most of them very badly instructed, and very many find it simply convenient to pretend the traitor is a “man of God”.

How could such a priest proceed to do that? Let me make some hypotheses.

1) He could start by devaluing piousness. If you pray the rosary, you are bad. Devotional practice is not only downplayed, but criticised. All in the name of true spirituality, of course. Some people count their rosaries, you knew that? No, don’t laugh!

2) He could devalue purity, honesty, integrity. He might, for example, say that it is good to “smell like the sheep”. Suddenly, having dirt on you is something good, and being clean is something sanctimonious. This will, methinks, work particularly well for the homosexual priest, who will not resist the temptation to praise in some way the dirt in which he lives and breathes and to which he is, being a pervert, attracted.

3) He will “enlarge” Christianity into embracing its enemies. For example, he might say in church that a Muslim should “hold on to his Koran”. Suddenly, Christianity has been openly opposed in the name of the fantasy Christianity the enemy’s priest has chosen as his Trojan Horse.

4) He might, if he feels so inclined, proceed to attack the Trinity Itself. This is a bold move, I admit; but he could, for example, Say that Muslims and Christians “believe in the same God”. One small phrase et voilà, the Son and the Holy Ghost are out of the picture in the name of… some strange tutti frutti religion that is not Christianity anymore, but lets people feel so fuzzy inside.

5) This priest would then say homilies at Mass. He would not get the chance pass. The attention of the pewsitter would then be constantly diverted from heaven, and pointed firmly of earthly matters. This would be the ideal starting point for a socialist preaching: injustice, inequality, all the long list of Socialist grievances could be propagated from the pulpit with the thinnest varnish of Gospel quoting; which he can, like every idiot and Satan, do without difficulties.

6) The perversion of the minds entails the destruction of the modern, middle-class, well-ordered society. The preaching in favour of illegal immigration would therefore be tireless. This is another occasion to bash the good middle-class Christians. Besides, the one or other grateful illegal might well be amenable for acts of sodomy.

8) Such a priest would, of course, accompany his lack of faith with tangible, visible signs of his attitude. For example, he could always avoid to genuflect or kneel in front of the blessed Sacrament, but openly kneel in front of jail inmates. He might do this out of simple laziness and disinterest in a God in Whom he does not believe, or he might do it quite on purpose. But my hunch is that he would do it all right.

9) A man like that would also influence the faithful in more subtle ways: perhaps the Blessed Virgin thought she had been deceived? Perhaps Jesus Himself deceived the Apostles? Perhaps the miracle of the multiplication of bread and fish was a purely symbolic one, a “miracle of generosity” because people suddenly share what they have? Purity, Sanctity, Faith are, in this way, continuously undermined.

10) Nor would the Sacraments be spared; why oh why must public concubines be “refused” they “hunger” for Holy Communion? Why, oh why, are we so “judgmental”? And should we not find “ways” to “accept” sodomites in our beautiful community?

11) Of course, the fear of the Lord would have to go. God may scold, but he never slaps. Crap like that. Soon the sheep will believe salvation was achieved just for the feat of being conceived.

Such a priest could find many other ways to spread his impiousness and divert from his own faithlessness, or even sexual perversion. But I think I have given you an idea.

God forbid, such a priest should become Pope!

But the Cardinals would never do such a mistake.