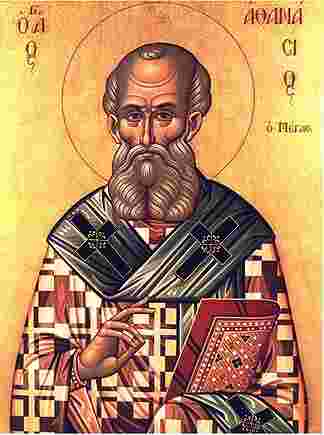 Did not walk to the first heretical “c”hurch down the road: St Athanasius.

When a huge mess happens in his own community, a Protestant thinks: “where do I go?”. At that point, he begins to research the local “c”hurches, hoping to find one within reasonable distance where he, his wife and/or his children will find what he thinks sound Christianity.

In a way, it’ s like divorcing your own “c”hurch; but then again I think most Proddies do not have much against divorce, so this is par for the course.

We are, by God’s grace, different. We do not think about divorce even when things get difficult. Not from the spouse, not from the Church. We know there is only one Church, and that is exactly where we belong.

This Church (note the capitalisation) can have big, big problems; but the Church (note the capitalisation) it still is. We do not start looking for an alternative in sensible driving distance. Rather, we start to pray that the only Church  – to which we are linked by an indissoluble bond; a bond whose breaking would, if done with a sufficient degree of culpability, send us to hell – will soon come back to sanity.

By God’s grace, we have been led – by birth; by marriage; or by the events of life – to link our destiny to the one of the Only Church. We hold this bond as sacred, and this allegiance as unbreakable. We are linked to the Catholic Church, forever.

We know that the Heavenly Jerusalem – the Church in Her supernatural dimension – is the place where we belong. We also know that the Earthly Jerusalem – the way the heavenly Church operates here on earth – is all but human, and might at times shows awful signs of fallen humanity. We know – because we have educated ourselves – that this Only Church has gone on many occasions through difficult times, but she has always emerged victorious in the end. We know that these victories were not due to causality, but were rather due to the efforts of the people whom God inspired to fight the good fight. We also know that these “recoveries” were seldom fast, and rather caused a climate of “uncertainty” to go on for several years of decades.

By God’s grace, I have been baptised a Catholic.

The deal I got was Catholicism, not a strange Papolatry bordering on Satanism.

By God’s grace, I hope to die a Catholic, no matter what Francis does.

I will endeavour to die in the religion of my forefathers. Francis and his can, with all due respect, stuff themselves.

← Hhmmm….. What Is St Paul Trying To Say Here?
Meet Francis, The Mainstream Heretic →
%d bloggers like this: