Pope Diocletian And You 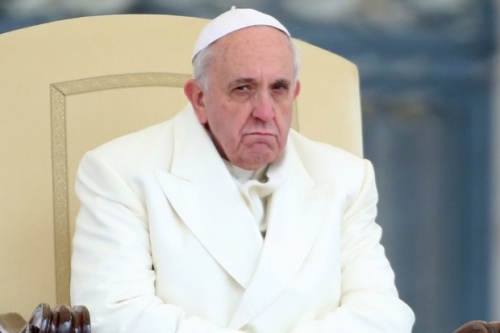 Damn party poopers… It could have been such fun…

You might be tempted to think, in the horrible situation in which we are living, that we can still relax thinking that Francis will pass like everything else, and normal service will be resumed when the man kicks the bucket.

Allow me to disagree.

Francis will not be a parenthesis in the history of the Papacy. He will be remembered in centuries to come, and will be taken by theologians as example of horribly wrong Papacy until Doomsday and, I would say, beyond.

Granted, his Papacy might not be long. However, earthquakes do not take very long, either, and duration is a bad way to measure a Pontificate. Alexander VI’s wasn’t such a very long papacy (though it was long enough for the times); on the other hand, the almost legendary Sixtus V was Pope for around five years only, but what a deep impression he left…

Francis could (God pleasing) die today, and the damage he has already done would still be incalculable. He could, however, go on reigning, and do much worse still (think only of the appointment of Cardinals and Bishops). You can say that Hiroshima was a parenthesis in the great scheme of things, but it was still Hiroshima.

Francis is not even Hiroshima. We are witnessing a Papacy whose damage will soon reach (mutatis mutandis) WW I proportions. This is a man going against the Church with a hatred worthy of Diocletian. This is no time to relax.

We must (as bloggers, commenters, journalists) call for the Cardinals and Bishops to rebuke Francis and ask that he resigns. If the Catholic world out there starts to become vocal on this, courageous prelates will have the possibility to take this ball and demands that Francis converts to Catholicism or goes.

The number of heretical statements, and of occasions in which Church teaching has been obviously contradicted, are legion. And whilst some of the worst was said hiding behind the finger of Mr Scalfari (albeit the Pope never condemned any of it), all the off-the-off heresies and all the aeroplane nonsense (from “who am I to Judge?” to Catholics who “don’t have God” because they believe in absolute Truth) has been pronounced by the man’s very mouth, in front of many witnesses. If it’s not formal heresy (I do not think it is) it is in my eyes repeated public scandal, continued sabotage, and persistent open defiance of elementary Catholic teaching.

Yesterday, surfing around the Internet, I had the pleasure of noticing that Condomgate has caused the harshest condemnation yet from several Catholic bloggers. They are not relaxed at all, and very rightly so! Francis will be one day dismissed as Pope Diocletian, but only because good Catholics refuse to relax and defy this madness, not because this huge mess is dismissed as a temporary hiccup, or a pontifical cold.

Francis is clearly attacking Catholicism without any shame now, openly and frontally. Do not treat him as if he were just a temporary embarrassment. Treat him for what he is: an enemy of Christ and His Church.

Comments Off on The “Flak” Reblog

Comments Off on The First Nowell