← Old Evangelisation
From The Altar Boy You Will See The Pope → 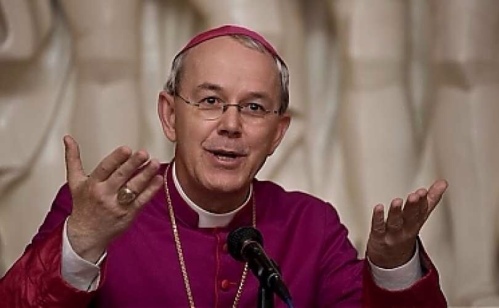 This comes straight from another century. It makes one’s heart rejoice. It certainly made my day.

Bishop Schneider does not shoot directly at the Pope. However, the Gatling Gun is aimed so near to the Papal entourage, that LifeSite news found it appropriate to ask Father Lombardi about Pope Francis’ position concerning the abuse of children as “agent of change” in the climate hoax.

In Italy we say that this is talking to the wife so that the mother-in-law may understand. The man does not point the Gatling Gun at the Pope, but the bullets are directed at all that the Pope says.

The other notable fact is the explicit attack to other bishops as “so-called Catholics”. At the moment I cannot recall any such explicit attack from a non-SSPX bishop, though I am sure there have been. But the fact that these attacks are accompanied by (literally) Old Testamentary warnings makes Archbidhop Schneider’s intervention extraordinary.

Battle lines are being drawn. I wish our good bishops (the few remained) were more open in their criticism of all the rubbish coming out of the Vatican these days (largely from Francis), but I can only salute any intervention like this one.

Still: very grave errors were promoted by Pope Francis only days ago. I recall scandalised interventions from countless bloggers and commenters, from some good journalists, from theologians lay and religious, and from some Catholic institution. At the moment, I cannot recall any rebuke from any bishop or Cardinal. We shall see, they tend to be slow.

For today, let us salute what we get: a glimpse of heroic XIX Century Church in the midst of the rubble of the XXI Century one.