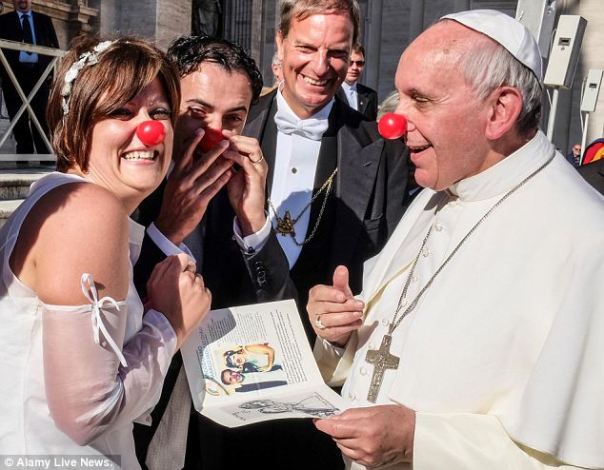 Can’t imagine why I am not suprised….

[EDIT: APRIL’S FISH! Congratulation to those who have spotted it. A big tsk-tsk to the others… 🙂 ]

I have jested a couple of times that Francis might do something like this. Apparently, yesterday he did.

In the video posted (who knows for how long) on the Radio Vaticana site, you can clearly see the Pope trying to dance some Tango move with an unidentified woman.

It is all meant in jest, of course, for people for whom nothing is sacred and the word “obscene” is too “judgmental”. But there we are.

The short video shows the Pope trying to “instruct” the woman on the proper stance (close body contact), and then slowly moving some steps with her before stopping, laughing and apparently protesting that no, it’s too much fun, he can’t go on and he has an age. The video appears filmed by a somewhat inexperienced hand, and is certainly not professionally made. My impression is that the impromptu scene was filmed, clearly in jest, by some friend of the woman, and some genius at Vatican Radio thought it would increase the popularity of the Humble Heretic. Methinks, said genius will soon have some explaining to do.

You might say (and I would agree with you) that the heresies of this Pope vastly exceed in evil intent the tango steps, and the incurable vanity of the Evil Clown. However, this does not justify the way this man mocks everything that is sacred, including the office entrusted to him.

Only a few days now, and when the torrential Apostolic Excrementation is released we might have problems on a quite different scale than a tango dancing Pope. But again, if a Pope is so shameless to dance the tango (in the way his age allows) and display a behaviour unthinkable only a few years ago,then we cannot be surprised if he dares, at some point, to flirt with the unthinkable in his official statements, or at least to promote heresy and sacrilege with them as much as deemed feasible or practicable.

If, in a few days, the Apostolic Excrementation proves that the Pope is willing to push hard the boundaries of heresy, remember that this is a Tango-Loving Pope.

Which, truly, says it all.