The Donald Can Still Lose 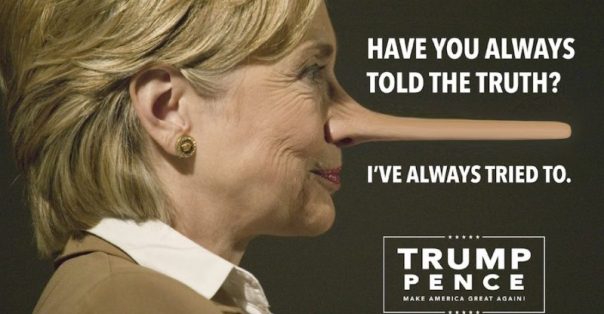 It is now several days after the first debate, and I see contrasting signals. I will not publish all links, but I think the relevant information will be available with some research.

I agree wholeheartedly with Rush Limbaugh and Newt Gingrich.  The first said (can’t find the link) that Trump “won” because after the debate it was clear that everyone sees him as a legitimate contender, as Presidential material. The second stated that Trump had a long-term win  because whilst the Hillary clan can feel well about her performing as they had hoped, Trump had the better arguments on the issues.

In the last days I have made the following observations:

Trump could have destroyed Hillary, and he didn’t. I think in part he was afraid of appearing too aggressive, and been seen as not enough “Presidential material”. However, from what I have seen and read I think hubris played a part: Trump had just neglected to properly make his homework, as one must do if he want to profit of all the occasions given to him, or create them when they are not given to him by a scandalous “moderation”. Can’t imagine the Gipper failing to prepare because he thinks his personality will carry the day anyway.

As to the polls, it seems to me that, in general, they are less encouraging now that they were before the debate. Whilst I discount most of the polls, even the ones I like most (because I like the methodology and found the results consistently serious and trustworthy) and follow most closely, Rasmussen and LA Times, gives mixed signals: LA Times indicates a consolidation of Trump’s advantage, but Rasmussen indicates the train has stopped, at least for now.

My impression is that Hillary’s warship was badly taking in water and had a broken helm the morning of the debate, and is now at least in a position to float and manoeuver again. USS Trump got very near, but failed to finish USS Crooked.

As to “who won”, the question is badly posed. Crooked Hillary is a glib serpent with 30 years’ experience in politicking, Trump is – his mastery of the screen notwithstanding – navigating new waters. Again: as long as Trump is seen as a credible candidate, he wins, because exactly this is what everyone says is the biggest obstacle for him. Every debate and every TV appearance help Trump to become “normality”, and he is well on its way to gather full support form the Republican voters. However, I am amazed at the bad faith of all those pretended professional journalists who think that the Trump camp can steer a sudden, spontaneous, worldwide conspiracy to manipulate all the instant internet polls, and only the two or three thousand picked by them, with a widely overrepresented Democratic component, reflect reality. Still, there’s no ground for rejoicing: Trump isn’t pulling away, which is exactly what he would have done if he had been better prepared – and a tad more assertive – on Monday.

Another – and last – element I find worrying: I have read an article (can’t remember the link) about the voter registrations. They do not show any dramatic surge in those states with many disaffected, non-voting, old-ish Whites. This indicates, I think, that no Trump landslides are to be expected in states like Pennsylvania or Ohio, though Trump might well take the first and he is doing quite well in the second. As the registration deadlines in th evarious states approach, this is an opportunity that will be lost.

Mind, I am not pessimistic. I still think Trump can win, and win in a landslide. I think that the polls, in general, tend to underrepresent his vote in the same way as they regularly failed to catch his audience during the Primaries. However, it seems to me that Trump is, once again, being his worst enemy out of excessive security and undue cockiness. He must learn the lesson from the first debate fast, because he only has other two occasions, which I think will attract a smaller audience than the big novelty of the first debate.

The man has a huge talent. But Donald Trump keeps being his worst enemy.

Declaration Of Fidelity To The Church’s Unchangeable Teaching On Marriage And To Her Uninterrupted Discipline. 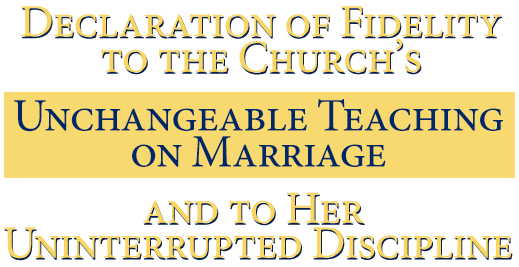 Declaration Of Fidelity To The Church’s Unchangeable Teaching On Marriage And To Her Uninterrupted Discipline.