← Francis: Making America Great Again One Visit At A Time
The Religion Of Peace And The Smiling Policeman. →

Vatican Visit: The Good, The Bad And The Ugly 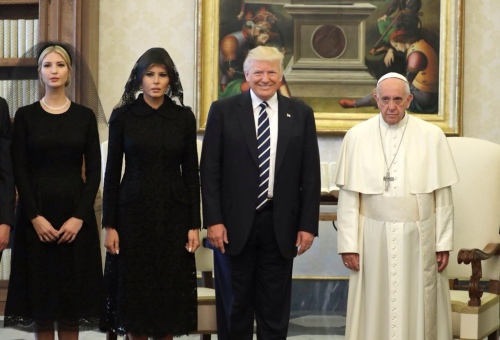 I could not resist posting this photo again...

Melania Trump refused to wear a headscarf in Saudi Arabia, but she wore a veil in the presence of the Pope. Good girl.

Less good are the rants of those idiots on Twitter who took scandal for this, as if if was some kind of hypocrisy or double standard to follow your religion but not the religion of others. This, apart from the fact that, apparently, Melania follows the right religion anyway. Bad losers.

But what is truly ugly is that Francis blessed Melania's rosary. From the man who mocks those who “count their rosaries”, I wonder how much this blessing is worth. The man does not even kneel in front of the Tabernacle. If I were Trump, I would suggest to Melania's that she throws away the thing immediately.

Posted on May 25, 2017, in Traditional Catholicism. Bookmark the permalink. 12 Comments.

← Francis: Making America Great Again One Visit At A Time
The Religion Of Peace And The Smiling Policeman. →
%d bloggers like this: