Francis Is Evil, Ignorant And Stupid, Not Demented

The question has recently been posed whether Francis is gaga. Easy as it is to call him a nincompoop, the obvious answer is no, he isn't.

There is method in what Francis does. It is merely his extreme ignorance of everything (from history to theology, and from canon law to simple logic) that lets him appear at times as if he had a screw or three lose.

Imagine the most ignorant, arrogant, anti-clerical old Communist man in any South American biggish village. Picture him as he pontificates about things he doesn't know, hates the Church, loathes the churchgoers, despises the Catholic customs and traditions, is at war with the rich, the powerful, the educated people who always despised his hateful ignorance. Close your eyes and see him swearing in the tavern, in the public square, in the queue at the grocery store. Picture him in vivid colours. We all have known at least one like him.

That man has become Pope.

Francis is not simply one who talks like him. Francis is him. Like the ignorant boor he is, he thinks he is the best thing since Juan Peron. Like the old, spiteful village hater, he will open his mouth everytime he feels like it. Like him, he will take revenge of everyone who dislikes him every time he can.

This is the simple reality of this Pope, for everyone to see. An unspeakable boor has been elected Pope, and it is all too obvious that he would behave like one.

There is no need for theories, because what we see every day is explanation enough. 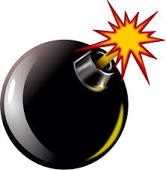 The Evil Clown has given an ultimatum to the Nigerian priests who, since 2012, have refused to accept their Benedict-appointed new bishop: either they solemnly promise allegiance to him or they will get rid of their job.

I do not know enough of African matters to know whether this long confrontation is to do with orthodoxy or tribalism. However, I can tell you this: if it is to do with tribalism it is a shame that priests be concerned about tribal matters even as they shut up about Amoris Laetitia and the other countless scandals of this pontificate. I would not expect from a priest to be in the first line against Francis' heresy, but if these priests are ready to refuse obedience to a (actually, two) Popes for many years in lesser matters, then they should feel the more obliged to do it in the big ones; the more so, as they clearly have the numbers and, reassuringly, no sitting bishop.

If the controversy has been, all this time, about orthodoxy (disabuse yourself of the notion that Benedict appointed good bishops; many of them were simply atrocious), then it is still shameful that as a battle for orthodoxy enrages the elephant in the room (Amoris Laetitia) is not addressed.

Either way, this Nigerian issue shows us that the clergy is abandoning us even when one could hope that they are, for a change, trying to shepherd their sheep. If it's not silence for the wrong reasons, it is protest for the wrong reasons. And this in Africa, which should give us hope with its alleged orthodoxy.

The world should by now be aflame with condemnations of Amoris Laetitia.

What we get is, I fear, tribal controversies.