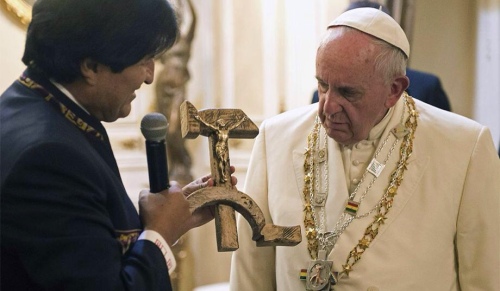 The Evil Clown unceasing complains about social inequalities. It might be good to give him a much-needed lesson in basic Christianity.

There is no “equality” in Paradise. Even saints are very different to each other in their degree of saintliness. They consequently enjoy the Beatific Vision in different ways according to the spiritual condition in which they were when they died; a condition that cannot be changed after death. Where the tree falls, there it remains.

Yes, Jorge dear: there are saints who are “more saints” and saints who are “less saints” in Paradise, because God wants it so. God is, as you should know, not “egalitarian” at all.

If, therefore, it is established that infinite goods like the Beatific Vision are given in different measure to different people, how can it be of any real relevance that the infinitely less important – and, sub specie aeternitatis, infinitely unimportant – material goods are allotted to us in extremely different ways?

Francis obsession with inequality is brutal evidence of his complete lack of faith in God, who pushes and decrees inequality in matters if infinite value. Egalitarianism is sheer atheism. Communism is just a variation of it.

This Pope is an enemy of the Faith. He despises it possibly more than Marx and Engels did, then I wonder whether Marx and Engels themselves went around unceasingly berating, insulting, despising pious Chritians or pious Catholics.

This Pope is utter and complete rubbish. He is Satan's Number One Tool (and a tool he certainly is).

It is necessary that every Catholic interested in his salvation considers him pure poison and a daily danger to his and his beloved ones' salvation. The man is, being Pope, worse poison than Marx and Engels.

Inequality is in everything: our looks, our brains, our finances, our graces.

God wants it so.

What a stupid, petty, faithless, communist Pope we have.