The Miracle Of The Sun, The Blasphemies Of Pope Francis, And The Betrayal Of Unfaithful Catholics. 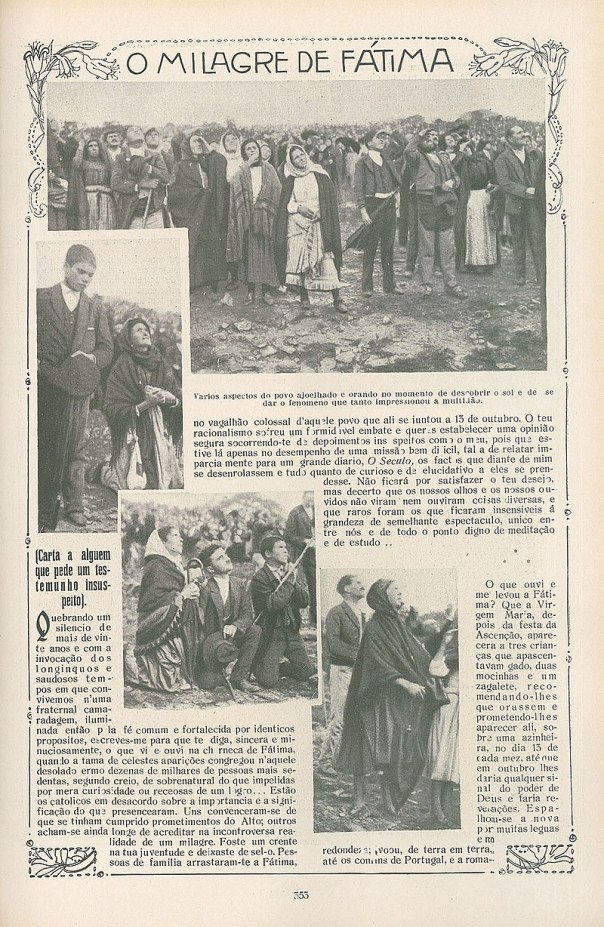 The Miracle of the Sun is 100 years today. What happened at Cova da Iria on 13 October 1917 is one of the greatest gifts a merciful God and His Mother ever gave to a skeptic humanity, prone not to believe unless they have seen. On that day, tens of thousands have seen. We reflect on the events 100 years later and recognise, once again, that we keep being unfaithful, and undeserving of the gifts given to us.

One hundred years later, the consecration of Russia has not happened. In addition, a lurid process of obfuscation of Our Lady’s warnings has taken place, steered by the same Vatican.

And then there is the vision of hell, happened during the series of apparitions:

These are the words with which Sister Lucia described the vision:

“She opened Her hands once more, as She had done the two previous months. The rays [of light] appeared to penetrate the earth, and we saw, as it were, a vast sea of fire. Plunged in this fire, we saw the demons and the souls [of the damned]. The latter were like transparent burning embers, all blackened or burnished bronze, having human forms. They were floating about in that conflagration, now raised into the air by the flames which issued from within themselves, together with great clouds of smoke. Now they fell back on every side like sparks in huge fires, without weight or equilibrium, amid shrieks and groans of pain and despair, which horrified us and made us tremble with fright (it must have been this sight which caused me to cry out, as people say they heard me). The demons were distinguished [from the souls of the damned] by their terrifying and repellent likeness to frightful and unknown animals, black and transparent like burning coals. That vision only lasted for a moment, thanks to our good Heavenly Mother, Who at the first apparition had promised to take us to Heaven. Without that, I think that we would have died of terror and fear.”

One hundred years after the series of events in Fatima, culminating on the miracle at Cova da Iria, the extremely brutal warning on hell afforded by this terrifying vision has obviously escaped the current Pope; who, just days ago, allowed without recantation an interview to be published in which he, to use the arrogant words of the atheist journalist author, abolished hell.

One hundred years later, the Church is living a crisis – nay, a satanic infiltration – that seems to threaten her very existence, and the reigning Pope tries to transform the Church in the exact contrary of what Fatima stands for. One hundred years later, it is fair to say that the reigning Pope is more likely to consecrate Russia to Stalin than to the Blessed Virgin.

As the last of the Fatima apparitions occurred, on 13 October 1917, an atheist, devastating ideology was only weeks away from taking power in Russia and start a reign of terror with global ambitions that went on for many decades. One hundred years later only some faint echoes of that terror remain, as Communist regimes have been almost extinct. What tragic irony that one of their few remaining, closeted admirers – as always, not in formal words, but in the espousing of the ideology, of the social hatred, and of the utter Godlessness – should be, of all people, the Pope.

This day should be a sobering remainder of the extent of our unfaithfulness and of the pit of irreligious thinking in which our entire Christian Civilisation has fallen in these 100 years, as millions of “c”atholics with tattoos, approving of their fornicating children, indifferent to sexual perversion, barely uncomfortable with abortion and utterly approving of contraception are busy clapping in church as they read sacred texts and give communion to each other with sanctimoonious “peace ‘n love” faces.

Francis has not come out of a vacuum. He is the product of decades of stupidity. Cova da Iria, 100 years later, reminds us of how big the stupidity has now become.