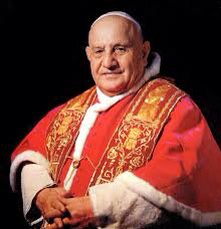 Don't worry. Everything will be fine!

As the world looks in astonishment at a Communist Pope (and this is not a joke or hyperbole: Francis truly is one who sides with Communists against the Church) I can, today, reveal the results of my several years long investigation into the root causes of, well, a Communist Pope. The culprits will be exposed, and humanity will not have to wonder anymore how this could happen.

The results are as follows:

Opened the Pandora's Box of “change”. Deluded in his senile confidence that the Chuch's dominance was so strong that nothing could touch it. Far too desirous to be liked. Too weak to make himself heard. Took out of the exile heretical theologians. The useful idiot of the subversives.

Astonishing, almost schizophrenic mixture of moments of sanity and impotent watching as the Church demolition took a much faster pace. Whino extraordinaire with no balls worth the mention after Humanae Vitae. Countless atrocious episcopal appointments. Allowed the religious sisters to morph into aggressive lesbian communes. Thin-skinned (no encyclicals after HV). Allowed the Durch Schism, the Dutch Catechism and many atrocities more. Apart from HV, useless to pretty much everyone but Satan.

(2.5. Pope John I. Declared Innocent for lack of inculpatory evidence as Pope).

PR-enamoured Pontiff very mindful of keeping an appearance of orthodoxy whilst allowing all sort of subversion to go on for more than a quarter of a century. Vaguely heathenish Earth-kisser for the joy of the cameras. Koran-kisser to boot. Had himself publicly criticised by Feminazi “sisters”, did nothing against them. Crushed South American heretics, allowed all the others to thrive. Countless atrocious episcopal a d cardinalatian appointments. Made of the Church a circus.

Only German Pastor in history to ever flee before the wolves. Does one thing right (Summorum Pontificum), ruins all the rest: horrendous appointments, spied by his own butler, changes his mind on the SSPX at the last second. Resigns because… too weak to fly to “world youth something”. Insists in remaining Pope so no one calls him a Celestine, creates even more confusion. Praises Francis to the sky. Drinks beer at 90, wants world to know. Announces his impending salvation to the adoring crowd.

Honourable mention goes to the Kitten Cardinals: who, by refusing to whistle after very publicly wetting their lips, showed Francis that there was pretty nothing he could not dare. Mao-Tse-Francis is just another byproduct of their cowardly silence.

I have said it.

Now I can sleep in peace.

Today is, as you all know, St Valentine's Day.

However, this obvious reference – albeit largely forgotten from the secular world – to Catholicism is clearly intolerable to the atheist, anti-Christian hordes now ravaging the West.

Therefore, St Valentine's Day is now (as heard twice on the radio) the International Day Of Love.

Can't wait for those evil people at the BBC to pick this up and give us another dose of soppy sentimentalism of the “gay marriage” type.

As I have often remarked, language shapes thinking. Those who want to subvert your thinking will first try to change your language: “gay” instead of “sodomite”, “dreamer” instead of “illegal”, “irregular family” instead of “concubinage”, and so on.

I'll stick to St Valentine's Day, thank you very much. May he pray for us in heaven.

And by the by, today is Ash Wednesday.

No mention of that on those radio channels.