Some would say that the greatest threat to Western freedom are rogue nuclear powers like North Korea and, one day (God forbid!) Iran. Other would say that the threat number one is rather Mr Putin ( may the Lord give him a long and happy life in power).

If you ask me, however, three names come to mind:

I notice with increasing frequency that Google searches are either doctored, or factually redirected, or both. Left wing sites and opinions tend to appear after right wing ones, without any obvious reason due to their perceived popularity. More overtly, Google often inserts “news” under your search, which smash leftist pages just in front of your eyes whilst conservative pages are ignored. Typically, you would find links to sites like the failing New York Times and the clownesque fake-news, ” Hillary Clinton has 9x% probability of winning” Huffington Post, but never the hugely popular Breitbart. This manipulation is quite open, and works automatically in favour of liberal sites without or before you making any tweak about how you want the site to look. The position of market dominance of Google makes such operations a threat of almost Goebbels-like proportions.

Facebook is another point in case, particularly after they tweaked their “focus” in favour of private pages, greatly damaging conservative outlets who had been “cleaning up” whilst the leftists tried to manipulate the public with the traditional media. Trump page’s views decrease of 45% is a chilling reminder of what is at stake.

Lastly, Twitter; which, whilst in my eyes less important than the first two, is still an extremely powerful vehicle for the dissemination of alternative (that is: truthful and ptopaganda-free) news.

Those three together are the greatest threat to modern freedoms, not only in the US but everywhere in the West.

The solution, as I see it, does not lie in bureaucratic regulation of giant news monopolies ( a regulation easily; nay, unavoidably abused by the powers that be), but in the demolition and dismemberment of those very monopolies or quasi monopolies, creating true competition in the market and thus making it impossible for a single dominant provider to exploit its position of dominance for political purposes.

The moment to start this process is now, and the process should be helped by the traditional media, themselves feeling threatened by the new communication gateways.

No Democratic POTUS will ever drive such legislative initiatives; on the contrary, any such is likely to drive an illiberal process of truth suppression and information control.

I hope that President Trump is slowly realising the danger to democracy of these three quasi-monopolies and will, in time, lead the drive to legislative reforms breaking these dangerous cancers in the body of Western freedom.

International Day Of … Well, Let’s Talk About It!

Today is the day that feminists the world over use to push their agenda.

If you ask me, we have allowed this to go on for too long, and we should start responding to the fire from the enemy line.

Who can, after all, be against mothers?

You are not wifephobic, surely?

Hey, don’t look at me that way. In a world were the most miserable people on the Planet call themselves “gay” I can call the 8 March the “International Day Of Devout And Submissive Women” all day long.

In case you had any doubts about the inclinations and attitude of Father James Martin, Society Of Homos, this blog post should remove it fast.

Has a worse priest than this disgusting individual ever existed? Possibly not.

Every day in which this minion of Satan is not defrocked is a shame for the Church.

I don’t know who the bishop in charge of him is, but I dread to think of what must go on in that depraved soul. 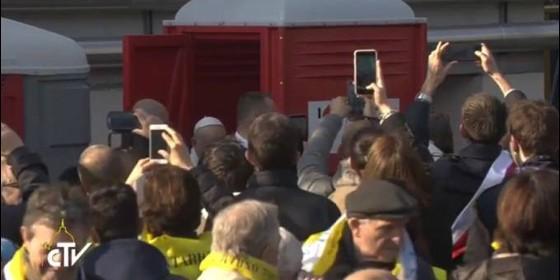 How I love those pictures that say everything without a single word!

Shabby Pope is here pictured in the act of going out of a Porta Potty in Milan, whilst the present (including, no doubt, professional photographers) are snapping like there is no tomorrow.

This would make for a couple of nice headlines: “Porta Pope”, “The Humble Shitter” and “Pope Humbly Piddles In Front Of Cameras” come to mind.

After which, the Humble Shitter was flown back to his entire floor of a quite nice Hotel.

The hypocrisy is so strong in this one that he does not see the contradiction between these empty gestures of “humbleness” and his splendid life.

Almost as strong as the hypocrisy is the vanity: the old lewd man is so eager to make a headline that he does not hesitate to literally piddle (or faking a piddle) in front of the cameras. This…