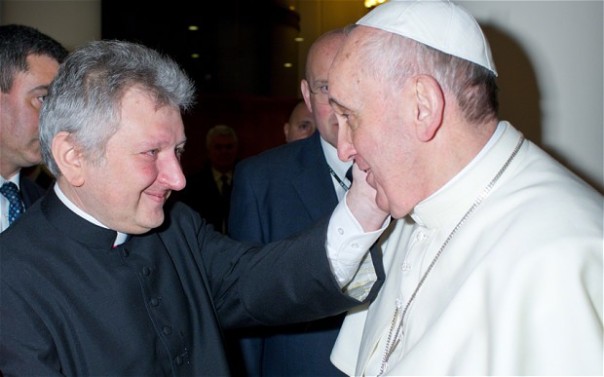 Pope Francis knew about Zanchetta’s proclivities and acts way before the Vatican admissions.

The scoop is from the Associated Press, and the source has forename and surname:  it is no other than Rev. Juan Jose Manzano, the vicar general of Zanchetta when the latter was bishop in Oran.

The Vatican story was that Zanchetta was persuaded to resign because of his “authoritarian style”, and that they wer einformed about Zanchetta’s abuse o fseminarians and general homo behaviour only at the end of 2018; after, that is, not only his time as a bishop, but also his appointment as the number 2 of APSA, the office that manages the (substantial) real estate of the Vatican.

From the article: “While the Vatican’s annual yearbook lists Zanchetta hierarchically as the top deputy to the APSA president, his exact duties were never clear since the job didn’t previously exist”. Go figure.

So, did Zanchetta resign because his “authoritarian” style was considered not compatible with the “field hospital”? Poppycock, says the Reverend. The Vatican was informed in detail in 2015 the first time and in 2017 the second time. Both times, note, before Zanchetta’s appointment to the new Roman office, very near to Francis’ compassionate heart.

The 2015 attempt to get rid of Zanchetta basically failed. In 2017, with the situation even worse, a new attempt was started, and this time the man in charge was the No. 2 of the Apostolic Nunciature, Monsignor Vincenzo Turturro.

Turturro clearly doesn’t idle about, and takes care that the people responsible know in such a way that they cannot avoid to act.  As a result, Francis summons Zanchetta in Rome, and he announces his decision to resign for health reasons. How on earth can it be believed that Francis still knew nothing?

Now consider this: Reverend Manzano either does not want to be “Vigano’ed”, or he truly is one of those naive V II Pollyannas. He states that Francis is “a victim of Zanchetta’s manipulation”.

“There was never any intent to hide anything. There was never any intent of the Holy Father to defend him against anything,” says the Reverend. However, this is patently absurd. Zanchetta was forced to resign in 2017 after the first 2015 attempt failed. Even naked selfies were produced as evidence against him. It is completely unrealistic to assume for a moment that mid-2017 at the latest Francis did not know of Zanchetta’s proclivities.

You know, and I know, and everybody knows, that he knew’ he knew, and did not care for anything else but to save appearances first and let his guy reemerge with a cushioned job some time later.

The easiness with which this man not only surrounds himself with sodomites, but gives them positions of power within the Vatican, clearly signalling to everyone that they are his special protegees, is nothing less than staggering even for a man so deprived of shame like this one.

We have a Pope who chooses to live under the roof of a notorious homosexual and gives him a very lucrative job in the Vatican Bank; then promotes another sodomite to another very prestigious position within the Vatican; another, whom Bergoglio himself apparently considered a kind of “spiritual son”, and promoted to Bishop.

This, among the several other priests he receives in the Vatican and shields in various ways, even if they do not get the jobs he gave to Ricca and Zanchetta.

Francis is the best friend of the enemies of Francis. Already in his tenure in Rome he must have made so many mistakes that, when the whistle blowing begins in seriousness, he will be atomised. What happens if investigations extend to his tenure in Buenos Aires I do not even want to think.

This man is demolishing himself all of his own. Because he is not only evil, but also very stupid.