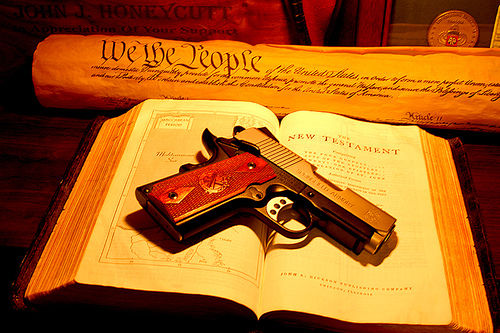 Freedom is God-given. This elementary truth, so ingrained in the psyche of right thinking Americans, has an obvious corollary, that is too often neglected in repressive Europe: the freedom to have weapons (particularly: guns) to defend both oneself and one’s loved ones, and that god-given freedom itself.

Leftists want a controlled society, a society in which freedom is limited to what the Lefties themselves consider appropriate for their subjects. It is no surprise that this would become, as it unavoidably has to, limitation of the right to speak your mind. It is even more evident that what is at the very root of freedom, the ability to actually defend it, will be targeted first.

The whoring singer (and she is a bad singer at that) who offends the name of the Blessed Virgin for her stage antics has just finished to give a concert for the conclusion of that series of promotions of depravity that they called pride month, or something like that.

Unsurprisingly, gun control featured heavily in her promotion of perversion.

It really is one and the same: hate God, hate freedoms, hate guns.

Anti Gun is anti God. If Lefties don’t understand it, they feel it, instinctively. Their rebellion to a superior order and their desire to substitute it for a man-made control nightmare must perforce go through the suppression of the God-given freedoms that underpin not only society, but religious thinking itself. Man-made wannabe utopias never have place for God; either officially so (as in all Communist dictatorships) or as a fake one produced for the use of the oppressors, like the Goddess Reason or the Nazi mystique inspired by Pre-Christian beliefs.

Think of this whenever you read of some deranged whore promoting her man-made, childish, freakish, total control utopia, where the Helotes are kept – for their own good, of course – at a short leash by the enlightened minority of progressive minds who take drugs, become alcoholic, indulge in all sorts of perversion and, in more than some cases, commit suicide.