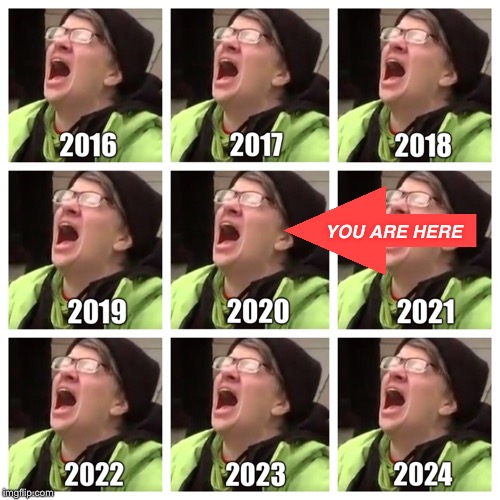 The employment data for June are out. Alas, they are very bad news for the Democrats. At this pace, I think by the end of October things will look fine indeed.

The Dems will certainly not allow this. Economic recovery is pure poison for them. Their plan has obviously been, for months now, to create vast economic misery staying in the way of Trump’s reelection. We know they don’t care about the Country. What will they do?

I think they will try the following:

Expect more space given to a man who wasn’t shy of attention one day in his life. Fauci will tell us that things are going to get very bad, unless Governors castrate the economy again. This time, he will have a much more difficult job. Peter and the Wolf come to mind. There might be local closures for a while, but as a whole, I would say that Republicans states have had enough.

Dems will keep pushing the rioting, burning, and disrupting of the economy. They will say J-J-J-Justice is more important than the economy. Plus, all those people around will spread the virus in its last legs, helping them to push more Fauci-ism down your throat. I think they will avoid Autonomous Zones this time; but the more Molotov cocktails, the better. It will be, as always, Trump’s fault.

Expect more rubbish from the MSMs and the “polling agencies”. Biden in front 14%, 15%, 34%, 71%. Trump at 3% or so probability of victory. “Unnamed” discouraged Republican representatives (very likely, Mitt Romney). Trump possibly resigning before the election (this I have really read a week or so ago! I had to check the date to make sure it was not written just after the tape…. It was not!). There is really no limit to the shamelessness of these people. But it makes them look good with their Facebook friends, you see….

Relentless insults at Trump. Accusations of racism, white Supremacism, robbing of old women, and slaughtering of cute kitten. “Fine people hoax” like there is no tomorrow. If all else fails, screaming like that ugly woman (if such it was) at his inauguration.

Mind, I think they will fail.

But they will try. They don’t mind what kind of damage they inflict on their Country.

Getting rid of Trump is the only thing they care for.

Dyke Against Dyke, Or: CHAZ/CHOP Gets The Chop

Alas, the Summer Of Love That never Was ended yesterday.

The immense embarrassment caused by a violent occupation, which an incompetent Mayor tried to smuggle as a potential “summer of love”, had to fail in the estimation of any thinking person; but Democrats tend not to think too much, and to worry tomorrow for the chaos they allow today.

The now defunct CHAZ/CHOP gave millions of thinking Americans a foretaste of the future those fat Marxist dykes at BLM are preparing for them. Bullying, harassment, Liberia-level street violence, criminality infiltration, lawlessness in every possible form (the numberless cars were conspicuously noted, but they are of little consequence when compared to a bunch of people, headed by a self-appointed warlord, deciding they would keep the order! And no, this was most certainly not a militia! This was the reason why militias exist in the first place!).

Even admitting this would be possible, no one ever decided, through democratic elections, the erection of the Autonomous Anarcho-Communist Zone. The police was not allowed in, or obstacles were posed to them, even after shooting and murder had occurred. The anarcho-communists blocked the ways in and out, posing intolerable limitations to the most elementary freedoms for the inhabitants of the zone. What kind of other criminal behaviour went on we will largely never know, but I am pretty sure the little that will soon emerge will give a lot of people pause.

This was, from the start, a total failure waiting to happen, and a great help to Trump’s reelection effort. A help made possible by the myopia and outright stupidity of the Democrat echelons, who failed to recognise the immense potential for damage for them, preferring to appease the mob and get the applause for one afternoon. They are in bed with their lesbians enemies now, because they think the Charge Of The Fat Dykes will help them to defeat Trump. Fools.

In the next days, I will read with great amusement the pathetic attempts of Mayor “Summer Of Love” Durkan to apportion the fault for this catastrophe, which she fully owns, to others; and the more she speaks, the more she will help our cause. She will also likely have more problems: if the protests continue she will look extremely bad after looking very bad. That will be, also, fun to watch.

In short: she is in a very deep hole, and she keeps digging.

A mayor not only surrendering a part of the city she administers to the mob, but calling this debacle “experiment” and “potential summer of love” is not worthy of having any responsibility whatsoever, not in politics and not in any other job. Who would allow her to run a stationery shop? She would give away all the articles, and call it marketing.

Jenny Durkan is the walking, talking (not thinking) evidence that if you can’t do anything well in life, you should become a politician.

Oh, and I just discovered she is another dyke, too.

Might explain why she liked BLM so much, before discovering how stupid she is.