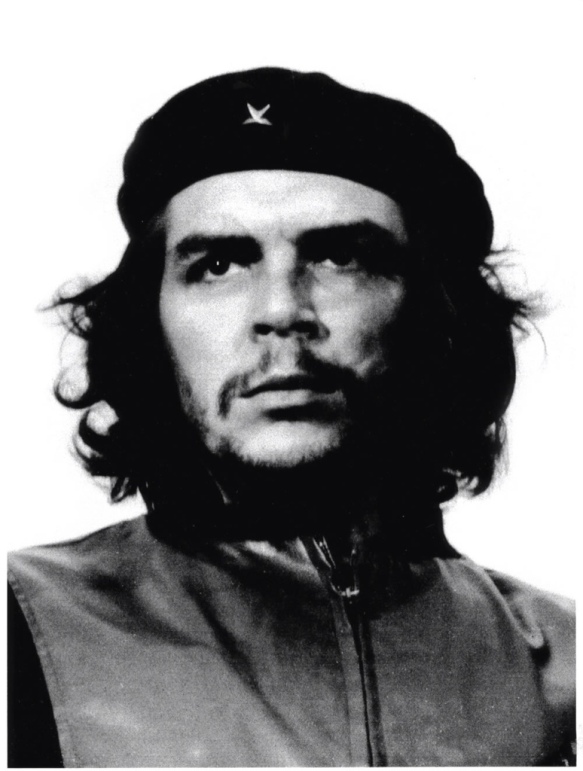 The Pope and the President discovered they have much ground in common.

The White House has recently announced on 27 March Obama will meet the Bishop of Rome to “explore inequalities”. Already this statement allows you to know beforehand what is going to happen: a rhetorical contrapunct in which the two melodies (the secular populism and baby-killing rage of Obama, and the secular populism with a thin varnish of Catholicism and “who am I to judge” rage of the Bishop) will intertwine to create a complex Socialist sound meant to please the envious, the losers, the lazy, the illegals and the reprobates of all kind the world over.

There is, of course, the small difficulty that Obama is exactly the contrary of what a Catholic should stand for; but if you reflect that Francis is almost exactly the contrary of what a Pope should be you realise this small difficulty will be easily overcome. In the “run with the hare and hunt with the hound” style that has become a mark of his inglorious pontificate, Francis will let the world know he has decided to “focus” on some “burning” issues he “shares” with the President, whilst the real issues – the one of the most inhumane, Nazi abortionist anti-Catholic pro-faggotry bastard even to darken the doors of the White House to mention only one – will be conveniently toned down to the point of inaudibility.

Perhaps we will be informed – at some point, when the hype is gone – that Francis has expressed some “concern” about the HHS mandate; we might be told that Francis has “mentioned” abortion with Obama; we could be reminded that the Pope is – or so he says – Catholic. But make no mistake: none of this will introduce any cacophony to the sugary sounding contrapunct mentioned above.

This feast of global rhetoric is what will make the real headlines, helping both men to become more popular among their common chosen audience – those who don't give a Barack for God in general, and Catholicism in particular -. At the same time, the little and softly whispered sounds of obligatory disagreement between the two will be generously fed to the Catholic press and blogdom, with the inevitable wave of Pollyanna-style articles and blog post along the lines of “Is Pope Francis Just Another Socialist Nutcase? Eleven Things To Know And Share”. The army of Pollyannas among the readers, ready to believe everything that helps them to continue their cosy, comfortable dream of the orthodox Papacy, will as always swallow it whole, and will as always come back asking for more.

A bit more difficulties might, though, those bloggers and journalist encounter who have made of systematic – and very laudable – attacks to Obama a mainstay of their publishing activity. They will have to make an extra effort to persuade their audience that the North-American Marx and the South-American Che Guevara are really that different. Kind of embarrassing,

You might then say that this is, in the end, nothing very new: Popes have met US Presidents before, and Pope Benedict has also met the very same Barry Boy in the past. The reasons of diplomacy, and all that. I reply to this that this meeting promises to be nothing of the sort, and the respectful but very clear mention of the differences will make place for a huge “equality fest”, by which differences will be brutally downplayed and the two men will help each other in establishing their own position as the popular icons of the first half of this century.

I might be wrong, of course, and suddenly Francis might discover a strong antagonism to abortion, the undermining of Christian values, and the forced redistribution attitude. Forgive me for being skeptical about that, having noticed that Francis talks about abortion the strict indispensable and as much in a whisper as he can, has done nothing – besides making stupid and offensive jokes – about the homo infiltrations in the Vatican, is a public protector of sodomites in his own entourage, is a great buddy of the one who wants to persecute Catholics for their faith, and loves playing Che.

I can already imagine the photos of the two, and the huge mediatic circus the press will make of the “hope and change” President and the “who am I to judge” Pope.

“United Against Poverty And Homophobia”.

I can already imagine it, and it truly makes me sick. 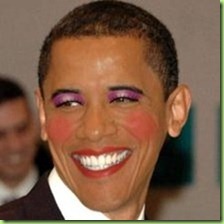 The Honorary Queen of the United States.

The only way out of a homosexual lifestyle, the only way out of a relationship that has been ingrained over years of time, is through the healing power of Jesus. . . . We’ve got to say the homosexuals, the same thing that I say to you and that you would say to me . . . it’s not easy to change, but it is possible to change.

From the Ricochet: these are words pronounced many years ago by a Protestant pastor in Atlanta.

The very same pastor had been selected to give the benediction at President BO’s inauguration.

That is, he was selected before it turned out he had pronounced the words.

Having discovered the pastor is a Christian, the Obama people promptly proceeded to remove him and replace him with, surely, a wimpy heathen.

The White House puts it this way:

Choosing an affirming and fair-minded voice as his replacement would be in keeping with the tone the president wants to set for his inaugural …
As we now work to select someone to deliver the benediction, we will ensure their beliefs reflect this administration’s vision of inclusion and acceptance for all Americans.

These people can’t stand even a vague smell of Christian thinking. Not even when a pastor is concerned.

They are on their way to obliterate every trace of Christianity from public life and substitute it for their heathenish religion of “inclusiveness” (very popular in Sodom) and “acceptance” (a hit in Gomorrah).

The First Gay President Is In Trouble 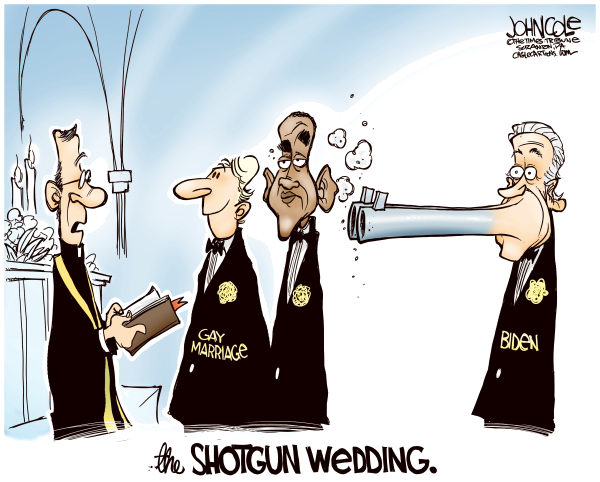 Marriage supporters in Maryland have announced they have gathered more than double the signatures required to place a new law legalising and institutionalising sodomy and same-sex perversion before the people.

The vote will apparently take place in… November, together with the Presidential election.

Maryland has almost 6 million inhabitants, and 30% of them are black. It won’t be an easy time for many of them, as a Presidential campaign increasingly  focused on social/religious issues puts them more and more violently in front of the clear heathenism of their candidate.

Of course, it is not that Obama’s “coming out” will immediately alienate him “the Black vote”; but it will certainly make it more difficult for his traditional supporters to follow him. If even one in thirty abandons him it will be a big blow; if it is one in ten or twelve he will probably not survive it. By choosing – or possibly: after being forced by Biden’s stupidity – to alienate the moderate electorate, Obama is staking everything on a massive mobilisation of the minorities (particularly blacks) and angry fringes (sodomites, lesbians, child rapists, dog rapists, coprophagists, and their friends and supporters).

It seems very difficult to me that the strategy may work, and I struggle to think of a democratic President who fled to the left and was greeted there by enthusiastic multitudes securing reelection.I notice, on the other hand, that this brand of hard liberalism never secured Ted Kennedy a nomination, and when McGovern and Mondale were chosen to represent “change” they were more or less mercilessly filleted by Nixon and the Gipper respectively. Life at the left border of the political spectrum seems to be short and ending in painful death, at least if you want to become or remain President.

Of course, Obama will not lose in Maryland, as even Kerry was able to easily win the State in 2004 and Obama himself won in a landslide in 2008. But he is making it more and more difficult for him to win the race, and  considering 10 of 16 key battleground states have passed amendments to protect marriage I think Barack Hussein is making his job as difficult as possible. I can’t imagine this to be the result of a cold calculation, rather of a necessity created by the insistent flirting with extreme positions, coupled with the immense stupidity of the VP.

Comments Off on The First Gay President Is In Trouble