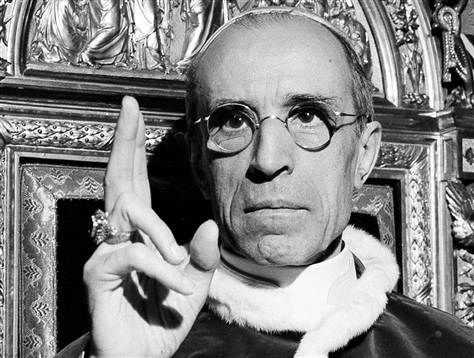 It is very well-known that Pope Pius XII, Pastor Angelicus, was a great supporter of the Fatima apparitions; so much so, that one of the names with which he is remembered is the Pope of Fatima.

An important issue of the Fatima apparitions is the great importance put by Our Blessed Virgin on the daily recitation of the Rosary. It is therefore no surprise that this great Pope would at some point address the importance of the rosary in an encyclical letter.

It is particularly indicative that this happened in 1951, in the middle of the Cold War. The Holy Father chose the day of the Feast of the Seven Sorrows of the Virgin Mary, the 15th September, to address the entire Catholic world with Ingruentium Malorum.

Let us see some of the – in my eyes – most relevant and instructive passages of this work.

We well know the Rosary’s powerful efficacy to obtain the maternal aid of the Virgin. By no means is there only one way to pray to obtain this aid. However, We consider the Holy Rosary the most convenient and most fruitful means, as is clearly suggested by the very origin of this practice, heavenly rather than human, and by its nature.

The most convenient and the most fruitful means. This is an important reminder both of the power of the Rosary (that Padre Pio didn’t hesitate in calling “weapon”) and his “convenience”. What this holy Pope means by this is explained a bit later, when he says that through the Rosary

[….all, even the most simple and least educated, have in this a prompt and easy way to nourish and preserve their own faith.]

The Rosary is so beautifully simple, that everyone can profit from it, no matter how simple or uneducated. This simplicity is one of his greatest beauties, because it makes it so accessible.

The simple structure of the Rosary is also extolled by the Pastor Angelicus from a different angle, namely that:

The recitation of identical formulas repeated so many times, rather than rendering the prayer sterile and boring, has on the contrary the admirable quality of infusing confidence in him who prays and brings to bear a gentle compulsion on the motherly Heart of Mary.

This is not a new form of prayer (think of the endless affirmations and repetition of sacred words used in the Eastern religions), but it is a point that is still not less valid and also followed by the most elementary common sense and by the wisdom of the ages: repetita iuvant.

How does it work, concretely? The Holy Father writes beautifully about this that:

from the frequent meditation on the Mysteries, the soul little by little and imperceptibly draws and absorbs the virtues they contain, and is wondrously enkindled with a longing for things immortal, and becomes strongly and easily impelled to follow the path which Christ Himself and His Mother have followed.

Little by little, imperceptibly. One doesn’t have to expect miracles from the Rosary (or from any other form of prayer or devotion, by the way). Praying the Rosary is the work of a lifetime, not a specific event with a before and an after. It is like the habit of living a healthy life, not the injection which cures the disease. I would say that the The recitation of the Rosary is, in a sense, as much a way of living than it is a way of praying.

So much so, that Pope Pius XII stresses the importance of the recitation of the Rosary in the daily life of the family; he does so with extremely beautiful words:

What a sweet sight – most pleasing to God – when, at eventide, the Christian home resounds with the frequent repetition of praises in honor of the august Queen of Heaven! Then the Rosary, recited in common, assembles before the image of the Virgin, in an admirable union of hearts, the parents and their children, who come back from their daily work. It unites them piously with those absent and those dead. It links all more tightly in a sweet bond of love, with the most Holy Virgin, who, like a loving mother, in the circle of her children, will be there bestowing upon them an abundance of the gifts of concord and family peace.

In this fashion, the Rosary will help both the adults and the children:

This meditation on the Divine Mysteries of the Redemption will teach the adults to live, admiring daily the shining examples of Jesus and Mary, and to draw from these examples comfort in adversity, striving towards those heavenly treasures “where neither thief draws near, nor moth destroys” (Luke 12, 33). This meditation will bring to the knowledge of the little ones the main truths of the Christian Faith, making love for the Redeemer blossom almost spontaneously in their innocent hearts, while, seeing, their parents kneeling before the majesty of God, they will learn from their very early years how great before the throne of God is the value of prayers said in common.

Please note here a point rarely stressed this day, but extremely important in any age: as a child naturally sees in his parents the source of authority, seeing their parents kneeling before the majesty of God will readily impress itself in the child’s receptive mind.

Pope Pius XII spoke to Catholicism during the cold war, with the Communist monster reigning over half of Europe, and threatening the other half. This is what Pope Pius had to say about the way to destroy the evil menace:

We do not hesitate to affirm again publicly that We put great confidence in the Holy Rosary for the healing of evils which afflict our times. Not with force, not with arms, not with human power, but with Divine help obtained through the means of this prayer, strong like David with his sling, the Church undaunted shall be able to confront the infernal enemy, repeating to him the words of the young shepherd: “Thou comest to me with a sword, and a spear, and with a shield; but I come to thee in the name of the Lord of Hosts, the God of armies . . . and all this assembly shall know that the Lord saveth not with sword and spear, for this is his battle, and he will deliver you into our hands” (I Kings 17, 45-47)

“Not with force, not with arms, not with human power” was Communism defeated, but with the determination of staunchly Christian people (Ronald Reagan very probably the most important single person); the prayer of millions of Christians and, of course, countless shoots from that most powerful weapon, the Rosary.

This great Pope had the misfortune to become Pope in the most grievous of times, and to have to absolve his role in possibly the most dangerous situation a Pope personally – and Catholicism collectively – were ever called to confront.

It will be a comfort to you to know that the Rosary was always in his mind and in his prayers.