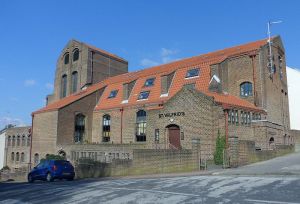 Ugly, I know; but it used to be a church. Now it hosts sheltered housing: the former St Wilfrid’s church, Brighton.

In England you see them, if you pay just a bit of attention, everywhere: former churches.

Big and small, with or without bell tower, monumental or demure. They are transformed in cottages, flats, community spaces. At times the original purpose of the building is evident,mother times it is more or less heavily disguised. But they all tell the same story: here used to gather a Christian community, that has now vanished. Very many of these churches are, from what I can see, Protestant.

Do not delude yourself into thinking that the community has now enlarged, and has moved into bigger premises. They have just vanished as the old generation went to its judgment, and the new did not believe in any judgment not delivered by a television “jury”.

Last time I looked, Sunday church attendance for the so-called Church of England was at 3%. This number alone says it all. The official 25 or more million Anglicans in the country are, officially, a joke, and among the Methodists it’s even worse.

Where the official count says that there should be millions of Christians, there is a huge hole, filled with nothing. Or better said, filled with senseless do-gooders living in a world of easy emotions, and fully persuaded of their own heathenish goodness.

They run “against this”, cycle “against that”, jog “against that others”. They make clown of themselves, as if there were any merit, let alone dignity, in that. They wear red noses or pink bras (as men; yes, they do) and think they are “making a difference”.

They aren’t. Firstly and less importantly, they aren’t because taxpayer-funded (directly or indirectly) or corporate-funded medical research vastly exceeds do-goodism by any standard you would care to find in almost every sector of medical research, and certainly in the basic research. But it’s not even a  matter of numbers. It is (secondly, but most importantly) that a human life is infinitely short compared to an eternity in hell. Therefore, to everyone who lands in hell his having died at 72 or 88 is, to all logical and mathematical purposes, infinitely small and therefore infinitesimally irrelevant.

More and more of these people around.

Is, then, not good to spend money on research? Yes, it is. But don’t make of it a religion, because there are things infinitely more important than when one dies, and for which almost no one cares anymore. Like, say, not going to hell. And for heaven’s sake, stop putting yourself at the crossroads with your freaking pink bra, like a Pharisee on cocaine.

The left hand must not know what the right hand does. If you went to church, you would know it. And no. You aren’t needed. Or do you think you can add one cubit unto your stature?

All this is ignored. As churches are transformed into town halls and flats for “modern living”, or in building for a variety of other purposes, “charitable” organisations multiply, and you see all these people – the children and grand-children of those who once would sit in the pews on a Sunday morning – running and cycling, sweating and panting, rowing and skating; all of them with the t-shirt saying to the world how good they are; all of them obsessed with lives ill-spent going on for as long as they can, and uncaring of what must be the eternal destiny of a scary, scary, scary number of people in XXI Heathen England. A country full of people so good, that God to them is a tale, an afterthought, or something for which they have really no time…

As the churches vanish and bells are hears less and less frequently on a Sunday red noses, pink bras and sundry “look at how good I am” t-shirts are everywhere. The old generations were Proddies; but they were Proddies with the fear of the Lord, and an often sincere – if always misguided – intention to live a Christian life, and to die a Christian death. What a difference to today.

Some years ago, the host of the popular UK TV show “Grand Designs”, dealing with the transformation of an old church in a house, said on TV “look, the Lord’s Prayer is on the wall!” as the camera proceeded to zoom on the wall in question.

It was the Creed.

This TV isn’t live. It is carefully edited, and made to a rather high standard. We do not know whether there was, somewhere else, really the Lord’s prayer. But the Creed simply isn’t the Lord’s prayer. Still, No one seems to have noticed.

The basics have gone. Christianity is rapidly fading away even as a mainstream religious flavour. Churches become apartments, or houses, or something else, or are knocked down. Bells are heard less and less frequently.

Boy, how they feel proud.

Although I’ve struggled to work out exactly what my faith is, I have always tried to live by the doctrines of Jesus. It’s not rocket science: be kind, be thoughtful, be respectful, don’t hurt or judge other people. If anyone has a better blueprint for getting through life, I haven’t heard it yet.

Tony Jordan, writer of BBC1’s Eastenders, Hustle and The Nativity

I have found this quotation on a rather strange, more than vaguely disquieting page about which I might write separately.

Unsurprisingly, a BBC writer manages to tell us in two lines everything that is wrong with himself and his ilk. We live in such stupid times that people who are supposed to be fairly well-educated show a lack of basic understanding of simple things that would have embarrassed an illiterate peasant of the late XIX century.  And the embarrassment would have been fully justified, as the above mentioned illiterate peasant would have been much better educated in what really counts than the nincompoop from whom the quotation is taken.

Let us take all the components of this astonishingly stupid statement, so that the abyss of arrogance and ignorance it contains may be fully revealed.

1) “I have struggled to work out exactly what my faith is”.

This is so BBC it’s embarrassing. One is supposed to “work out what his faith is”. Hhhmm, let me see, what should my faith be? Perhaps a buddhist base with added Hinduism would do the trick? I might add a topping or two perhaps, like Confucianism and some Yoga; a helping of Kabbala might be interesting, and let us not forget Islam and (how is it called? o yes..) Christianity in order to be inclusive…

Seriously: even a child would – provided he is smart – know that before one talks about faith one should have an idea of what a faith is about: not something you work out yourself, but a system of religious values you adhere to. Otherwise it is not faith (whether a true or a false one), but merely a form of self-worship which, besides being utterly vapid, will most certainly be self-contradictory.

2) “I have always tried to live by the doctrine of Jesus”.

Here it gets really funny. Notice “the doctrines of Jesus” are separated from the concept of Christianity as faith (he is “struggling”, remember? “Working out”…); Jesus is that nice chap who seems to have doctrines which seem to, in a way, be in agreement with the moral values of the chap; hey, if he agrees with Jesus, Jesus can’t be wrong, can he now…. One starts to understand this man has no clue about Jesus, Christianity, or anything else… This is amply demonstrated by the following statement.

3)  “It’s not rocket science: be kind, be thoughtful, be respectful, don’t hurt or judge other people”.

If I were to teach the fundamentals of Christianity to a class of morons, I would feel obliged to make it, erm, rather more complicated than that, and I am sure the morons would fully follow and digest the lesson. But this here is something which you might, if it were right, explain to a five-years-old. I know, it isn’t even right. But heavens, a person can’t claim to be happy with such a level of childish, extremely superficial thinking and call himself an adult, surely?

He is, of course, entirely wrong. If there’s something that can be said of the statement above, is that in it Christianity is largely non-existent, or openly denied. “Be nice, and allow everyone to do everything he pleases” is the purest antithesis to everything Christianity stands for. No Commandments, no hell, no heaven, no proselytism, no fear of the Lord; no original sin, redemption, real charity, system of Christian values, or church of any kind to be seen; besides, no reason why Jesus would have come on earth in the first place, no sign he would be in any way better than a very fine chap, & Co., & Co. Nothing of nothing.

A nicely sounding nothingness is what this man has, after his “struggle”, “worked out” for himself.  I can tell you with absolute certainty that in kindergarten I was instructed better than that, and both my class comrades and I would have laughed at such a statement; but again, the man works for the BBC, so do not expect any sense in what he says…

4) “If anyone has a better blueprint for getting through life, I haven’t heard it yet”.

This is a declaration of intellectual – besides moral – bankruptcy as I have seldom read anywhere. Clearly, this man “struggled” so much that he has never bothered, whilst “working out” what kind of religion he should build for himself, to read a Catechism, or even a Protestant book of introduction to Christianity for Children if he wanted to have the message accessible to him. His statement makes the impression of one who has “worked out” his religion by talking to other miracles of moral vacuity at cocktail parties, and has at the end decided humanity cannot have made better than his effort. Seriously, read it again.

Now, that there are people like that is not new. What is typical of this generation is that such statements and such mentality is mistaken for, in a way, wisdom, or – if this is too big a word for the age of the X-factor – at least for some kind of thoughtfulness. Astonishing.

A recent survey indicated almost 60% of the Britons still defines themselves as “Christians”. If the likes of Mr Jordan include themselves among them, we are in really bad shape.