Evil, Genocidal Communist Bastard Undeservedly Dies In His Bed And Meets His Maker. Catholics Say A Prayer For His Soul.

The news of the death of one of the most despicable bastards ever to disgrace the face of the disgraceful XX Century (and a part of the XXI) reached me this morning. Suddenly, it was clear why the air seemed somewhat cleaner and fresher.

As the tributes to the Evil Communist Bastard pour in (our own Commie in Chief, Jeremy Corbyn, has just vomited his own praise) I think it is very fitting to remind every Catholic of a brutal truth of life: when a pig dies it does not become a lamb. It becomes pork.

Fidel Castro was an evil man by every imaginable standard, and he was an evil man to the very end. There is no trace in his public interventions (which continued to appear, sporadically, almost to his very end) that he saw the light, though he did not hesitate in taking Catholicism hostage for his own ends (like another man who amply deserves the same adjectives in the title, without “genocidal”). The probability that Satan had a special Welcome Committee for his new guest is very high.

We Catholics do not forget, not even on this day – least of all on this day – the dastadly acts of the bastard. We do not indulge in effeminate “forgive and forget”. We counter react to the praises that will be poured on the Bastard from all over the planet. We call a pig a pig, and a dead pig pork. We don’t shut up just because the pork has finally gone to his judgment. We know that, it life were fair, Fidel Castro would have been ignominiously executed a long time ago, instead of dying in his bed.

Still, as Catholics we know that even the soul of an evil bastard like Fidel Castro has infinite value. We know that the Lord (antecedently) desired the salvation of even the likes of him. We know that his poor Guardian Angel made every attempt, to the very end, to save his soul.

We know – and, as Catholics, we must hope for him – that God’s Mercy can be tapped on until the very end; the thought that this evil bastard might have repented in the end and merited Purgatory should inspire in us a sentiment of hope, and should make us rejoice. It should, also, be for us a reason for moderate optimism, letting us reflect that if God pleased to save such a one the probabilities for us, average wretched sinners, might be a tad better than we thought.

One Castro dealt with, one to go.

One day, every bastard must die.

Who am I to judge, you damned Catholics?

Why is Francis flying to another Continent?

In order to preach to others not to cause CO2 emissions with things like, erm, flying. He also wants to promote his favourite political agenda: Peronism.

Flying over an ocean with his entire entourage. Isn't this hypocritical?

Yes, it is. But Francis lives in a shame-free zone in which reason, coherence, or even basic sense of decency are not allowed to enter. And he also is, let us say it, rather stupid.

Why did Francis also visit Cuba?

Officially, because it's a Catholic Country. Unofficially, in order to boost the local Communist regime, which persecuted Catholics and destroyed everything than could be destroyed for more than half a century. But they hate Capitalism, like him.

But is a Pope not supposed to be critical of Communism?

A normal Pope, yes. A faithless Peronist who chose religious life in order to scrounge a comfortable and privileged existence, no.

What else did Pope Francis do in Cuba?

He talked, as always, a lot of nonsense. He went so far as to say that it is good that there is dissent and division within the Church. The usual rubbish, on steroids.

Why would he say that?

Because he is evil and, as already stated, stupid to boot. He wants to undermine Church teaching with his Modernist or outright secular rubbish, but being the ass he is he can't go at it with any subtlety. This is why nowadays even big traditional outlets mock him.

What will Francis do in the United States?

Officially, he will take part in some World Catholic gathering or other, of the kind which makes stupid girls of stupid parents pregnant. Unofficially, he clearly wants to boost Obama's socialist, environ-mentalist and homosexualist agenda. It is his agenda, too, so it makes sense.

Why do you say that?

Because of the rubbish the man has been producing from his Peronist mouth since records began. There is truly no reason to believe he will change his tune now. Mind, he will hint at a Catholic thing or two. This will appease the Pollyannas and delight the assorted groupies.

What else do I need to know?

He will attend a reception at which Obama has invited all sorts of perverts, dissenters, and outright enemies of the Church. Of course he could have prevented this, but he clearly didn't. He wants to spread his own anti-Gospel.

No, it will not work. He couldn't even fill the hotel rooms, no matter how cheap. People are starting to see through him. The novelty effect has disappeared, and he now looks like yesteryear's reality show hero.

Perhaps I should seize a middle-sized Country with violence.

Have tens of thousand executed.

Deprive everyone of everything they have.

Destroy the economy to the ground.

Then, Francis would like me, and praise me as much as he can.

Comments Off on Just Sayin’

Soon in a church near you.

With all this, I find it utterly despicable that some Cubans would play “Occupy” at the expense of sacred buildings, with a Tabernacle inside them.

This happened in Cuba in the last days, and in various degrees in more than one location. You can read the details here. The Holy Father is visiting in September, but no political grievance – no matter how justified – can be taken as an excuse for not only disrupting church life, but taking sacred buildings as hostages of one’s own grievances.

Truly, it seems that the mentality of modern times – that as long as I have some grievance I can feel authorised to do whatever I please – is not halting even in front of the altar.

This is one of those days when we Catholics are allowed to get a bit of a perspective; not intellectually – we know that already- but in a more emotional way.

As the communist regime in Cuba is waiting for the Castros – and very possibly only one of them, though I can’t say I wish the second a long life – to kick the bucket to follow them soon after in an inglorious grave, for the first time in 60 years a Catholic procession celebrating the island’s patron Saint has taken place.

It is a bit as if the Castros’ regime were dying in installment or, if you prefer the image, were being eaten by worms little by little, its body in advanced state of decomposition whilst its heart is still beating, someway.

Or you can put it in a different way still: that the stench of the decomposition of the Castros’ regime is being covered by the fragrance of the True Faith, re-emerging in the open to make clear that you can suffocate Truth for a while or even for longer, but in the end you can’t kill it, and you can’t avoid its re-emerging one day.

I suggest to those who haven’t done it yet to watch the beautiful Andy Garcia’s The Lost City.

Or if you like, you might celebrate the day with the wonderful anti-Castroite song fruit of the genius of Donald Fagen, The Goodbye Look.

The Hospital and the Priest 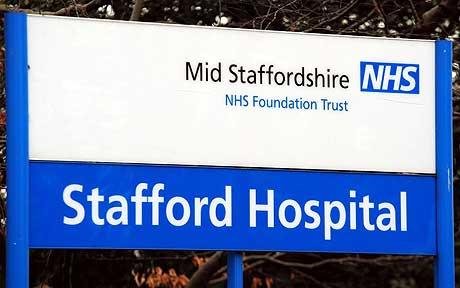 In case you think that Catholic priests are dangerous for your child....

Please look at this Guardian article. It deals with the rather shocking episode of a hospital in which, through massive failing at all levels (and, more importantly, failing to correct what was clearly going wrong), more than one thousand people “died of preventable causes”.

Now this is an NHS hospital and public health care is one of the pets of the secular left anywhere from Cuba to London. This might be the reason why the tone of the article is so, well, clinical. So calm. So absolutely dry.

Notice that there is no generalisation here, no process to entire institutions. The existence of the NHS is not called into question. The morality of doctors or nurses as a body is not criticised. It is about making things better, isn’t it…

Also please notice that the scandal here is multi-faceted, as it appears that executives of the relevant NHS were subsequently hired in very well paid quango jobs, of which Labour seemed to have an inexhaustible, ever-expanding reserve. Therefore we have all the ingredients here: a) obvious mistakes on the ground; b) people in the know who have no guts to open their mouth; c) controllers who fail to control; d) when the scandal erupts, hierarchies who protect those who are involved and move them to other, comfortable positions. The similarities with the (homosexual) pedophile priest scandal are therefore remarkable, the biggest difference being that the number of the dead is vastly superior in the case of the hospital.

What is very different, is how the leftist press reacts. The savage attack not only to single priests, but to the priesthood as profession has no parallel here. We see no attacks to the profession of medical doctor, or nurse. Very strange, because in the case of the Staffordshire enquiry the failings to report the conditions of the hospital seem to have been generalised. Many knew, no one has spoken, people continued to just die.

In addition, it is clear here that there was a clear failing of control mechanisms on a grand scale, for several years. Look, I must have heard this already. Then why there is no condemnation of the NHS system in its entirety at least vaguely comparable to the lynching of the Vatican? If single cases of bad behaviour and failed oversight are enough to question, say, priest celibacy, why should a massacre of such proportions not be enough to question, say, the existence of a publicly funded healthcare system in the UK?

This the more so, as this expensive giant seems to have contracted all the … diseases of your typical big organisation: big cost, inefficiency, failing oversight, no accountability, inability to admit mistakes, protection of its members no matter what.

In the case of the (homosexual) paedophile priest scandal, many lefties had no problems in accusing the Pope of covering it all. In the case of the Mid-Staffordshire enquire (up to 1200 dead more), the Labour government at the top remained blessedly exempt from demands of PM resignation.

There are many parallels between this scandal and the failings within the Church to properly protect children, put adequate protection mechanisms in place, deal with problems swiftly and efficiently. There are even more parallels in the tendency (typical of every organisation, let us not forget this) to cover failings, avoid scandals, protect and “recycle” some who have paid a higher price and were possibly asked to offer themselves as scapegoats (or perhaps were just better connected). Finally, there are parallels in the ethical questions that it opens about entire categories, when generalised failings are seen by everyone but no one reacts.

What is surprising (or perhaps not, as we talk about secular lefties here) is that for the NHS an entirely different approach is used than the one used against the Church.

1200 children prematurely dead in five years in Catholic schools because of massive failings systematically undetected.
Imagine that, and what would happen.