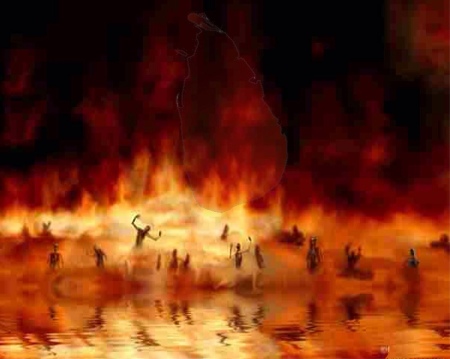 Good and shocking news reach us today from India. The good news is that, certainly going against the trend of at least the stupid, corrupted, utterly amoral West the Indian Supreme Court has de facto reinstated sodomy laws in the country by banning the law that abolished them.

The shocking news is that, of all people, the Indian Cardinal Gracias should complain about it.

We really live in an upside down world. A Cardinal should very well know that a sin is an action (or thought or omission, but here we are interested in the action, and it is the act of sodomy that is a criminal offence, not being an inverted) that offends God, and therefore the Church should approve every action from foreign legislative or judiciary bodies that introduces or upholds punishment for the most atrocious offences, as they align at least in tendency the civil society – even of prevalently non-Christian countries – to Christian values.

This did not happen by chance, of course, but in part thanks to the silence or utter complicity of the clergy, among whom Cardinal Gracias is an egregious example.

One must, in fact, wonder where the Cardinal has left his sense of shame, provided he ever had one. We are talking here of such abominations – akin to the raping of children, or to incest – that up to one and a half generation ago the very fact was only mentioned in the most indirect and least shocking of ways, and only when absolutely necessary. Not so for the good (or rather, bad) Cardinal, who should be asked why he does not intervene in public to defend, say, the decriminalisation of incest among consenting adults.

I note in his very stupid defence of perversion, the Cardinal states that he has “full respect for homosexuals”. He clearly considering sodomy an obvious and inevitable corollary of being a pervert, as the law in question does not punish being homosexual, but merely the act of sodomy. Interesting. The Cardinal should read a catechism when he has time. Or perhaps he should ask that sex with children be decriminalised, as the impulse to sexual acts in child rapists is at least as strong as the one to sodomy by sodomites; this, apart from the fact that not infrequently the child rapist is also homosexual.

Note, though, that Cardinal Gracias is another member of the “gang of eight”, and it appears Francis has carefully handpicked them so that the upside-down-ing of the Church may go on undisturbed. It can also be that nowadays every such “gangbanger” feels he could be the next one in charge, and feels the need to promote his, ahem, “Francis II” credentials. I am being malicious, you say? As Giulio Andreotti used to reply: those who think ill of others commit a sin, but are often right…

As we write the Year of Our Lord 2013, Church prelates all over the world publicly and enthusiastically embrace the values of the secular and perverted society, whilst it is left to the judiciary of foreign countries to uphold the most elementary morality. It truly beggars belief that only 55 years could reduce the Bride of Christ to such a state.

Comments Off on India: Right Judges And Wrong Cardinals.

Egypt has recalled its ambassador to the Vatican after Egypt found itself in the exclusive lists of the countries singles out by the Holy Father for not doing enough to protect Christians (he forgot India and Pakistan, I would say; but perhaps he thought these last two go sans dire).

The Egyptians complain that the security of Christians in Egypt is an internal matter of the Egyptian government. This might well be, but the Pope hasn’t said that he wants to run the Egyptian security policy; he has merely said that they are not doing enough.

I think, though, that a great embarrassment hides behind this uncomfortable reaction. It is not advisable for any government (particularly if relying on massive transfers from the US to stay halfway afloat and last time I looked only Israel received more transfer from the US than Egypt) to be in the black list of the Vatican and to be branded as a country not doing enough to protect Christians. I doubt that even Iran would look without worry to a similar situation but whilst Iran doesn’t have to be worried about the effect on their purse of 70 millions US Catholics, Egypt does.

Let us, then, register this little diplomatic scuffle as a sure sign that the Pope’s move will force the Egyptian government to deal with the matter rather than limiting itself to the usual whining of third world (please substitute this with the politically correct expression) fake democracies (please do it again).

Comments Off on Egyptian Government Angry At Pope For Tellling Truth

No Suttee with Him.

We have examined in the past two posts (here and here) the most common ways to understand reincarnation and their fundamental incompatibility with the existence and work of Christ. Let us now conclude by examining the utter failure of such new age “Christianity-cum-reincarnation” perspectives from a more practical point of view.

In order to do so, one must decide whether Indians are a people intrinsically or even genetically prone to violence and cruelty, or not. If one decides that they are, one subscribes to a racist vision of the world which is the contrary of what modern followers of reincarnation tend to (at least consciously) believe. If one doesn’t, he has a problem.

It is in fact clear from the most superficial exam of the Indian society that a high level of cruelty and ruthlessness, unknown to Christian societies, has dominated its social structures for a long time. The suttee, the habit of burning the widow at or around the death of her husband, is in my eyes a clear evidence of the consequences of reincarnation. I am not interested here in the details of the practice (how consistent it was with Hindu spirituality; whether it was more often voluntary or forced; whether it was common or rare, etc.); rather with the fact that such practices never existed in the Christian culture. And really, whilst one does not necessarily need to believe in reincarnation to commit suicide or being killed (a lot of atheists commit suicide or kill even by us), it is difficult to imagine that such practices would have been even imagined without a belief in reincarnation spread through the veins of the Indian society. The problem here is not whether Suttee is compatible with Hindu spirituality, but whether it is compatible with the belief in reincarnation…..

Similar considerations can be made for other aspects of the Indian society, less evident now but still not eradicated: the existence and toleration of castes by otherwise decent people can only be explained with the belief in reincarnation.

Still, no sensible person could deny that in that same country one could find a multitude of excellent people; compassionate in their own way, lovers of family and friends, sometimes extremely spiritual as clearly showed by an impressive spiritual tradition. It is therefore fair to say that it is the belief in reincarnation which made the cruelty, the suttee, the starving of people under one’s eyes & Co. acceptable in the eyes of decent people. I do not want to say that an individual who believes in reincarnation must perforce accepts these things; rather that a nation that believes in reincarnation will end up accepting them.

The problem of today’s society is that too many people are ready to see as “cool” and “spiritually advanced” everything that comes from the East, but do not think to the end about the consequences of the beliefs they are trying to import. They consider a “cruelty” that a priest (a man who has made an adult and free choice) is not allowed to marry, but never consider that a child brought to a Buddhist monastery to be raised as a monk never had a chance to choose, or to protest. They never ask themselves how would they feel if Catholic priests or friars were selected in the same way. They are so vocal in the defence of animals and will love to tell you how nice Indian people are to cows, but will readily forget how less nice they are to the starving and to the widows. (Yes, many widows die in India today of strange domestic accidents. Doesn’t happen by us, strangely enough).

This doesn’t want to be a generalised condemnation of Indian society. I am sure many excellent people (Hindu, Muslim etc.) live and have always lived there. But you can’t take Sodom out of Lot, and you can’t avoid the belief in reincarnation causing an amount of indifference and acceptance of starvation and violence just inconceivable by us.

And so it happens that whilst Western countries nowadays provide up to one fifth of the GDP of countries thousands of miles away, out of sheer compassion for people they’ll never see, Sri Lanka drowns in a sea of corruption even after a disastrous tsunami, with entire categories of citizens enriching themselves out of the money meant to save their own people from tragic death and utter destitution.

Reincarnation is not only wrong but when applied to entire populations for generations, sooner or later it will create the conditions for the toleration of every aberration.