Lessons From The Imam

One week later, the controversy still rages about what the Imam has said in the Vatican; who is or is not a kafir; whether the verse was intended against Christians, and the like.

Another stunning example of the breathtaking incompetence, bordering on sheer idiocy, of the Bishop of Rome.

Do you think he learnt the lesson, and decided never again to host such a stupid gathering of heathens on the ground of the Vatican?

Rather, he will likely react with another rant against those who have “certainties”.

“Sharing our experience in carrying that cross, to expel the illness within our hearts, which embitters our life: it is important that you do this in your meetings. Those that are Christian, with the Bible, and those that are Muslim, with the Quran. The faith that your parents instilled in you will always help you move on.”

Terry Jones Is Not A Genius But He Certainly Has a Point, Part I 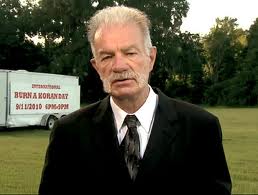 Ashes to ashes after all....

One can safely say that Terry Jones is, well, not a genius. One is at a loss to understand how a man can decide:

I do understand that some of our erring Proddie brothers make a great deal of what they imagine the Holy Ghost is telling to them, but from the way Terry Jones acts the Holy Ghost would seem to be rather unstable; which leads us to the unavoidable conclusion that the unstable one is, well, Terry Jones himself.

The Terry Jones saga now has a new chapter written (er….. burnt?), as the man, probably on the look for some more attention or needing some money, decided that the Holy Ghost has evidently changed his mind once again and has organised a sort of trial of the Koran (these people complain about the Holy Inquisition, I am sure…) at the end of which they, well, decided to burn it.

Let me say what I think of this specific action:

1) It is perfectly within the right of Mr. Terry Jones, or of every Mr. Joe Average, to burn a Koran. Mr. Jones lives in the Land Of The Free (USA) instead of in the Land Of The Politically Correct Cowards (United Kingdom) and he therefore has all the rights to exercise his freedom as he thinks fit.

2) The idea of staging a “trial to the Koran” is very childish. It shows once again that the man is on the look for a publicity stunt, and that his followers are certainly not picked amongst the brightest minds of that great nation.

3) The idea of burning the Koran (instead of, say, pronouncing the Koran heretical, or blasphemous, or outright idiotic and leave it at that; it’s a book, for Heaven’s sake, and it’s not even a trial!) is further proof that the man will do whatever brings him some notoriety. I am still waiting for an explanation from him about why the Holy Ghost would change His mind so often on the matter, but perhaps I’m asking too much.

In conclusion, I think that we can safely say that the man shows all the worst traits of Protestantism and is, certainly – not because of the burning of the Koran in itself, mind; but because of the ridiculous “Holy Ghost circus” and “wannabe Inquisition” habits of his – not good publicity for Christianity.

Having said that, the man most certainly has a point.

Which will be the subject of the next blog post.

Comments Off on Terry Jones Is Not A Genius But He Certainly Has a Point, Part I