After Yoko Ono’s revelation that the two had a bitch-to-bitch fling,  and we therefore officially have a Dyke as a candidate to the Presidency, we must now reflect about Hillary’s well’known admiration for Adolf Hitler; no, wait, I mean the petticoat version, Margaret Sanger.

It seems to me that, in many of those people who relentlessly hate Christian values, the motivation for their hate is to be found in hidden, deeply disturbing tendencies.

The “progressive” priest or bishop, the “open-minded” politician, down to the many oh so “tolerant” commenters on blogs and fora all have the same trait: they are perverts, but they don’t tell you. And this perversion colours, dominates their entire existence; because they are put instead of the fundamental choice of deciding whether they are intrinsically bad, or Christianity is.

One can’t be – no matter what they say – a Lesbian on the side; every Dyke must know that her tendency is something big going on in her life; something that puts her head-on against the Church.

Look at Crooked Dyke, then. She has been a Lesbian her entire life. It is, therefore, obvious to every thinking person that a life of pro-abortion, Nazi-like propaganda was simply the product of a deeply disturbed personality.

Alas, these politicians, priests, bishops and commenters never tell you this, until they get outed of ones forces them to come out (a politician can lie to her tomb, but your garden variety commenter will find it far more difficult to deny, once repeatedly challenged, what he thinks such a defining part of himself).

And there we have it. I wonder how many closeted fags and dykes influence our political and religious discourse under the disguise of being “social”, “caring” or otherwise “progressive”. I talk here not only of Clinton, but of people like “Tucho” Fernandez, Father “I will sue you” Rosica, Cardinal Schoenborn, or Francis himself. How many of them are hidden dykes? How many of them are secret queens?

Never trust anyone who tells you something blatantly against common decency and Christian morality. Whenever you hear such a one, ask him in his face if he is a homo. His facial expression might tell you everything you need to know about his argument.

Why, Oh Why Are Lesbians So Fat? 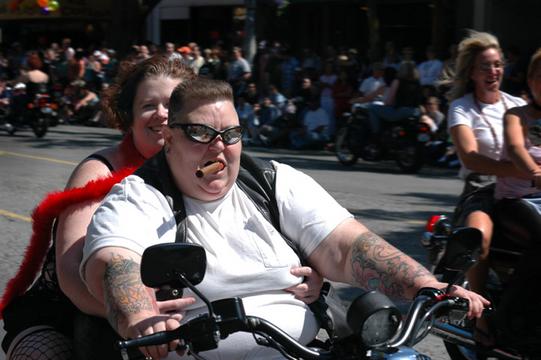 I wonder why they’re so fat…

‘The National Institutes of Health (NIH) has awarded $1.5 million to study biological and social factors for why “three-quarters” of lesbians are obese and why gay males are not, calling it an issue of “high public-health significance.” ‘

This is the beginning of an article explaining to US Citizens with a brain how their own super-indebted government wastes their tax money to further an homosexual agenda and keep (as in: “kept woman”, “kept liberal”) stupid liberals in possession of some even more stupid degree in non-gainful employment.

The good news is that the “study” will not only research why dykes are obese, but also why fags tends to be abnormally thin. So it’s $750,000 for each category of perverts. Boy, that’s cheap.

So, why are dykes fat and fags thin?

Dykes are fat because they hate not only themselves, but their own god-given feminine nature. Therefore, they deform themselves to the level of barely recognisable humans, and carry around 300 or more pounds of rebellions against patriarchy, homophobia, and the likes. A dyke is a freak show inside. No wonder many of them become freak show outside, too.

Fags, on the other hand, are thin because many of them are either ephebophiles themselves, or want to be screwed by those who are. Hence the necessity of looking like a boy. You see the same in the models – both male and female – walking around in many catwalks in the West, all of them looking like boys.

One and a half million dollar of the taxpayer saved.

But wait: this means that there will be no scrounging opportunity for “researchers” who are absolutely sure to vote for the Democrats! No opportunity to further an atheist, anti-Christian agenda! No leftist brainwashing opportunity! Aaaarrgghhhh!!!!

‘The National Institutes of Health (NIH) has awarded $1.5 million to study biological and social factors for why “three-quarters” of lesbians are obese and why gay males are not, calling it an issue of “high public-health significance.” ‘

The Dykes, The Dog And The Judge 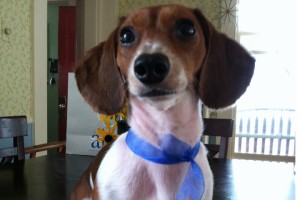 The pet of two dykes. What a dog’s life…

In a country – or a planet – that becomes more and more mired in its own stupid chase for easy emotions, a new low seems to have been reached with the New York judge (apparently a man; can’t imagine he is straight, though) deciding that in the “divorce” cause between two dykes (I’d love to see the photos of these beauties) the dog must be considered as if he were a baby; because you see, the dog does not belong to (duh) the owner of the dog, but must go to the dyke who can show that she provided to the “emotional needs” of the dog in the best way according to… the judge. In the end – the judge seems to think – dogs can certainly not be bought and sold, right? Can’t wait for the canine Wilberforce troops declaring pet shop owners slave masters and outright bastards.

The article has other funny points: the dog is now two years old but was bought when it was 10 weeks old; this shaves two and a half months out of the two years. At that point, the dykes were (how oh so romantic) “girlfriends”, and the dog was given as a consolation because one of the two had forced the other to… give away his pet (no, it’s not a grammatical mistake).

In the short space of nineteen and a half months, the dykes managed to get (or so they think) “married”, to divorce, and to bring the canine controversy to the judge.

I am impressed. These dykes are able of very stable relationships. Those with their dog, for example.

Cue one of the dykes coming all new age / hindu to us by stating about the dog:  “He is my little soul mate, and there was no way in this lifetime I could ever live without him.” In this lifetime. Probably, she wants to reincarnate in a fatter dyke. Or perhaps in a dog.

Not that she is far away from that, mind. Two quarrelling dykes: can you imagine the bitchiness?

Comments Off on The Dykes, The Dog And The Judge

The Sins Of The “Mothers” Shall Be Visited Upon The Children.

I like to write (you have noticed it already), so I could go on about this forever.

Still, I wonder why I should, as the number speak so well for themselves.

The numbers are, in fact, neatly put together below, courtesy of the Washington Times:

Nothing  else to say, really.

But no, let us go on with these stupid, pervert, heathenish social experiments.

Nothing Compares To Your Idiocy: Sinead O’Connor.

The boy needs to grow up a bit.

One of the most salient traits of modern society is the fact that people claim – and are given – credibility just because they happen to be famous.

A beautiful example of this is Sinead O’Connor. I can’t imagine any other age in which an unstable lesbian with rather hysteric ideas, a penchant for suicide and in general rather fit for a specialised establishment for mental illnesses can ordain herself – or be ordained by some other clown – a “priestess” and be taken seriously. In every other age, people would say to her “yes, dear” and care that there are no knives lying about.

Not with this lady (boy?), though. We are here in front of a person who married four times – showing an admirable ability to stick to her own decisions – threw in some lesbianism just for the fun of it, and made other rather extraordinary things like tearing a photo of the Pope, “the real enemy” (of unrepentant lesbians, yes!), and rant about child abuse as if it was something the Church specialise in. Which is very funny, because in order to see a prime example of sexual perversion she needs to do no more than look at the mirror.

Is it a surprise that such egomaniacal people should twitter around that they need sex, or that they feel suicidal and need a doctor and ask tweeters to find her – a rich woman with access to the best of the best – one; or marry the same person they divorce a couple of weeks later? Come on,  who would take such people seriously in real life?  The lady (boy?) should go back to kindergarten and seriously start working on becoming a halfway responsible adult instead of the whining, passive-aggressive, manipulative lesbian bitch she is.

“Oh, but she, oh, has, oh, bi-po-lar, oh, di-sor-der”, I hear (the usual) people say. Bipolar disorder, my foot. If you know you’re unstable, don’t behave unstably in public. If you can’t avoid behaving unstably in public, you are ripe for the above mentioned specialised structures.

But no: this pervert, never grown prepubescent cretin will continue to make pathetic headlines with every anti-Catholic rant whilst the usual idiots will continue not only to justify whatever she does, but to continue to see in such example of self-centred immaturity or outright stupidity and perversion some kind of guiding light for their own agenda.