The Little Crown Of Mary 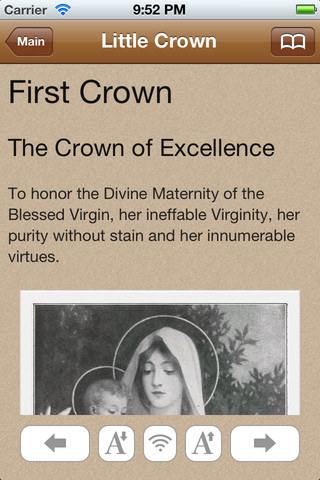 The Little Crown of Mary is just another of those many Catholic devotions considered, erm, too Catholic by the geniuses who gave us the Second Vatican Council and assorted side effects, and that are now coming back to public consciousness and worship. You will find some nice applications if you look.

As for the Rosary, several variations are known and practiced, but the devotion revolves around the recitation of twelve Hail Marys mixed with three Our Father. The twelve Hail Marys are certainly a tribute to the “woman with upon her head a crown of twelve stars” of the Revelation, and I hope I am not very far from the truth in supposing that the three Our Father are a tribute to the Most Holy Trinity.

The man who gave the Little Crown his actual character appears to have been St Louis de Montfort, but like the Rosary the Little Crown can be expanded or embellished with accessory prayers.

The version I use is based on the division of the Hail Marys in three groups of four “crowns” each, with each group devoted to the meditation about a particular aspect of the Blessed Virgin: the Crowns of Excellence, Power and Goodness.

After the Sign of the Cross and an introductory prayer, each group of four Hail Marys, introduced by a short reflection about the relevant Crown, is preceded by the Our Father and concluded by a Glory Be. A short concluding prayer and the sign of the cross end this beautiful devotion.

Typically, though, every Hail Mary will be accompanied by short invocations, different for every Hail Mary, extolling the virtues of Mary in accordance with the Crown being prayed: these additional prayers were introduced by Louis de Montfort, and with their individual character are a great help in trying to avoid the mechanical repetition or the wandering away of the mind that, as you have certainly noticed, are never far away from the recitation of the Rosary (and which, may I add, constitute a part of his charm and challenge).

The individual prayers and the shorter time required for the recitation make of the Little Crown an ideal pious exercise when you have your laptop or tablet with you and are in the middle of a short “break” (say, a short bus ride, or the like), besides being of course easily prayed at home.

Bear in mind, though, that the complete devotions with introductory and closing prayers and the individualised invocation will require a non indifferent memorisation effort if you want to pray this devotion without external help; though you can always revert to a more simplified version if you like, like the one without the invocation and choosing as introductory prayers some perhaps already known prayers like, say, the Creed of the Apostles and the Memorare, or the Hail, Holy Queen and the Memorare again.

I am far from suggesting you should pray this beautiful devotion in substitution to the Rosary: there is simply no substitute for the Rosary, nor is the Little Crown surrounded with the power and glory that have accompanied the Rosary for many centuries now; not to mention the promises of Our Lady tho those who pray the Rosary devoutly and faithfully every day, the real Big Bertha cannon against the Devil and his evil companions.

Also notice some apps allow you to set an automatic reminder, which once set up at an opportune time (when you know you are in front of your computer or tablet) will be of further help.

Modern technology can do much for us, and it is absolutely amazing how much technology is doing to revive old Catholic devotions our conciliar… stepfathers wanted neglected and ideally forgotten. The ways of the Lord and those of the Clergy are sometimes rather divergent.

I suggest you look around and see what you can find that suits your available devices and your inclination. The material on offer will certainly grow.

We must fight of course, but we must pray too. This blog is rather more focused on the fight aspect, but this does not mean prayer should be neglected; besides, you can also consider that the recovery of old traditions we were supposed to leave behind us are, in a way, also part of the fight…